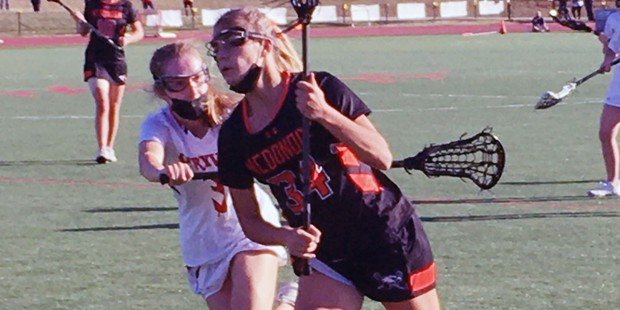 It’s not always easy being McDonogh School, although it’s probably a lot of fun to be a part of a program that boasts a 223-1 record with 10 IAAM A Conference titles since 2009. 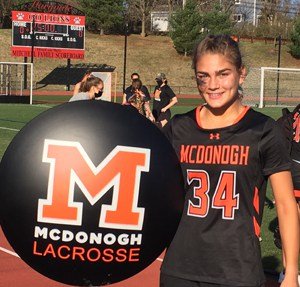 Junior midfielder Kori Edmondson earned the McDonogh shield for scoring a game-high five goals in a hard-fought 10-8 IAAM A Conference victory over Maryvale Prep on Friday afternoon in Brooklandville.

As junior midfielder Kori Edmondson noted after scoring a game-high five goals in a hard-fought 10-8 victory over Maryvale Prep on Friday afternoon, most opponents relish the idea of knocking off the Eagles (4-0 overall and IAAM A).

“We always get their best shot,” the Maryland commit said.

The Lions (2-2, 2-2 IAAM A), fresh off a couple of taut one-goal victories over St. Mary’s and Archbishop Spalding, confirmed Edmondson’s assessment by giving McDonogh all it could handle on a warm and windy afternoon in Brooklandville.

Maryvale jumped out to a 2-0 lead with extra-man goals by senior attacker Payton Rowley and her junior sidekick Courtney Savage before the Eagles responded with a Edmondson-fueled run to take a 6-2 advantage with just under 10 minutes left in the first half.

Courtney Savage, and her sister, Lauren, each scored goals in the final five minutes of the period to keep Maryvale within shouting distance at 6-4.

The Lions kept the momentum rolling in the second half when Courtney Savage netted a short-handed goal on a Rowley feed and Rowley put in a sweet behind-the-back shot with a defender on her hip to knot the score with 21 minutes remaining in regulation.

“I’m just glad I didn’t hit her (with the ball),” Rowley said about the defender.

After Maryvale sophomore goalie Lizzie Francioli made a tough save and the ball bounced in front of the goal, a mad scramble ensued and Makena London alertly scooped in the go-ahead goal a couple of minutes later.

An extra-man goal by Edmondson gave the Eagles some more breathing room at 8-6.

Maryvale sophomore attacker Kendall Barnes converted another Rowley feed with just under three minutes left to make the score 9-8 and set up the dramatic conclusion.

With two minutes to go, a yellow card gave the Eagles a man advantage and they played keep-away until Edmondson struck again with just four seconds left.

“We started out with that yellow card (36 seconds after the opening draw) and then we had to grind it out,” Edmondson said. “We knew Maryvale would be tough competition. They came out with a lot of (defensive) pressure. That was kind of a big shock because we aren’t used to that. But once we settled down, we played a lot better.”

That early 2-0 deficit caught the attention of McDonogh coach Taylor Cummings and her players.

“Being man-down in the first 36 seconds is not what we wanted,” she said. “But we have a lot of young players and this was their first varsity game that’s been close. Maryvale’s a tough team and they have a lot of good players. I’m proud of the way we responded.”

Maryvale coach Kim Dubansky has every right to be just as proud of her team’s effort.

The Lions showed no fear and did not shrink against such a vaunted opponent.

“We’re playing to win,” she said, “rather than playing to not lose. Our players wanted the ball in big moments. We have a team-first mindset and we want our players to take risks.”

Dubansky pointed to sophomore defender Elizabeth Garcia for being a big reason why the Eagles struggled at times on offense.

The victory for the Eagles sets up yet another showdown with title aspirations when they host 4-0 Bryn Mawr on Wednesday in Owings Mills.

Maryvale will travel to Severn, also on Wednesday.

Pictured above: McDonogh junior midfielder Kori Edmondson hustles up the field despite the tight defense of Maryvale junior midfielder Lauren Savage in the Eagles’ 10-8 IAAM A Conference victory over Maryvale on Friday afternoon in Brooklandville.