McDonogh comes from 10 down to top No. 2 Roland Park Country 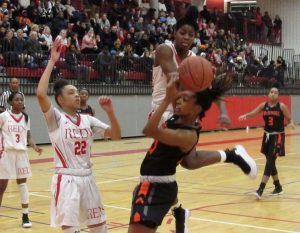 Roland Park’s Mir McLean slaps the ball away from McDonogh’s Kayla Liles during the first half of Wednesday’s IAAM A Conference girls’ basketball contest. The No. 3 Eagles overcame a 10-point first half deficit, winning 53-45 over the second-ranked Reds in Baltimore City.

In the final two minutes of the first half and first five minutes of the second half, No. 3 McDonogh School’s girls’ basketball team completely changed the tenor — and ultimately the outcome — of an Interscholastic Athletic Association of Maryland A Conference battle against second-ranked Roland Park Country School on Wednesday evening.

Coach Brad Rees described his team as being “back on our heels,” until the Eagles took a complete 180-degree turn and total command of the game by going on a 22-4 run to turn a 25-15 deficit into a 37-29 advantage.

The host Reds never got closer than four points the rest of the way as McDonogh prevailed, 53-45, to set up a showdown against No. 1 St. Frances Academy on Feb. 19.

In order to remain perfect in league play by the time they meet the Panthers, the Eagles, who are 11-1 overall and 3-0 in the A Conference, will have to defeat John Carroll on Jan. 12.

If they can play the way they played against Roland Park, which suffered its second loss of the season to Long Island Lutheran over the weekend, that goal should be readily achievable.

For one thing, dribble-drive penetration by Rees’ five-guard alignment helped the Eagles earn an impressive 21 trips to the free-throw line where they connected 16 times — 76 percent — while Roland Park only converted twice in seven tries from the charity stripe.

Junior guard Aleah Nelson then took charge by nailing a three-pointer that cut Roland Park’s lead to 25-22 and then deadlocked the score 19 seconds before the intermission when she converted a feed from senior Kayla Liles into an old-school three-point play.

Junior Treasure Valdez’s coast-to-coast drive to open the third period gave McDonogh its first lead since the middle of the opening period and the Eagles were still not done with their rally.

A baseline drive by junior Jessica Booth was followed by a Dixon jumper to give the Eagles a 31-25 advantage.

Junior guard Ja’Niah Henson finally got the Reds (13-3, 2-1 league) back on the board with a baseline runner, although McDonogh countered when Booth found Valdez underneath for a bucket and Dixon went 1-for-2 from the foul line for a 37-29 bulge with just under three minutes remaining in the third quarter.

Even though the Reds had plenty of time to recover with nearly 10 minutes of regulation remaining, they were unable to beat the Eagles for the first time since December of 2014.

“After we got into foul trouble, it changed our substitution pattern,” Roland Park coach Scott Buckley said, alluding to the fact that sophomore star Mir McLean (16 points, 17 rebounds) was relegated to the bench late in the first half. “And they made a nice run with Mir out of the game.”

“We used the press the whole game,” Dixon said. “That’s always been our philosophy — and we stuck with it.”

Rees praised Dixon for minimizing McLean’s impact as much as she could,

“Our focus was to stop Mir and stop their transition, where they get a lot of their points,” he said. “And that’s the beauty of the press. Sooner or later it gets to you. It’s tough to handle mentally and physically for an entire game.”