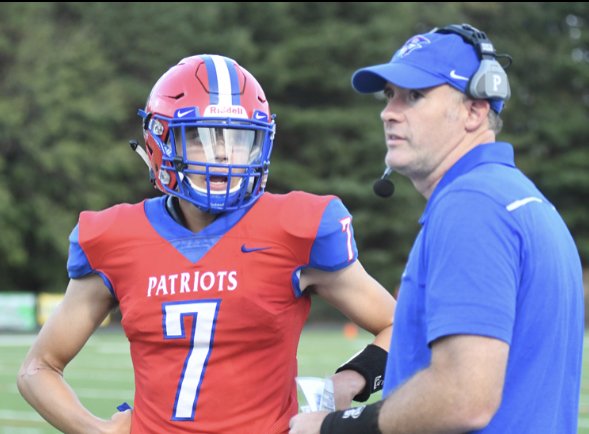 Chad McCormick (right) has stepped down after a successful decade-long stint as Old Mill football coach. He was VSN’s Coach of the Year in 2011 after leading the Anne Arundel County school to the Class 4A state championship.

After 10 seasons, Chad McCormick has stepped down as Old Mill High football coach. In a letter to the Old Mill community on the school’s athletic website, McCormick said he wants to spend more time with his family including two young sons.

McCormick guided the Anne Arundel County school back to the 4A state final in 2014, losing to Montgomery County’s Northwest. The Patriots reached the state postseason in McCormick’s first six seasons, part of an 18 consecutive playoff appearances.

That streak ended in 2017. The Millersville school returned to postseason play in 2019, losing to eventual 4A state champ Prince George’s County powerhouse Henry A. Wise in the state semifinals.

Old Mill went 2-1 in a truncated spring season because of COVID-19. McCormick posted a 77-12 mark in Anne Arundel play with four league championships.

McCormick, a 6-foot-6 Pennsylvania native who played basketball at Penn State Hazleton, had no football experience when former Old Mill varsity coach Mike Marcus hired him as junior varsity coach in 2004. He became a varsity assistant under Damian Ferragamo in 2006.

The Patriots won their first state title in 2009, defeating Wise at M&T Bank Stadium. McCormick was promoted to coach when Ferragamo stepped down after the 2010 campaign.

“I have had the opportunity to coach with many great football coaches at Old Mill who have sacrificed their time and made an all-in commitment…Words cannot express the appreciation I have for the many assistant coaches I have had on my coaching staff,” McCormick said, recognizing Craig Eckenrod, Mike Pfisterer Sr. and Jim Grim, who been on his staff since 2011.

McCormick thanked the players, families and administrators who have supported him at Old Mill.

“I am so appreciative of the commitment that the Old Mill Football players have given to the program,” said McCormick. “The game of football has helped so many of our athletes to develop great character and to be positive citizens and role models of the Old Mill community.”

McCormick is one of several area coaches who have stepped down. South River’s Ed Dolch and Marcus Lewis from Marriotts Ridge resigned their football positions.

Dolch went 32-33 in seven seasons at the Anne Arundel school, posting the program’s first perfect regular season in 2019 (won Anne Arundel title; finished 10-1 on season). In 2018, the Seahawks won their first postseason game in 32 years and reached the Class 4A East Region final.

Lewis posted a 41-36 mark in eight seasons at the Marriottsville school, guiding the Mustangs to a share of the Howard County title in 2019 and its first postseason victory.

Marcus Lewis will be returning this winter for a third stint as Marriotts Ridge’s boys basketball coach this winter. He started the Mustangs’ program in 2005 and stayed until the 2009-10 campaign. Lewis coached again in the 2012-13 and 2013-14 campaigns.