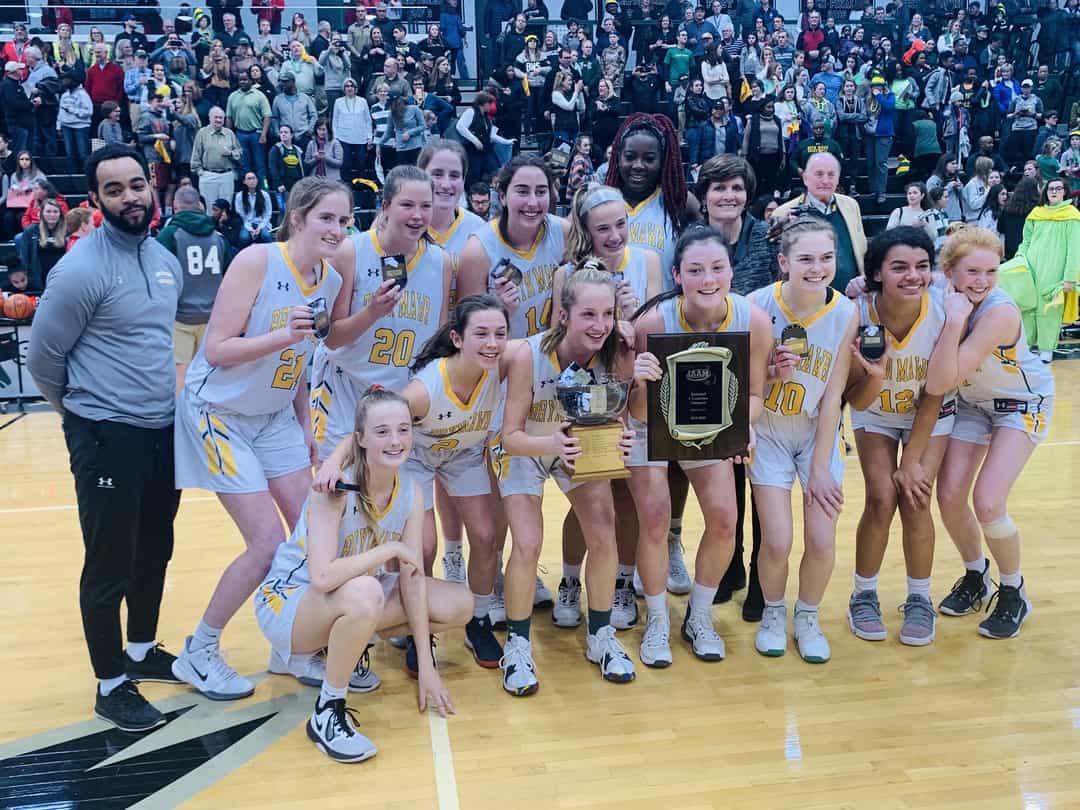 Sophomore guard Brooke Vinson had a game-high 17 points and four steals to help Bryn Mawr hoist the glass bowl for the second time in three seasons.

“We’re all good basketball players,” Vinson said. “But it was a whole new team this year, so it was a big adjustment for us.”

The Mawrtians didn’t make it the final last year, something that stuck with senior Abbey Hulbrink, who was on the 2018 championship team, for the entire season.

“Last year was a pretty big lead down for us and this year was our revenge season,” Hulbrink said. “Winning this championship is attributed to everyone’s hard work and the chip we had on our shoulders all season.”

The freshman duo of Phoebe Bannon and Hailee Ford lead the second-seeded Saints in scoring with nine points each. Bailey drilled a three-pointer on the left side of the court to put the Saints up 3-0 to start the game. The Bailey triple would be the only points for Concordia; the Mawrtians closed out the quarter going a 9-0 run with Vinson and Francesca Polito scoring three points each.

Concordia Prep (21-11) got back-to-back trifectas from junior DeShae Garner and Ford to knot the game at 9-9 to start the second quarter. Just as they did in the first quarter, The Mawrtians once again went on another 9-0 to close out the second. Hulbrink and Vinson accounted for all points during Bryn Mawr spurt scoring four and five points, respectively.

For the majority of the season Bryn Mawr has played man-to-man defense, but in the title game the Mawrtians went with a 2-3 zone defense to clog the middle. That defensive game plan deterred the Saints from attacking the basket and forced them to settle for contested shots from beyond the arc.

“We wanted to protect ourselves from getting fouls early, also we are long and quick so that we can clog up the lane and force the outside shot,” Walters said. “We forced a lot of outside shots and they couldn’t hurt from both the outside and inside.”

Bryn Mawr’s lead ballooned to 12 thanks to a 6-3 run to start the third quarter with free throws from senior Alison Harbaugh and Vinson and a Favour Udeh put back. Concordia Prep struggled to get back into the game for the remainder of the third and the early parts of the fourth.

Junior Zoe Faraone pilfered the ball from the Saints just before midcourt and dished the ball to Udeh for a fast break layup. Vinson got a quick score off a steal and went to coast-to-coast for a layup of her own to put the Melrose Avenue school up by 13 with just over six minutes left.

“Our team is very young and their height, especially in the post, really bothered us,” Concordia Prep coach John Cooney said. “Every time we tried to cut the lead down they just pulled away.”