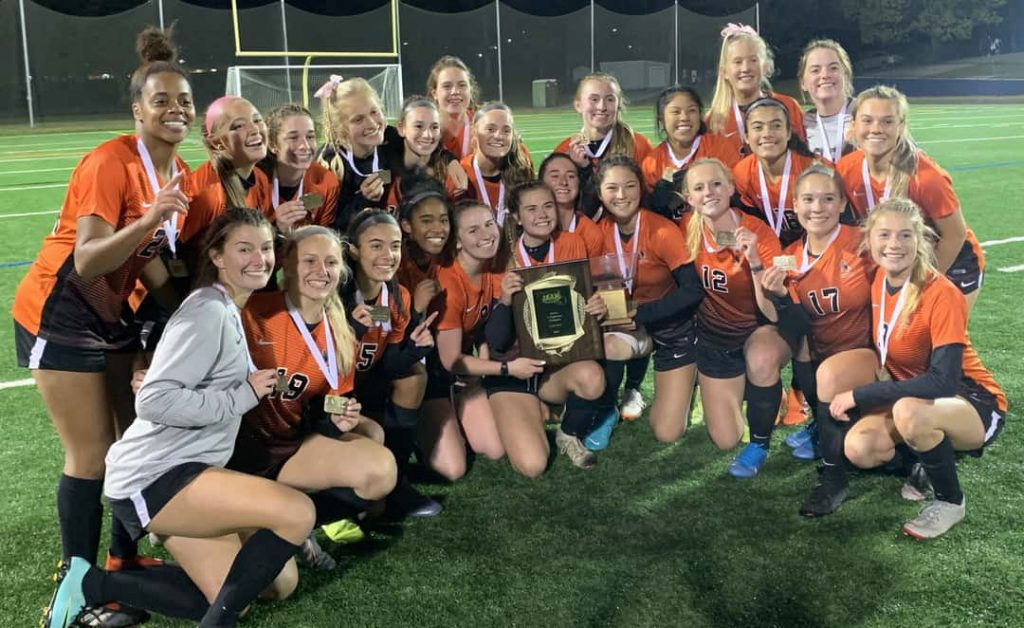 McDonogh School’s No. 1 girls soccer team had no trouble creating offense in the first half of Saturday night’s IAAM A Conference championship. The Eagles just didn’t finish.
With a handful of near misses — wide, high and off the crossbar, it was just a matter of time before the Eagles broke through.
In the 60th minute, senior midfielder Lilly McCarthy drew a defender and passed to junior striker Baylee DeSmit, who drilled a low shot from about 15 yards out past the right post.
Over the next 15 minutes, DeSmit and McCarthy each added a goal to give the Eagles a 3-1 victory over No. 2 Archbishop Spalding at CCBC-Essex for their third straight A Conference championship and their eighth title in 10 years.
“It was a lot of halftime talk of not going out with a loss and fighting for each other, especially our seniors. We didn’t want to end some of their last games as a loss. We all wanted this one very badly,” DeSmit said.
McCarthy said the Eagles had practiced that play Friday and that she had “200 percent” confidence that DeSmit would scored off her pass.
The Eagles (17-1) finished the season with 10 straight wins, bouncing back from a 1-0 loss to No. 3 Mercy on Sept. 26. McDonogh had not lost to a team other than Spalding in two years and that setback added even more motivation to their title quest.
“It was very humbling, kind of like pulled us back to earth,” McCarthy said of the loss, “and we were like, ‘We are not losing anymore, that’s an awful feeling and [we] pulled ourselves together.”
Eagles coach Harry Canellakis praised his players for how well they absorbed that loss which knocked McDonogh out of the national No. 1 ranking in USA Today’s Super 25.
“I think people were surprised, we were surprised with the way the players handled themselves in that game and the bounce back from that game, and just having to fight through adversity in that moment — because I felt like we played really well after that — is really what I’ll remember about this year,” said Canellakis, whose team is now ranked ninth by USA Today.
This is the fifth time since 2010 that the Eagles and the Cavaliers (14-2-1) have met in the title game with the Eagles winning four times.
One or the other has claimed every A Conference soccer crown since 2009. The Cavaliers, who also won in 2006, have four championships.
Ten days ago in a defensive battle, the Eagles defeated Spalding, 1-0, on a DeSmit goal in the 66th minute. That game could have gone either way. Saturday night’s game, which started 90 minutes late after the B and C Conference games went into overtime, had a much different feel to it from the start.
The Eagles first chance came about 90 seconds into the game. They had six corners in the first half and several nice runs down the outside, including one from speedy sophomore Kelsey Smith, who crossed the ball perfectly with 12 minutes left in the first half.
“I thought we played really well in the first half,” Canellakis said. “In a game like this, where it’s so tight it came down to moments, I think we won the moments in the second half. That was the only difference between the first half and the second half.”
The Cavaliers had a few chances of their own and Eagles goalie Maddie Lowney stopped three shots in the first half. The longer McDonogh remained scoreless, the more likely the game could be a repeat of the first meeting where one opportunistic goal from either side could win it.
DeSmit, who scored three goals in last year’s 5-0 championship win over Spalding, took care of that with her first goal. The Cavaliers then had to take some risks on defense and press for a goal to even the score.
“The last two goals came because I changed formations to try to catch a game,” Spalding coach Ashly Kennedy said. “[If] you don’t do that and you sustain it, they probably wouldn’t have gotten those last two goals. They both came off deflections. When you’re down, you have to make some adjustments.”
Kallie Wethern and Smith took the initial shots that Spalding goalie Emma Murray deflected, but they went right to DeSmit and McCarthy who boosted the McDonogh lead to 3-0.
Spalding’s Sophie Thibeault cut the lead to 3-1 with less than four minutes left in the game.
The Cavaliers, with just four seniors, lost only to McDonogh this fall. They defeated Mercy twice, including a 1-0 win in the semifinals.
“I’ve never seen a team that is built around the chemistry this team had this year,” Kennedy said, “and I’m so proud of them… The expectations going in, losing 14 seniors, … the way players stepped up and contributed in different ways brought our team together, really unified us.”
The Eagles will graduate seven seniors and return some of their best players, including DeSmit and Smith. They said being a close team helped them through the loss to Mercy to rebound and claim the title trophy. 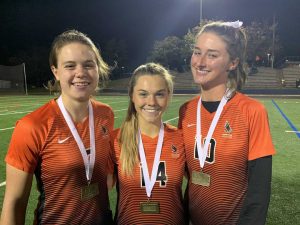 Baylee DeSmit, Kelsey Smith and Lilly McCarthy were the driving forces for McDonogh girls soccer Saturday evening. The top-ranked Eagles 3-peated as IAAM A Conference champ with a 3-1 victory over No. 2 Spalding at CCBC-Essex.

“Our chemistry is really good which helps every team in winning,” Smith said. “We’re all like best friends, sisters. We go through everything together. At school, we’re always together and we love each other, so we just play like that.”
“Not necessarily a team, but we’re a family for how well we connect with each other,” DeSmit said.
IAAM A Conference Soccer Championship
at CCBC-Essex
No. 1 McDonogh School 3, No. 2 Archbishop Spalding 1
Spalding  0  1  — 1
McDonogh 0  3  —  3
Goals: Spalding—Sophie Thibeault; McDonogh—Baylee DeSmit 2, Lilly McCarthy.
Assists: McDonogh—McCarthy, Kallie Wethern, Kelsey Smith.
Saves: McDonogh—Maddie Lowney 3; Spalding—Emma Murray 5.