Poly’s Lewis and Baldwin from St. Frances are VSN’s best in boys basketball; Clatchey nabs Coach of the Year honor 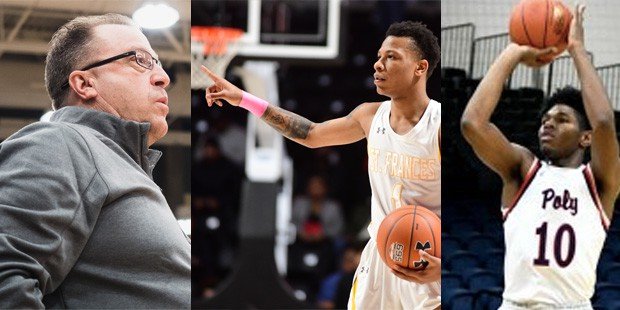 Though the Covid-19 pandemic brought an abrupt end to the 2019-2020 high school boys basketball season we celebrate those who achieved at the highest level on the hardwood this winter with the announcement of our annual VSN Boys Basketball awards.

Adrian “Ace” Baldwin cemented his place among the elite in the storied history of Baltimore basketball. The St. Frances Academy point guard is Co-Player of the Year.

Justin Lewis was the steady yet powerful force as Poly climbed into the national rankings. The senior forward is Co-Player of the Year.

Mount St. Joseph’s Pat Clatchey continued working his magic, bringing another championship banner to Irvington. The longtime coach is Coach of the Year.

Please enjoy our honorees’ stories below. 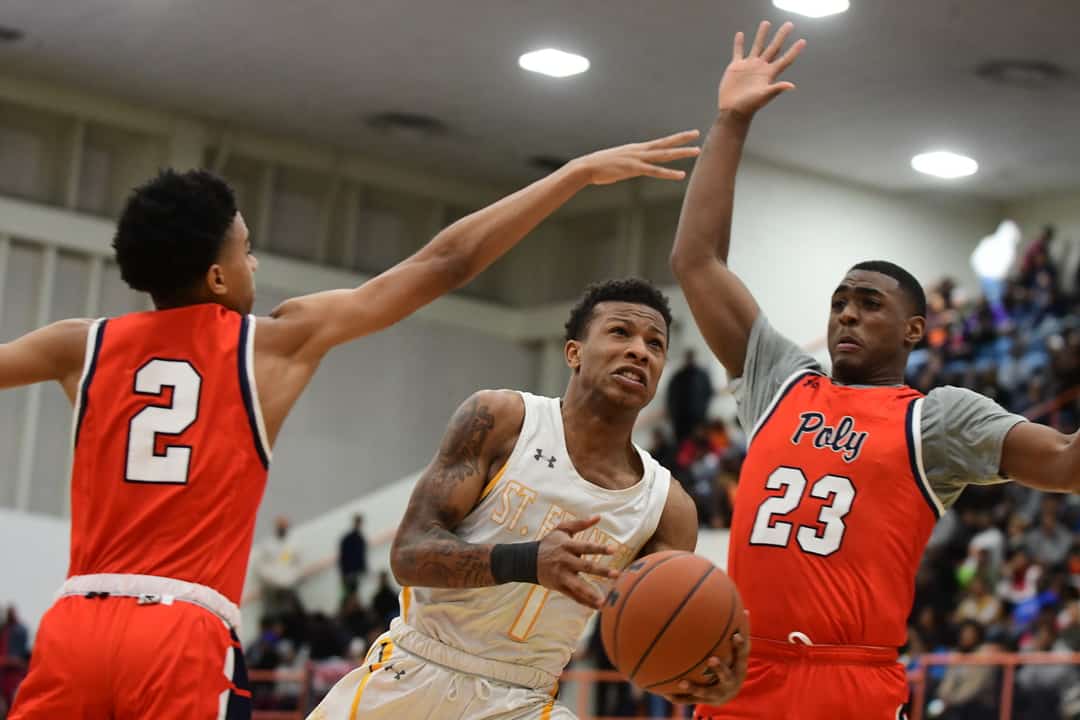 CO-PLAYER OF THE YEAR

At midseason, some observers wondered about Baldwin’s play. By season’s end, he carved his name among the best performers in Baltimore prep hoops over the last three decades.

Another title didn’t seem likely in mid-January as Baldwin and St. Frances struggled in a loss to crosstown rival Mount St. Joseph. He had a hairline fracture in his wrist, but some thought the loss of his father to cancer during the summer was affecting his play as well.

In front of a capacity audience at Morgan State University’s Hill Field House, Baldwin took over in the fourth quarter (nine points including six-of-six from free throw line), pushing the Panthers past then-No. 1 Poly. He went for 13 points in the final five minutes of regulation as St. Frances rallied from a 13-point deficit to stun Mount St. Joseph.

In the BCL Tournament at Loyola University, Baldwin dished out 16 assists in a semifinal victory over Loyola Blakefield. He capped his seminole career in the final with 25 points, 10 rebounds and five assists against Mount St. Joseph, helping secure the fifth 3-peat in the 49-year history of the BCL Tournament.

A three-time all-Catholic League and MIAA A selection, Baldwin joins former Patterson standout Aquille Carr as the only back-to-back winners of VSN’s Boys Basketball Player of the Year honors. He will play for Virginia Commonwealth University next season.

CO-PLAYER OF THE YEAR

Lewis was the epitome of consistency for the state’s best public squad this past season. The second-ranked Engineers continued their unlikely ascent into Baltimore basketball royalty.

The 6-foot-8 forward averaged 19.3 points, 13.4 rebounds and four assists for the Baltimore City champions. The Engineers (24-2), who gained their first national ranking (No. 18 by MaxPreps and No. 22 by ESPN) and dominated the area’s toughest public league for their third title in five seasons.

It started with Lewis, who imposed his will on both ends of the court. Defensively, he swallowed opponents with his rebounding and shot blocking (4.4 per game).

Those stops sparked Poly’s transition where Lewis dazzled with his quickness around the basket and perimeter shooting. He posted 18 double doubles, including a 27-point, 10-rebound effort against Frederick in the Class 3A state quarterfinals.

It would be Lewis’ final game as the Engineers’ bid for a fourth straight 3A championship was halted with the cancellation of the state Final Four due to the Covid-19 pandemic.

The area’s top senior prospect (No. 107 on Rivals.com’s Top 150 seniors), Lewis has lived up to expectations since transferring from Calvert Hall College after his freshman season. He averaged 15.2 points and 9.1 rebounds as a sophomore, including a memorable 36-point effort at previously undefeated Dunbar late in the regular season that spurred Poly to the city title.

Lewis averaged 17.3 points, 9.2 rebounds and 3.2 blocks as a junior, leading the Cold Spring Lane school to the first 3-peat in Class 3A. He finished with 16 double-doubles on the season.

“I think he has pro potential…you talk about a guy who can make plays for himself and for other people – he can make shots from the perimeter – he can run the floor – he can put it down on the floor and he get a rebound and push the full length of the floor – and get to the rim and make passes,” said Marquette University associate coach Dwayne Killings. “His usage will be high because of his versatility.”

Lewis, who compiled 1,374 points, led Poly to a 68-13 record in three seasons. He will suit up for Marquette, coached by former Cardinal Gibbons star Steve Wojociechowski, next season. 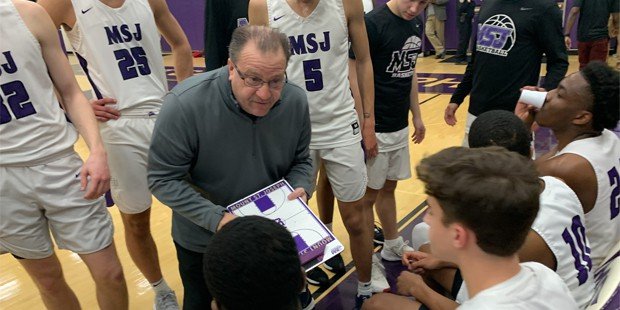 COACH OF THE YEAR

In a season dominated Poly and St. Frances Academy, Clatchey and Mount St. Joseph showed again why it’s been the preemiment program in Baltimore hoops for two decades.

The Gaels (29-6) won the MIAA A Conference championship – their first since 2017. The Irvington school defeated then-No. 1 and reigning champ St. Frances Academy in the final.

“We told our guys today we’re going to find a way to get it done,” Clatchey said.

Finding a way was the mantra for the third-ranked Gaels, who graduated 2018-19 Baltimore Catholic League Player of the Year James Bishop (George Washington) and saw promising 6-foot-10 center Javonte Brown (committed to UCONN) leave the program and return to his native Canada during the offseason.

There were some early stumbles, but Mount St. Joseph found its stride, beating nationally-ranked St. Frances Academy twice. The Gaels had their Baltimore City rival down 13 points in the fourth quarter before the Panthers, behind two-time VSN Boys Basketball Player of the Year Adrian Baldwin, rallied for victory on Valentine’s Night.

Mount St. Joseph ran out of gas in the BCL Tournament final (lost to St. Frances), but Clatchey got the most out of his roster. Senior Jason Edokpayi emerged as one of the area’s best players while the backcourt of Tyler Brelsford, Ausar Crawley, Antonio Hamlin and D’Angelo Stines was steady. Junior Sean Carr and senior Will Sykes held their own in the Gaels’ frontcourt.

“We didn’t have the most talented team, but we had a good team that played well together,” said Clatchey.

Clatchey, who reached the 700-win plateau this season, was assisted by Damien Jenifer, Jordan Griffin, Doug Nicholas and Jared Woodley. In 28 seasons at his alma-mater, Clatchey is 712-152 with six MIAA A titles and seven Baltimore Catholic League tournament championships.