Sparrows Point’s Lynch and Dorsey from McDonogh are VSN’s best for girls soccer; Song is Coach of the Year 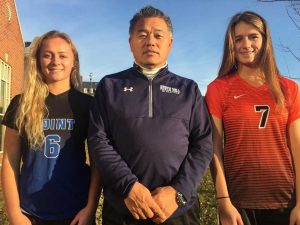 The cream always rises to the top. The old adage was true for the 2018 girls soccer season.

Julie Lynch reached rarified air while guiding Sparrows Point to another state championship campaign. The senior is VSN’s Player of the Year.

Julia Dorsey made a triumphant return to the playing field and helped McDonogh School continue its reign in the IAAM A Conference. The senior is VSN’s Defensive Player of the Year.

Brian Song took a young River Hill roster and molded it into champions once again. The veteran Hawk leader is VSN’s Coach of the Year. 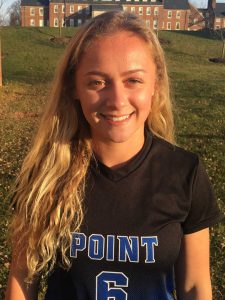 The steel mills that defined Sparrows Point for generations are gone. The southeast Baltimore County area is being revitalize with new commerce.

Lynch concluded her brilliant four-year varsity career with a third straight VSN Girls Soccer Player of the Year honor – the first athlete in any sport to accomplish the feat. The Pointers (16-0 overall) won their record sixth consecutive Class 1A state championship in the fall.

“I think it was a tough season because we had a tough schedule, but I feel our team came together,” said Lynch. “We had a few injuries, but had people on the bench who easily came in and play at the same level.”

Lynch who emerged as a vocal leader for the Pointers in the fall, set a lofty standard of excellence on the field. She had 17 goals and 12 assists in 2018.

Lynch tallied twice in Sparrows Point’s 4-2 victory over Washington County’s Smithsburg in the state 1A final at Loyola University’s Ridley Athletic Complex. She dominated the middle of the pitch with strong two-way play.

With Lynch, who posted 68 goals and 51 assists in her varsity career, Sparrows Point went 66-3 with three county titles and four state championships. She will play for West Virginia next fall. 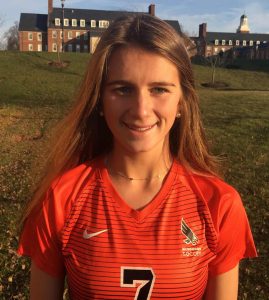 Since she was five years old, Julia Dorsey knew only one speed: Full. Then a tore ACL shelved her for about 10 months.

Healthy again, Dorsey left an indelible mark for McDonogh School during the fall. The senior fullback is VSN’s Girls Soccer Defensive Player of the Year.

“It was really great to comeback,” said Dorsey, who tore her ACL in late October 2017.

She was cleared to resume athletic activities late last spring. After wearing a brace during the summer for club lacrosse, Dorsey finally removed it the first day of soccer practice with McDonogh.

While it took a short time for Dorsey to get her soccer endurance, her intense effort level remained intact.

“Everybody works hard around Julia because she’s working so hard,” said Eagles coach Harry Canellakis said. “She really does bring up the level of our entire team just by who she is on the field.”

Dorsey was the quarterback of a McDonogh defense that allowed nine goals in the fall. The Owings Mills school (16-0-2) won its fifth IAAM A crown in six seasons.

Dorsey, a lacrosse standout who’s a defensive specialist for McDonogh’s basketball squad this winter, said her teammates deserve the credit.

“We have a really close knit team,” said Dorsey. “We’re built on our motto: You never walk alone.” 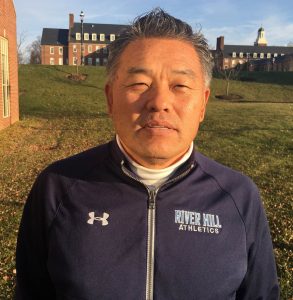 Brian Song wasn’t exactly sure how a young River Hill girls soccer squad would respond going into fall. But he did know about his program’s DNA.

“What has carried our program a little more than others I think they put the team before the individual,” Song said.

The Clarksville school has had unmatched success during Song’s nearly two decade long tenure. It was no different in 2018 for Song, VSN’s Girls Soccer Coach of the Year.

The Hawks won their third consecutive Class 2A state championship, outlasting Frederick County’s Walkersville. It was the third 3-peat for River Hill, all under Song.

The latest title may have been the toughest for River Hill, which roster consisted of 14 underclassmen including five freshmen and four sophomores.

“It’s tough to say on top,” said Song. “We had different people taking responsibility, whether that’s sacrificing on the defensive end or the midfield. The depth wasn’t as a great, but somehow, we put it all together.”

Song credited his assistants, daughters Kelly and Amy. He hopes one of them gets the opportunity to succeed him, though Song isn’t ready to retire.

His nine titles are the most by a public school coach. In 14 seasons in Clarksville, Song is 224-31.