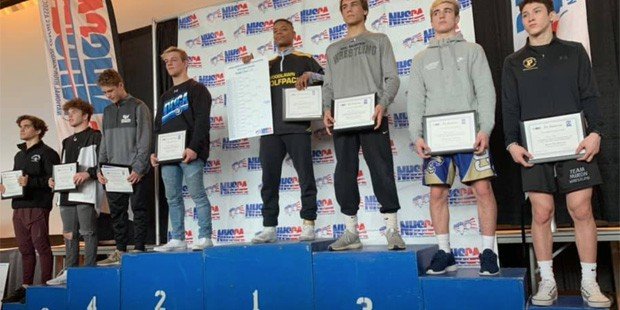 Sunday morning in Virginia Beach Owings Mills’ Phil Smith put an exclamation mark on the 2018-2019 wrestling season by throttling the No. 1 seed, Charlie Pickell (MN), 8-3, to win the 132lb Junior Division Championship at the NHSCA Nationals.

Smith, who was VSN’s 2018 Lower-Weight Wrestler of the Year, completed his second straight undefeated season at Owings Mills. In this year’s state finals, he and Glenelg’s Jared Thomas (who was an undefeated state champ at the time) put on a show in the finals, but Smith emerged the victor with a third-period fall and second state crown.

Pickell has a state title and state runner-up showing on his resume but proved to be no match for Smith. Upsets were Smith’s theme as he stormed through the bracket as an unseeded wrestler. In the semifinals, the Eagle got by the sixth-seed, Cade Balestrani (PA), 4-1.

Smith pinned North Carolina’s Heath Gonyer in the quarterfinals, 5:56. Gonyer picked off the No. 2 seed, Luca Errico (NY), 9-7, in his previous match. Smith crushed the No. 7 seed’s title dreams in his round of 16 match with a 10-4 win over Josh Medina (CA).

“It feels pretty good,” Smith said. “I’ve been trying for so long to get a national title. I was a little heated (about not being seeded). I had to push my way through. A couple people said I snuck in. I didn’t worry about the seeding. I didn’t look at the seeds (of the guys I wrestled). It (the finals match) was a little iffy. He got a takedown early, then I did a funk roll and put him on his back a little bit. And dogged him out the rest of the match. I had to break him.

McDonogh’s Cooper Flynn secured a Sophomore National title at 113lbs with a 5-1 win over North Carolina’s James Joplin. Cooper was given the top-seed and proved he was worthy with a title run that included four pins and a tech-fall. Flynn blanked the No. 5 seed, Logan Ferrero (MO), 6-0, in the semifinals.

McDonogh had three other grapplers earn All-American status this weekend. Richard Fedalen was third at 113 in the freshman division. Joining Flynn on the sophomore podium was Harrison Trahan (8th at 160). Jack Wimmer, a junior, placed fourth at 195.

Dunbar’s Jorden Pryor pinned his way to the finals, logging five in the books, where he ran into a buzzsaw from Massachusetts, No. 1 seed Yaraslau Slavikouski. Pryor, who was one of VSN’s Upper Weight wrestlers of the year in 2018, won three state titles and was awarded the three seed here. He flattened the No. 2 seed, Joey Slackman (NY), in the first period of his semi-final match, 1:19.

The finals bout with Slavikouski, who was a two-time National Prep runner-up, was tight until midway through the second period when the Poet pushed the action and came up on the short end of the ensuing scramble. Slavikouski put five on the board with the flurry and went on to win 13-5, or so it seemed at the time. It turns out Slavikouski is actually 21 (soon to be 22) and was, therefore, not eligible for the tournament.

This information came to light after the awards had been presented. How Slavikouski’s age went undetected over the three days of competition is unclear at this point. He was declared ineligible for this year’s National Prep tournament because of his age, so it is a mystery why he entered the NHSCA tournament, and even why his entry was allowed to begin with.

“I am glad that I’m finally a national champ,” said Pryor. “That’s all I wanted. That guy was really tough and I give god the glory, amen. I honestly thought I lost that match fair and square but as I said earlier, God was with me. And when I found out he had been disqualified, I honestly felt sad because I lost but cheaters never win. I’m a national champion and I know in my mind I’m a national champ.”

TJ Stewart, who wrestles at St. John’s in DC but resides in Maryland came into the Freshman Nationals as the No. 1 seed at 160lbs. Stewart brought the crown home with a 13-11 decision of Brian Soldano (NJ) in the finals. Stewart beat fourth-seeded Braden Welch (OH), 7-4, in the semis.

The top seeds clashed at 220lbs in the sophomore division finals with Georgetown Prep’s Kyonte Hamilton given the top spot over California’s Justin Darter, Jr. Hamilton made good on that prophecy with a 7-0 shutout. Hamilton marched to the finals with four pins and a major-decision.