Marszal triplets are at the heart of the nation’s No. 1 girls lacrosse team 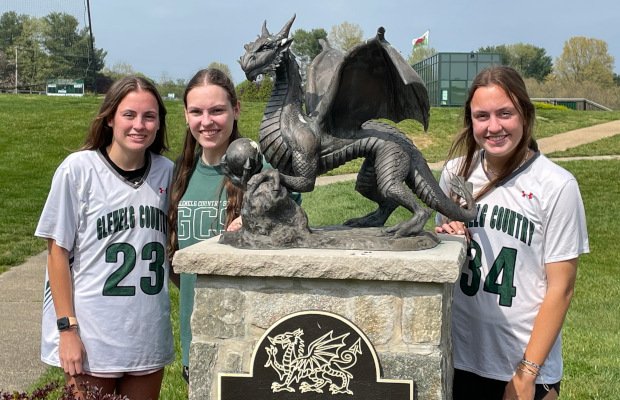 Jaclyn and Stephanie Marszal were still in class Tuesday afternoon when they learned their Glenelg Country School girls lacrosse team was ranked No. 1 in the country for the first time in program history.

“I looked at my Apple watch during last period,” Stephanie said, “and saw this picture from my dad, just a screen shot, not even of the rankings, just the headline, ‘Glenelg Country New No. 1,’ something like that, and we said, ‘Okay!’” 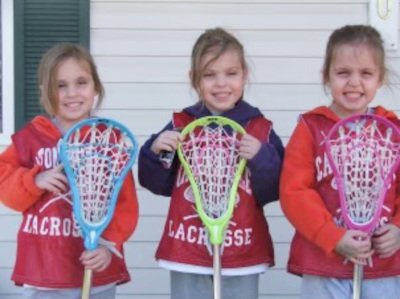 Stephanie, Jamie and Jaclyn Marszal (left to right) played lacrosse together in the Catonsville Rec program when they were 6 years old. Jamie eventually left the sport to follow her passion for music while Stephanie and Jaclyn continued to play. The three reunited this spring when Jamie joined the Glenelg Country School team as a manager to share the senior season with her sisters who have helped lead the Dragons to the No. 1 ranking in the nation.

Attacker Jaclyn and goalie Stephanie laughed with excitement recalling the message to the family group chat that included sister Jamie, the team scorekeeper. The triplets, who are seniors, could not be enjoying the final days of high school much more.

“To know that they’re the No. 1 team and knowing they’re giving all that they have to be in that spot is something that I’m really proud of them for every time I see them play,” said Jamie, who played lacrosse for a while before finding her niche in music and musical theatre.

Jaclyn and Stephanie stood out in the stellar team effort that earned the Dragons (15-1) the No. 1 spot in the Nike/USA Lacrosse High School Girls National Top 25. Jaclyn had 14 points, including eight goals, and Stephanie allowed just one second-half goal in last week’s 20-7 win over previous No. 1 and defending IAAM A Conference champion St. Paul’s School for Girls.

“Since we were freshmen, we knew it was possible and just for it to happen now, it’s such an amazing feeling that our hard work has been paying off,” said Jaclyn, one of four players nationwide selected as a USA Lacrosse Player of the Week.

The Dragons are just five years removed from the B Conference where they won titles in 2015 and 2016. Although the Marszals are quick to give credit to coaches and players past and present, the sisters have obviously been a big part of the program’s meteoric rise to the top.

“And we are not done yet. We have bigger goals,” added Jaclyn with her sisters quick to echo that sentiment.

For the first time in program history the Dragons are the No. 1 seed for the IAAM A Conference championship and will host ninth-seeded Garrison Forest in the quarterfinals Friday at 4:15 p.m.

As they aim to continue a 12-game win streak and win the Dragons’ first A Conference championship, Jaclyn has 47 goals and 52 assists while Stephanie has a 52.6 percent save rate.

They bring a lot of energy to games and practices, Dragons coach Paige Walton said and even though they play at opposite ends of the field, Jaclyn and Stephanie still feed off each other.

“They’re both very focused players and very driven players. They want to do well,” Walton said.

“I think that their work ethic is similar. Jaclyn at times goes to practice early or stays after and I can say the same thing for Steph. If Jaclyn’s not shooting on Steph, it’s someone shooting on Steph while Jaclyn’s doing something else. And they’re competitive. They set the bar very high for themselves and they work hard to meet that bar.”

All three sisters started playing lacrosse at 5. Jaclyn always loved it. Jamie opted to stop playing after five years. Stephanie had her moments of doubt too until she stepped into the goal where her father, Jay Marszal, played at Mount St. Joseph and CCBC-Essex and still plays club lacrosse.

“You could see it with Jaclyn first,” Jay Marszal said. “She kind of stood out when they first started playing. Stephanie stood out the first time she got in the goal, first grade maybe, and you could see she had an instinct on how to do that. She wasn’t afraid of the ball. She had no fear… She’s very level headed. She doesn’t get too high. She doesn’t get too low. She’s kind of built for that position.”

Being at opposite ends of the field, Jaclyn and Stephanie face each other in practice and sometimes in the backyard of their Catonsville home where their competitive sides emerge.

“We were just talking about shooting outside and working on certain stuff and how it always gets competitive and ends with one of us yelling,” Stephanie said with a laugh.

Jaclyn said they sometimes play to the best of 11 shots.

“I remember if she would beat me I would just, like, scream,” Jaclyn said. “I was so mad, but it’s all in good fun. It’s always fun and I try to take it light-heartedly.”

Dragons teammate Neve O’Ferrall, who has known the Marszals since kindergarten, said that sibling competition only makes them better players.

“They really push each other to work harder to beat the other one whether it’s Jaclyn shooting on Stephanie or even in school like on tests,” O’Ferrall said. “I think that’s definitely a good thing. They’re some of the smartest people I know because of how competitive they are, but they’re also so supportive of each other. They really are best friends.”

Walton said there are similarities in the way they play, but Jaclyn and Stephanie “are their own people.” The triplets said others sometimes consider them one entity, but they don’t feel that way.

They each have their own separate interests aside from a joint investment in the Dragons lacrosse team. Jaclyn likes to paint. Stephanie curls up with a good book. Jamie posts her cover tunes on Instagram.

While Jaclyn and Stephanie also play soccer for the Dragons, Jamie has played golf and field hockey. Last fall, the hockey team didn’t have a goalie, so at the behest of one of her friends, she stepped in to fill the void even though she hadn’t played for years.

Jamie said she’s never felt left out because she doesn’t play lacrosse, but this year the oldest triplet made the sport a full-family affair once again by signing on as team manager. The team repaid her commitment by going to see her in the school production of The Music Man.

With their May 10th graduation and a summer vacation in the Outer Banks fast approaching, the Marszals are soaking in their final days together before separating for college.

Jaclyn will play lacrosse at Notre Dame and Stephanie will play at Delaware. Jamie is headed to Loyola Maryland and may pursue her interest in music and theatre. They’re all thinking about careers in scientific fields — Jamie in psychology or forensic science, Jaclyn in psychology and Stephanie as a physician’s assistant.

They’ve always gone to the same school and Jaclyn and Stephanie have always played for the same lacrosse team. All three said they’re excited, but still a little nervous about finding “our own sense of self,” Jaclyn said.

Nothing would polish off their high school years better than winning the IAAM A Conference championship, holding onto that No. 1 national ranking and celebrating together.

“Between Jaclyn and I, it’s been like that every day for as long as I can remember and this year having Jamie as our manager … now we all have the game, we all go to the game together, we all get to come home together, we all talk about it, so I think especially for this being our last year for all three of us ever being together, it’s been great having all of us here.”

Pictured above:Glenelg Country enters the IAAM A Conference playoffs as the top seed for the first time ever The Marszal triplets — Jaclyn (34), Jamie and Stephanie (23) — have enjoyed their senior season together on Glenelg Country School’s lacrosse team. Attacker Jaclyn and goalie Stephanie have helped the Dragons rise to No.1 in the nation as they prepare for Friday’s IAAM A Conference tournament quarterfinals. Jamie signed on as team manager to share this ride with her sisters before they head off to different colleges in the fall