Broadneck humbles Old Mill to improve to 6-0; may be the Bruins most “special group” ever (VIDEO HERE!) 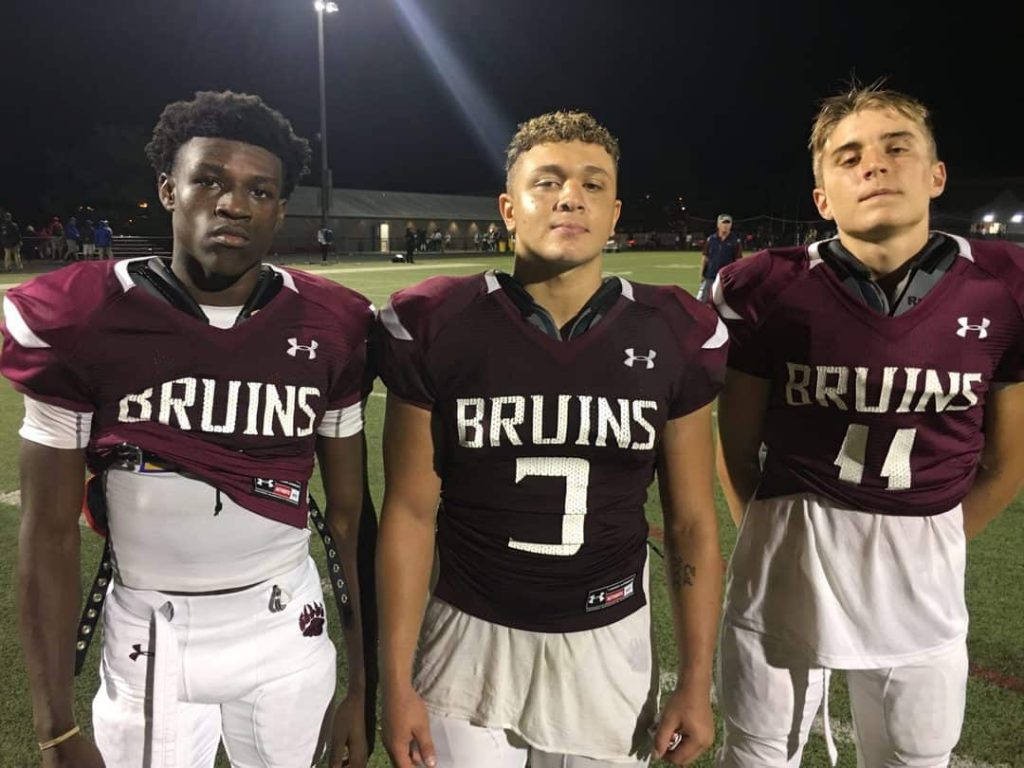 He hasn’t completed a pass left-handed yet, but he leads his league in TD throws and has guided his team to an undefeated season thus far in his the rookie season.

Yes, Broadneck’s freshman quarterback, Joshua Ehrlich, you could say, is the Pat Mahomes (the Kansas City Chiefs’ first-year starter who has his team off to a 4-0 start, with 14 touchdown passes, in his first year as an NFL starter) of Anne Arundel County high school football.

Ehrlich directed the third-ranked Bruins to a 35-0 rout of Old Mill, Friday night at Lawrence E. Knight Stadium in Cape St. Claire, to run the team’s record to a perfect 6-0. The phenom completed 19-of-28 passes for 197 yards and three touchdowns, lifting his season totals to 85-for-149 and 1,253 yards and 19 TD’s.

But Ehrlich did get picked off for the first time this season by Old Mill’s Myles Demby at the start of the second half while his counterpart, at the highest level, in Mahomes has yet to be intercepted.

“Yeah, it was my first, but I could have avoided it,” said Ehrlich, whose coach Rob Harris took the blame.

Harris said, “That was my fault.”

No. 18 Chesapeake-Anne Arundel, a 28-24 victor over South River Friday, is the only other Anne Arundel football team unbeaten at 6-0 (3-0 Anne Arundel) with Broadneck (5-0 Anne Arundel). The two teams do not play this season.

Old Mill (3-3, 3-2 Anne Arundel) is in serious danger of not making the 4A East playoffs for a second straight season after a run of 18 consecutive appearances. With four games left, including Chesapeake-Anne Arundel next week, the best the Patriots can finish is at 7-3 and that record with the playoff points they would accumulate may not be enough.

In dealing the Patriots the critical loss Friday, Ehrlich once again took advantage of all the weapons he has at his disposal, mainly his incredible record setting wide receiver Ethon Williams, who caught 10 balls for 95 yards and two touchdowns (20 and 9 yards). Williams, a Boston College commit, now has 43 receptions for 641 yards and 13 TD’s in the first six games.

Also, fellow receiver Andre Woods, Jr. and four-year varsity running back Jason Carcamo, sparkled in the victory offensively. On the other side of the pigskin, the Carlos Coates-led defense made huge contributions as well.

After Williams’ 20-yard TD grab from Ehrlich gave the Bruins their first score on their initial possession of the game, capping a six-play, 66-yard drive with Ehrlich completing four straight passes, Woods, Jr. dashed 72 yards to pay-dirt on their next play, with 4:29 left in the first quarter. Woods, Jr. took a pitch from Ehrlich while racing through the backfield from the right and streaking left down the sideline. Vince Facciponti’s second of what would be a 5-for-5 night booting extra points made it 14-zip.

“My teammates made it happen and I took advantage,” said Woods, Jr., an 11th grader.

With 51 seconds left on the clock in the first period, Ehrlich capped a nine-play, 45-yard drive with a 12-yard loft to Woods, Jr. for six more points (Woods’ 6th touchdown reception of the year) and Facciponti’s extra point made it 21-0.

That first period score has become a Bruins’ habit this season, as has the offense seeming to disappear in the next 12 minutes after the early splurge.

“I don’t know what is about that,” said coach Harris while savoring his 65th win (65-20) in his 8th season at the Bruins’ helm. “My 12-year old son asked me about our 21-0 starts and I really didn’t know how to answer what the problem is. But we will do something about it.”

Friday, the Bruins also followed their script and came out after intermission and the superb marching band halftime show, to get it going again. Despite throwing his first INT of the season on his first pass of the second half, Ehrlich then drove the Bruins 58 yards in 10 plays for another score on their next possession.

Williams hauled in a 9-yard slant pass from Ehrlich to make it 28-zip and with 1:26 left in the third quarter, Carcamo bolted and made one of his typical see-you-later cuts and scored from 38-yards out. Facciponti’s towering fifth extra-point made it 35-0 and employed the running clock.

While the Broadneck offense continued its weekly assault on opposing teams, averaging 39 points per game (234 total points in 6 games), senior linebacker Coates anchored their defense in posting their second shutout (the other was by 35-0 over North County) of the season. Coates was in on six tackles. He was a consistent resistor to the senior quarterback Markus Thompson-led Patriots’ offense.

Thompson was coming off a 47-27 rout of North County in which he threw five TD passes and ran for another. Coates and fellow linebackers Joshua Cain and Matt McAllister, both juniors, and D-linemen Luke DelRosari and John Bragaw kept the heat on Thompson. Under the persistent pressure, Thompson was able to complete just 14-of-32 pass attempts for 140 yards.

“Yes, it was my best game of the season and our defense and entire team plays together,” said Coates.

Broadneck had a huge edge in total offense with 421 yards to just 226 by the Patriots.

On the positive side for Old Mill, junior linebacker Tra Thomas had eight solo tackles while linemen Kobe Jones and Jordan Sessons each posted a sack of Ehrlich.

Broadneck will go after its 7th consecutive win at South River (3-3) on Friday as the Bruins continue their quest of a second straight undefeated regular season.

“I love these kids and team,” said Harris. “It’s a great group, a special group as good as we have ever had.” 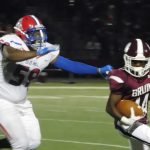 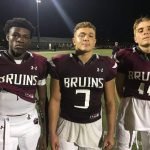