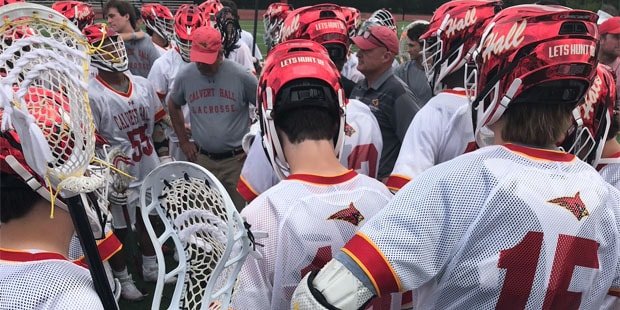 Top-ranked Calvert Hall blitzes No. 2 St. Paul’s with nine first quarter goals in another big win by the Cardinals

Calvert Hall lacrosse head coach Bryan Kelly may not agree, but his team is starting to make its dominating romp through the 2019 MIAA A Conference regular season look easy.

Fans on hand for Tuesday’s showdown with second-ranked St. Paul’s had barely settled into their seats when Calvert Hall freshman Truitt Sunderland circled around the back of the goal and zipped a high laser inside the left shoulder of St. Paul’s goalkeeper Jamie Grant to give the top-ranked Cardinals a 1-0 lead. 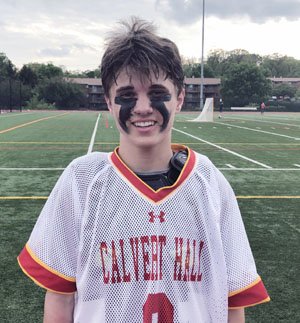 Less than two minutes later, Truitt assisted on a goal by senior Collin Stewart, and 26 seconds after that Truitt tallied his second unassisted goal for a 3-0 advantage. The Cardinals continued to pour it on in the first quarter, outscoring the Crusaders 9-0, before cruising to a 16-6 victory.

“Starting off fast really set the tone for us,” said Sunderland. “I know everyone was pumped up for this game, so getting off to a good start was huge and definitely killed some of their momentum.”

Junior Daniel Kelly scored four times for Calvert Hall, including three in the first quarter, and Sunderland finished with three goals and two assists. In addition, senior middies Jack Sawyer and Grant Mitchell each added two goals and one assist.

“It’s not easy,” said Coach Kelly, who is attempting to guide the Cardinals to their third consecutive MIAA A Conference crown, something that has not been accomplished since the MIAA was formed in 1995.

Kelly, however, did acknowledge that his team turned in an impressive performance.

“It was great,” he said. “Our face-off guys were the key to that. They did a great job of getting the ball out. I thought, offensively, our pace was good, we shared the ball and we recognized certain reads. Overall, it was a great effort.

“In the midfield, we run pretty much two offensive lines and we have a good group of D-middies we’re rolling in. The third line came in today and did a nice job for us and it was nice to see them get some good opportunities early. For us as a team, the guys do a great job of sharing the ball. No one cares who scores. They just want to go out and play, and play together.”

Seth Higgins finally put St. Paul’s on the scoreboard with an unassisted tally early in the second quarter, but Calvert Hall won the quarter 6-2 and went to the half with a 15-2 bulge. The Cardinals substituted liberally throughout the second half and drained the shot clock frequently as they scored just once after intermission. The Crusaders, to their credit, continued to battle and added four second half scores.

St. Paul’s head coach Trey Whitty indicated that his club was simply not ready to go in the opening quarter and paid the price for it.

“Credit to them, but we couldn’t have played a worse first quarter,” said Whitty. “They are a talented offense, obviously, but we created a lot of offense for them and that’s probably because they are so talented.”

According to Whitty, despite the humbling setback, his team still has a lot it can accomplish.

“I’m proud our guys stuck it out, after that first quarter,” said Whitty. “I’m proud that we kept fighting and battling and showed a little something at the end there. This isn’t the championship game. This isn’t the end of the road for us. So, there is some value in that second half we can take away.”

St. Paul’s (10-3 overall), which also has two league games to play is now 6-2 in the conference and in third place, a half game behind St. Mary’s (7-2), which holds the head-to-head tie-break over the Crusaders in the chase for the second seed and a first round playoff bye. St. Paul’s hosts Loyola on Friday and arch-rival Boys’ Latin next Tuesday. The Crusaders must win both and hope St. Mary’s stumbles in it’s league finale, next Tuesday at Mount St. Joseph.

With the victory Calvert Hall (13-1 overall) improved to 8-0 in the conference and clinched the top seed for the playoffs, with two regular season games to play. Sunderland set out the blueprint going forward for his team.

“The big thing is that we take it one game at a time and treat every opponent the same,” said Sunderland. “As long as we don’t overlook any opponents, we’ll be good.”

Pictured above: Calvert Hall coach Bryan Kelly speaks to his squad during a timeout late in the Cardinals’ 16-6 win over St. Paul’s.