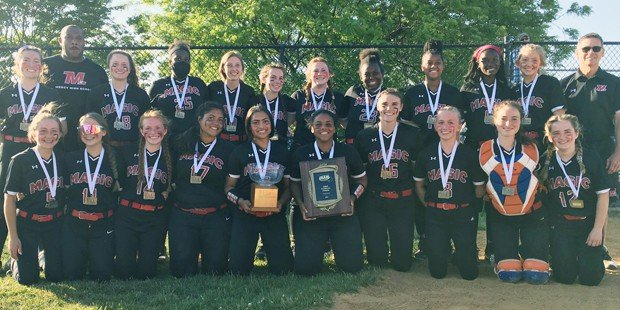 Mercy pitcher Gretchen Barstad may not have had her best stuff in the IAAM B Conference softball championship on Tuesday afternoon at the Bachman Sports Complex in Glen Burnie.

That hardly means the junior right-hander had a bad game, considering what she did with a bat in her hands while helping the Magic top St. Paul’s School for Girls, 9-8, to claim the program’s first-ever IAAM softball title.

All Barstad did was double to start a three-run first inning rally, blast an RBI triple in the second inning, crush a homer over the fence at Barry S. Shetrone Field in the fifth and single in the sixth to complete a cycle that was key to the winning cause.

Yet the top seeds still needed a lift from Maddie Kersch, who snapped a prolonged slump to deliver a ringing walk-off double to right-center in the bottom of the seventh inning to score Aryssa Reid and finally subdue the never-say-die Gators.

The junior said that she wasn’t sure that if she drove in Reid, who singled with one out, that the game was over.

“I was really trying not to be nervous,” she said. “My swing was getting too long so I tried to shorten it.”

Mercy coach Danico Harvey said that he was confident that Kersch would come through.

“I’ve been working with her to hit the ball up the middle,” he said.

Reid said that when she saw the ball go into the outfield, she was determined to score.

After Reid beat the throw to the plate, the Magic (12-1, 10-1 conference) mobbed Kersch as she stood on second base.

Harvey had high praise for Barstad.

Barstad also pitched a complete game, although the fourth-seeded Gators (6-5, 6-7) caused her a few problems during the contest.

That was especially true in the fourth inning when St. Paul’s scored five runs on just three hits to take a 6-4 lead, as Mercy committed three errors.

One run scored on a botched rundown, two on errors, one on sophomore Magean Gajewski’s single and another on a sacrifice fly by senior Dylan Delaney.

Mercy tied it in the fifth on Barstad’s homer and Reid’s RBI single only to watch the Gators jump back on top on freshman Abby Leitch’s single an inning later.

The Magic went to their short game to score twice in the sixth on sophomore Haley Lijewski’s bunt and a sophomore Olivia Clifton’s groundout to take an 8-7 advantage into the bottom of the seventh.

Then Kersch, who also knocked in a run in the first, ended the game in the seventh.