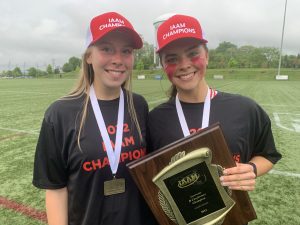 Jamie Collender and Savanah Safchuck were the driving forces for Mercy lacrosse Saturday. Collender finished with a game-high five goals and Safchuck added a hat trick as the 19th-ranked Magic claimed their fourth IAAM B title in five seasons with a 19-2 rout of Park at U.S. Lacrosse’s Tierney Field in Sparks.

Mercy’s girls lacrosse players held tight to the bitter memory of Park dashing their ambition for a perfect 2021 season with an overtime loss in the IAAM B Conference final.

Saturday afternoon, the No. 19 Magic avenged that loss and put the finishing touch on a perfect run through the B Conference with a 19-2 victory over the Bruins for their fourth championship in five seasons.

“We came back super hungry this year,” said Mercy senior Savannah Safchuck. “We worked hard. We played every game remembering what happened last year and we were thinking about this game the entire year and just getting back to having this trophy at our school.”

The Magic, who won the fifth IAAM lacrosse title in program history, went 10-0 against B Conference opponents this spring with an average margin of victory of 14.8 goals.

Just as they had last season, the Magic (14-4 overall) won both regular-season games handily over the Bruins (10-4), and Saturday at USA Lacrosse’s Tierney Field in Sparks, they never let the Bruins lead by more than 1-0.

The Magic answered that opening goal with eight straight as Laney Schmith capped the run on a feed from Bella Wojcik. Park’s Cassandra Kitchen, who scored both goals for the defending champs, cut the lead to 8-2 with a back-hand scoop at the 3:10 mark.

Safchuck then finished the half with two goals. She took a pass from Schmith on a diagonal cut and scored on a behind-the-back shot and then added an unassisted goal with 9.3 seconds left for a 10-2 halftime lead.

“We knew this was going to be a really, really tough battle especially after beating them last year,” said Park coach Robin Lowe. “They weren’t going to let down for a second and I think this team is more talented than last year’s team and give them credit.”

Nine Mercy players scored, led by Jamie Collender with five goals and Safchuck, Schmith and Sydney Miles with three each.

“Our entire team is an offensive weapon,” said Collender, a sophomore midfielder who also had three assists.

“One of our defenders (Talia Maria) scored today. They all can take the ball to goal. We had all of our offense on today. We clicked on the cuts, we clicked on the dodges, we found the seams to cut through and overall we just worked really well today and I think that’s what made a big difference.”

The Magic defensive unit of Maria, Hailey Jordan, Gracie Etham, Courtney Lesko and goalie Lila Stakowski held the Bruins without a goal for the final 28:10 of the game.

“We work a lot in practice on stack and they basically run what we play, just in a different form,” said Jordan, a senior. “The key was just to send it out of the stack today. We had to or else it was going to not end up the way we wanted it to.”

After the loss in the final last year, Mercy coach Brian Casserly beefed up his schedule adding A Conference teams Gerstell, Mount de Sales, Roland Park and John Carroll as well as Georgetown Visitation. The Magic lost to all of those except Gerstell. They also beat defending Class 1A state champion Liberty.

Casserly, who has just five seniors on this team, wanted to make the early part of the season tougher, “so that they have to work their butts off and be ready for adversity and understand what it’s like. We were okay with the possibility of losing some games early in the season so we could be good late. Once we got to conference play, I think they were really confident in themselves and just kind of got rolling.”

For Park, which has won a B Conference best six championships, there were just too many turnovers Saturday. They won half of the 22 draws, but with 20 turnovers, they didn’t have the possession time to match.

The Bruins had a chance to rebound in the second half, winning four of the first five draws, but they turned them all over without a shot and the Magic converted every time.

“Their pressure through the midfield really just got us,” said Lowe. “They’re fast, they’re talented and they were allowed to play really, really physical and that definitely took us out of our game. We typically are not a team that turns the ball over quite like we did today, but give them credit for causing a lot of them. We were tired, we made some poor choices a few times, but I would say turnovers were caused by them.”