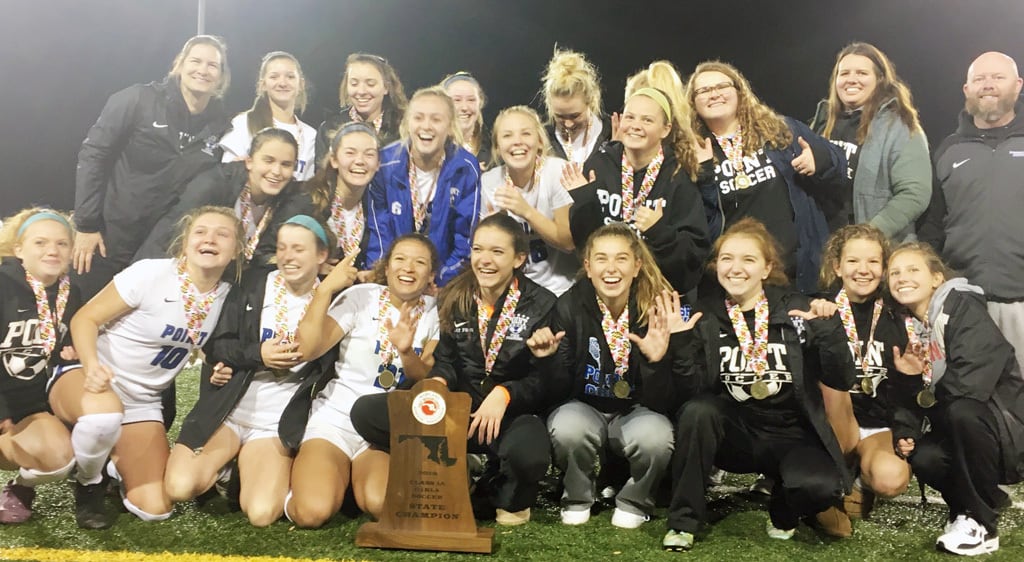 Whereas Smithsburg High traveled a harrowing road through the final three games of regional play and a state semifinal by winning three one-goal contests and prevailing in a shootout in the other, Sparrows Point’s girls soccer team had a relatively easy path to the Class 1A championship match on Saturday at Loyola University ’s Ridley Athletic Complex.

As it turned out, having experience in close games was only a marginal benefit to the Leopards from Washington County.

Yes, they made the tussle closer than expected, yet they were unable to dethrone the now six-time state champs, who found a way to claim a 4-2 victory behind senior Julie Lynch and eight of her classmates.

“We played them toe-to-toe and gave them all they could handle,” Smithsburg coach Bill Fowkes said.

To their credit, Smithsburg’s players were not there to just roll over. They even had the Pointers off their game for portions of the match.

No. 2 Sparrows Point (16-0 overall) struck first in the 14th minute when senior forward Jasmine Pinter nudged in a feed from senior midfielder Kalli Bell to give the five-time defending state champs a 1-0 advantage that only lasted until junior forward Bailey Grove answered for the Leopards (10-5-5) 75 seconds later.

It took the Baltimore County champs just 61 seconds to break the short-lived deadlock when senior midfielder and two-time VSN Player of the Year Lynch connected on a well-placed free kick just outside the 18 to give her team a 2-1 cushion. It was the West Virginia University recruit’s 16th goal of the season to complement her team-high dozen assists.

The Leopards drew even again less than four minutes into the second half when junior keeper Jaddah Foos inadvertently fouled a Smithsburg player in the box, yielding a penalty kick to leading scorer Kara Poole for an effortless equalizer.

“We felt that we had a lot of momentum,” confided Grove. “We’ve really improved in the postseason on coming back after we’re down.”

“Once they tied it (in the second half), that was a wakeup call for us,” Lynch said. “We knew we needed to take advantage of every chance we got. We started to yell at each other and then we started yelling at the refs.”

It was with that mindset that Sparrows Point, ever confident in its own right, was able to jump back in front with just under 11 minutes left in regulation when senior midfielder Sammie Bennett was taken down in the box and Lynch finished the ensuing PK, nailing the shot just under the crossbar to put the Pointers ahead, 3-2.

“I’ve only missed one PK in my life, so I thought I’d make it,” Lynch said. “But you never know. You could miss or hit the post.”

Sparrows Point coach Lori Sexton said that she had no doubts about her team taking the lead at that point.

And once the Pointers had the lead, they weren’t about to give it up for a third time.

“Wow,” Sexton said. “We had high hopes and anticipated winning county and state (titles) and going unbeaten, but to do it is amazing.”

And for those who may be critical of the Pointers’ schedule and look down on a 1A title, think again because they beat newly minted Class 4A champs Perry Hall — twice this season.

“What I’m finding is that it’s a lot harder to stay on top than it is to get there,” Sexton added. “Each year it’s a batch of new kids, so it’s awesome to win again. It’s just been such an honor to work with them and have been given this opportunity.”