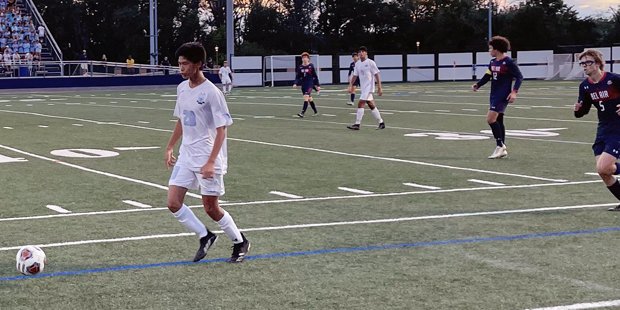 Sophomore has a goal and an assist for the Mustangs

by Gary Adornato
On an absolutely perfect night for high school soccer, No. 6 C. Milton Wright got one goal in each half and kept a clean sheet on the defensive end to take a 2-0 UCBAC Chesapeake Division boys soccer match against rival Bel Air, Monday in Bel Air.
Both teams came out with plenty of energy and the Bobcats got an early free kick, just outside the box which senior captain JT Moran put on goal for a quick opportunity. CMW probed with long runs from the outside and nearly had an early goal as well when senior Adrian Gonzalez received a corner from Conor Lesniewski and headed it on frame only to see it saved by Bel Air’s Ethan Crosby.
Much of the first 10 minutes was played in the middle of the field, but sophomore Matt Luk broke the ice for C. Milton Wright when slammed back a rebound to put the Mustangs on top, 1-0, with just over 29 minutes remaining in the first half.
As the first half moved on, the ball settled largely into the Bel Air defensive end of the field, as CMW amped up the pressure. The Bobcats were able to withstand the push and made it to intermission trailing by just one goal.
The second half was more of the same and C. Milton Wright eventually broke through for s second goal with Luk feeding Lesniewski.
Both goalkeepers played well, with Crosby stopping seven shots and CMW’s Jake Adams coming up with five saves.
C. Milton Wright (5-1 overall) improved to 2-0 in the UCBAC Chesapeake Division. Bel Air (4-3 overall) saw its league record evened at 1-1.
Pictured above: C. Milton Wright’s Matt Luk had a goal and an assist in his team’s 2-0 win over Bel Air.
NO. 6 C. MILTON WRIGHT 2, BEL AIR O
CMW 1 1 — 2
BA 0 0 — 0
GOALS: CMW-Matt Luk, Connor Lesniewski.
ASSIST: CMW-Luk.
SAVES: CMW-Jake Adams 5; BA-Ethan Crosby 7.