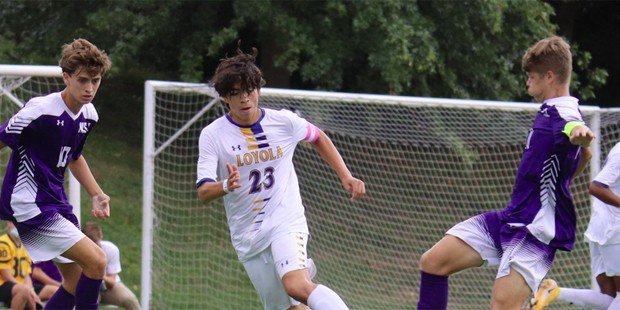 The Loyola Blakefield soccer team is over .500 for the first time this season as the No. 9 Dons stretched their unbeaten streak to five games, Wednesday, going on the road and defeating Mount St. Joseph, 1-0.

Jackson Graham scored the game’s only goal with an assist from Cam Cole to help the Dons improve to 4-3-3 in the MIAA A Conference where they are tied with Gilman for third place with 15 points each.

St. Joe fell to 1-6-1 as it suffered its second consecutive 1-0 setback and its fourth one goal loss of the season.

Top-ranked Calvert Hall erupted for four goals early in the second half and emptied is bench in a 6-0 win over Archbishop Spalding.

The Cardinals (8-0-1) have 25 points and are in the drivers’ season in the race for the top seed for the playoffs, as they head into their final game of the first half of the season. They will play at No. 19 Archbishop Curley in the annual Reif Cup showdown between the two rivals.

No. 2 McDonogh solved the tough defensive unit of No. 8 Gilman for three goals and snapped the Greyhounds three game winning streak with a 3-1 home victory Wednesday in Owings Mills.

Jacob Murrell, the Eagles’ leading scorer, had one goal and one assist in the win. Bryant Mayer and Usman Adegbenro also added one goal each for McDonogh (8-2, 7-2). Seth Malek and Kobe Keomany also had assists.

No. 19 Archbishop Curley, which had been struggling to establish a go-to goal scorer, may have found one in junior Brady Geho, who scored four times, Wednesday, in the Friars’ 5-2 MIAA Conference victory over Boys’ Latin.

Andrew Throneburgh also had a big game, scoring goal and adding two assists. In addition, Alex Krisher dished out a pair of assists and Aidan Diem had one.

Curley is now 4-4 in the league and currently in sixth place, but within three points of third place.