Loyola turns close battle with Gilman into second half rout 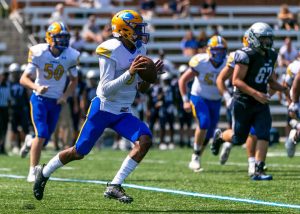 Loyola quarterback Jordan Moore, looking downfield, did it with his right arm and both legs Saturday in the Dons’ season opener. The junior ran for three touchdowns and threw for another in Loyola’s 56-0 victory over Gilman in Roland Park. (photo – Sports Majors)

Like King Midas, just about everything Bach’s Greyhounds touched turned to gold in the season lid-lifter.

Just a week later, however, it was Loyola Blakefield’s turn to find some magic at the same site by exploding in the second half, Saturday afternoon, to overwhelm Gilman, 56-0.

Although the Dons played a solid game in the first half while building a 13-0 advantage on touchdown runs of 34 yards and 2 yards by junior quarterback Jordan Moore, they really found a groove in the second half to run away with the non-conference MIAA tussle.

“We were a little sluggish in the first half,” Moore said. “Coach told us we needed to pick it up in the second half. This sets the tone for our season.”

Moore ignited the onslaught by completing a screen pass to sophomore Micah Robinson, who turned the short toss into a 60-yard touchdown for a 20-0 lead midway through the third quarter.

“Once it got to 20-0, the floodgates kind of opened for us,” Loyola coach Anthony Zehyoue said. “They had a couple of injuries, and we took advantage.”

The most notable injury, among many for Gilman, was to top running back Ke’Yon Torain, who scored four times against Riverdale Baptist.

Yet the Greyhounds’ biggest problem was how well the Dons’ special teams performed.

Freshman running back/linebacker Kyle Powell really got the Dons rolling after he blocked a punt and rumbled 18 yards for a scoop-and-score to build the Dons’ cushion to 27-0 with just over four minutes remaining in the period.

Just 14 seconds later, Loyola senior running back/defensive lineman Thomas Bethune recovered a loose ball on the ensuing kickoff at the Gilman 2-yard line, the spot from which senior running back Kaire Umoja barreled in to pad the lead to 34-0.

Senior defensive lineman Phillip Florenzo blocked a punt and fell on the ball in the end zone to boost the gap to 41-0 and start a running clock with just over two minutes remaining in the quarter.

Moore capped a three-play, 69-yard sequence with a 54-yard TD run to up the score to 49-0 before junior wideout Joshua Buck tallied on a 22-yard jet sweep after an interception by junior defensive back Blake Johnson gave Loyola possession at the Greyhounds’ 24 with the clock winding down in the fourth quarter.

“You saw how the depth came into play today,” Bach said. “We had some injuries today, so we had some guys learning on the run. We had a lot of guys in unfamiliar positions. We tried to mix and match. Sometimes the wheels come off like that. But we’re just going to regroup and stay positive.”

Moore said that he was unaware of Gilman’s success the prior week.

“I didn’t know what they did against Riverdale Baptist,” he said. “I wasn’t worried about them. I just had confidence in my teammates, and it starts with the line.”

Zehyoue said that he was proud of his defensive line, which was spearheaded by senior Cian Callahan and Buck.

“They’re a little undersized in there,” he said. “But they really got after it today.”

The Dons will be looking to make it two straight when they host Georgetown Prep next Friday at Hargaden Field in Towson while the Greyhounds try to get back on track when they travel to Episcopal (Va.) the following afternoon.