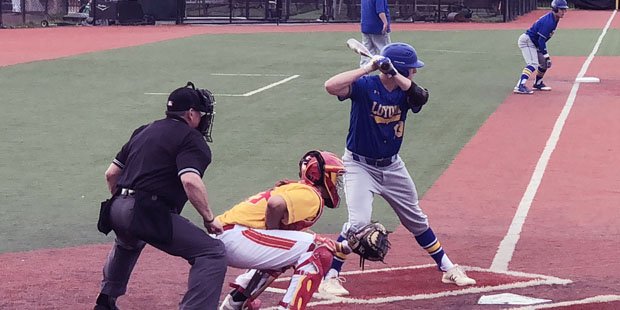 Loyola Blakefield had base-runners all over Calvert Hall’s Carlo Crispino Stadium, Tuesday afternoon in Towson, and the Dons cashed in just enough of them to withstand a late surge by the host Cardinals and pickup a critical, 10-8, MIAA A Conference baseball victory.

(From Left) Jeff Snider, Dom Dinoto and Emmett Reynolds, the first three hitters in the Loyola lineup were a combined 7-for-10 with six RBI’s and six runs scored.

The first three hitters in the Loyola line-up — shortstop Dom Dinoto, third-baseman Jeff Snider and catcher Emmett Reynolds — were a combined 7-for-10 with six RBI’s and six runs scored, and the trio reached base 11 times to lead the Dons (9-7 overall, 9-5).

The marathon, three-hour win keeps alive Loyola’s hopes of climbing up to the No. 2 seed in the A Conference where they currently sit in fourth-place in a closely packed field.

Reynolds led the attack on four Cardinal pitchers, with a double and a triple and four RBI’s. Dinoto had three hits, an RBI and two runs scored, while Snider had two hits, an RBI, and he scored three times.

The Dons overcame a 3-1 Hall lead when they tallied four times in the second inning, chasing Calvert Hall starter Brady Power, who took the loss, from the mound. Reynolds keyed the rally with a two-run triple off of reliever Grant Duemmel.

Blakefield increased its lead to 9-4 with a four-run fourth, when Mason Burke had a two-run single. Burke had two hits on the day for coach Mike Kelly. They added an insurance run in the fifth when Reynolds drove in a run with a sac-fly.

Calvert Hall (18-6 overall), which remains on track to earn the top seed with a 13-2 league record, battled back with a run in the fifth when Garrett McIlhenney drew a bases loaded walk off of Loyola starter Max Glagola. At that point Kelly summoned his ace, Matt Wyatt to face the Hall’s Jose Torres with the bases loaded. Torres grounded to first to end the threat.

The Hall scored again in the sixth when Parker Landwehr smashed a solo home run off of Wyatt, and Cards had the potential winning run at the plate in the bottom of the seventh.

Torres cut the Loyola lead to 10-8 with a two-run single off of Wyatt in the seventh, and after Wyatt walked Landwehr with two away, clean-up hitter Antonio Barranca, who had already driven in two runs on the day for Coach Lou Eckerl, came to the plate as the potential winning run.

Wyatt got Barranca with a 94 mph fastball to end the threat and the game.

“It was a typical Loyola-Calvert Hall dogfight,” said Kelly. “That’s what that was for sure. Both teams had their ups and downs.”

Kelly said he had hoped not to use Wyatt in this contest.

“We didn’t plan on throwing Matt (Wyatt) today, but once we got that lead, it was a no-brainer to use him for two innings,” said Kelly. “He was good enough to get the job done. That last pitch seemed like it was close to a hundred miles an hour.”

“Emmett is hitting around .500. He is following his brother Connor’s footsteps.”

Connor Reynolds hit .444 in his senior year at Blakefield, and he went on to become the 2017 Centennial Conference Player of the Year last season, playing for coach Bobby Babb at Johns Hopkkns, where he capped off a sterling four-year career by being named 2nd-Team D-3 All-America for the Blue Jays.