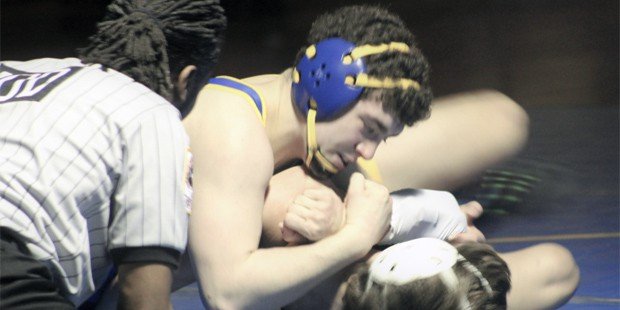 On any given day of the wrestling season, any of these meetings would be must-see matches. On Saturday morning at Loyola, wrestling fans were treated to a dream tri-meet with the hosts welcoming two fellow top ten teams in the state’s rankings, No. 9 Dunbar and No. 10 South Carroll. The Dons are the No. 6 team in those rankings.

Surprisingly, the matches turned out to be fairly one-sided as Loyola’s 41-23 win over South Carroll did not feel as close as the score indicated and the Dons’ 54-25 win over Dunbar was as easy and drama free as the final tally implies.

In all fairness, Dunbar came into the action missing some key starters due to the flu. Unfortunately for them, the other squads were mostly intact with Loyola finally fielding its optimal line-up and the results showing it.

“I felt going in that if we wrestled our style and were able to get bonus points where we had an advantage, we would have a good chance to win,” Loyola coach Steve Truitt said. “I was pleasantly surprised by how the matches turned out. For the most part, our guys wrestled hard, aggressive, and they executed when they needed to.

“Both South Carroll and Dunbar are well coached, have lots of talent, so it was a good day to be a Don. We have two more duals left in the regular season (rival Calvert Hall on Wednesday and then John Carroll on Friday), so we have to take care of business in those matches and then begin to focus on wrestling our best at the end of season tournaments.”

After the referee’s whistle the sound heard most throughout the gym was the bell ringing from behind the Loyola bench after every fall. A sound that came in all six of the Dons’ contested wins with Dunbar and five more times in the South Carroll match. Only two of Loyola’s victories that were earned on the mat went the distance on this day (forfeits aside).

Highlights from the Dons’ battle with South Carroll include Jeremiah Aybar (No.15) watching Antonio Bradford (No. 8 at 170) take a 5-0 lead into the second half of the match, only to let up his intensity enough to open the door for Aybar to shock him with a third period fall, 4:37. No. 11 Matty Walsh beat No. 16 Gage Owen, 2-1, at 120.

“I was really happy to see Jeremiah Aybar get a big pin against a very tough and highly ranked Antonio Bradford from South Carroll,” Truitt added. “Our coaching staff always does a pre-match meeting where we talk about matchups and what lineup we want as a team to give us the best chance to win and we wanted James Conway on Bradford. But they bumped him up onto Jeremiah and he got us a huge pin that kept the momentum on our side. I’ve never seen him so fired up and that match was key to giving us the momentum we needed to get the team win.”

The biggest shocker of the day for Loyola came in the Dunbar match. State runner-up De’Airus Carr (No. 8 at 152) moved up to 160 to face the Dons’ stellar freshman, Damon Nelson (No. 13). Carr was dominating the action when Nelson chose top to start the second frame.

Nelson immediately jumped out to a front headlock and hit a gator roll on Carr to no avail. Without hesitation, Nelson hit it again, and this time hit pay dirt, sticking the Poet 22 seconds into the second period.

“I was also excited for Damon Nelson,” continued Truitt. “He’s just a freshman but he definitely doesn’t wrestle like it. For him to go out there and get a fall against someone as strong and talented as Dunbar’s De’Airus Carr, was really impressive. As he gets stronger and grows into his lanky frame, he will be a scary matchup for years to come.”

Nelson pinned South Carroll’s Austin Gidge, 3:22 in his other match. Walsh picked up a fall over Dunbar’s Joseph Gary, 1:08, and Jeremiah Aybar received a forfeit versus the Poets.

“(We were) very pleased to travel on a Saturday morning and beat a top 10 ranked team by almost 30 points with a 9-5 match split,” South Carroll coach Matt Thomas said. “Our 132 Jake Rippeon wrestled a very impressive match against (Camerin) Deville. It was a three-point decision but came down to the last 20-30 seconds. (I’m) hopeful he gets another chance to battle to him. I believe that’s another match we could swing against them with a few adjustments.

“We knew coming into the second match Loyola is a top six team in the entire state and we’d have our hands full, but the guys just had to go out and wrestle. We didn’t win the coin flip which hurt us in certain matchups we were going for. But that’s not an excuse the guys still had to go out and win some swing matches.”

“Rippeon went out and wrestled a great match against ranked Owen Dixon to start us off in the win column,” said Thomas. “Moose went out and beat Cole Meyers where he dominated the entire match and collected us another three points for the team.
“Then we knew going up top they are very solid. We ran Bradford to 182 against Aybar who’s a solid kid which we were winning 5-0 early and made a bonehead mistake. Very disappointed in that outcome of that match. (Justin) Brister at 195 got us a major decision to get us back on the board. Two-twenty and heavyweight were coin flips that didn’t go our way. Those three losses up top made a 20-25 point swing in team scores.”

Moose and Pizzuto added falls against Dunbar. Joining them in going unblemished on the day were No. 6 Ryan Athey (113) and No. 7 AJ Rodrigues (126).

“It (the loss to Loyola) leaves a bitter taste in your mouth when you’re having such a successful season but hats off to both coaches and teams,” Thomas offered. “Our goal this year was to chase competition and that’s what we’re going to continue to do. It was a tri with three top ten teams in the state. Now, we make adjustments and work to win out and finish the season 13-1 and host Regional duals. Good luck the rest of the season to Loyola & Dunbar.”

Dunbar’s day was not without triumphs of its own, against South Carroll, No. 6 Camerin Deville beat Rippeon, 10-7. In the Loyola bout, Deville downed Dixon, 7-2. No. 7 Nyck Simpson continued his undefeated campaign picking up a 15-5 major-decision versus James Conway (No. 11 at 170) and a :45 second flattening of South Carroll’s Andrew Dupree.

“Murphy’s law is real,” joked Dunbar coach Doug McClain. “Eight guys with the flu couldn’t have happened at a worse time. But I’ve been coaching long enough to know to take the good with the bad, saddle the troops, and press forward. The guys we brought did well. Considering the fact, we have not had the same combination of guys in the starting line up all year says something about the character of the team. We’ll be back to full strength soon enough.”

After the dust settled Truitt felt good about where his team is.

“We’ve wrestled a very competitive and challenging schedule this year and I feel like our guys should be ready for the postseason. The MIAA, MIS, and National Prep Tournaments are probably the most talent rich events in the state of Maryland, so we will need to be wrestling well if want to have some guys on top of the podium.”

Pictured above: Loyola’s Josh Aybar completes one of this two pins during the Dons sweep of a tri-meet with South Carroll and Dunbar.