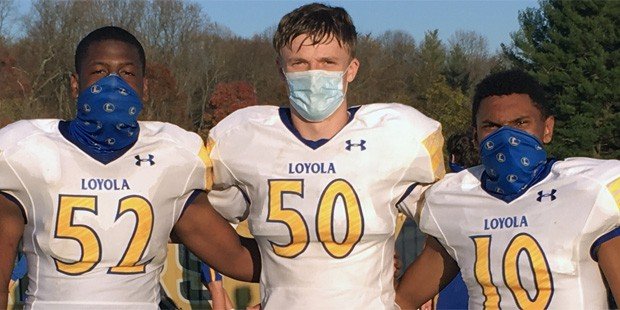 Following a scrimmage against Archbishop Curley last week, the Loyola Blakefield football team had a few issues to iron out in its season opener against St. Paul’s School for Boys under bright and sunny skies on Saturday afternoon in Brooklandville.

The Dons did more than that in steamrolling the Crusaders at Mitch Tullai Field at George Mitchell Stadium, bolting to a 42-0 halftime advantage on the way to a 62-0 triumph.

Among the many things that went well for Loyola was the debut of freshman quarterback/receiver Jayden Moore, whose older brother, senior quarterback Jordan Moore, tossed a 49-yard touchdown pass to his younger sibling. The rookie also threw a touchdown pass of his own in a scintillating first varsity encounter.

Jordan Moore, headed to Duke University next fall, threw for two other TD’s — to junior wideout Noah Bull and sophomore wideout Shane Elliot — and ran for another on a brilliant 55-yard scamper.

All in all, it was a banner day for the Dons in almost every regard.

“Last week the offense was a little confused against Curley,” said junior linebacker Anto Saka. “But today they were running on all cylinders.”

An early fumble by the Crusaders gave Loyola good field position and the Dons capitalized on Jordan Moore’s 13-yard strike to Bull before Micah Robinson’s 46-yard ramble gave the visitors a 13-0 advantage with just 36 seconds left in the opening period.

After St. Paul’s stayed close for most of the second quarter, the roof began to fall in on the Crusaders when Loyola scored on a safety and then Robinson streaked 85 yards for another score on the ensuing kickoff for a 22-0 margin with just over four minutes remaining in the half.

The snowball effect continued when Jordan Moore found Elliot for another score and sophomore linebacker Andrew Duvall pounced on a fumble in the end zone just over two minutes later to widen the gap to 35-0.

Little brother Jayden Moore then began to assert himself when he caught a 49-yard spiral from his brother with 59 seconds to go before the intermission for a 42-0 halftime gap.

Jordan Moore’s TD run started a running clock early in the third quarter, which still gave the Dons enough time to add to their totals — including Jayden Moore’s 46-yard bomb to sophomore wideout Marcus Hines and a 5-yard TD run by senior running back Joshua Buck after a long fumble recovery and run by sophomore linebacker Barrett Jorgensen.

Naturally, Jayden Moore was happy with his accomplishments in his initial varsity encounter.

“It was really exciting to do this in my first varsity game, and to follow in my brothers’ footsteps,” he said.

On his TD pass, the younger Moore said that he felt the hit by a St. Paul’s lineman as he released the ball.

“I didn’t see what happened, but I heard everybody yelling,” he added.

Junior offensive lineman Billy Dwan said that he was just happy that the team is able to play this season.

“We don’t know how many more of these games we’re going to get,” he said, referring to the effect of the coronavirus on all sports.

“The good news is that it was easy to talk about what we needed to focus on.” he said.

And a good deal of that focus was placed on St. Paul’s senior wideout Kyle Austin, who Zehyoue said was the Crusaders’ most dangerous weapon for senior quarterback Scott Smith.

“He was our No. 1 focus,” Zehyoue said. “We didn’t double team him, but we accounted for him at all times.”

“But I liked the effort I saw from our guys,” he said. “I even saw the same effort when it was over — when they had a running clock. The early fumble didn’t help us. We know we have a lot to work on.”

St. Paul’s will test Gilman next week, the second of just three games on the Crusaders’ schedule this fall.

Loyola will meet Archbishop Spalding next Saturday, with four more games — including the 101st Turkey Bowl against arch-rival Calvert Hall — to follow.