Loyola locks up a second seed for MIAA A playoffs

Calvert Hall still has work to do to qualify for the post-season; MIAA A Conference soccer playoff seeds explained here 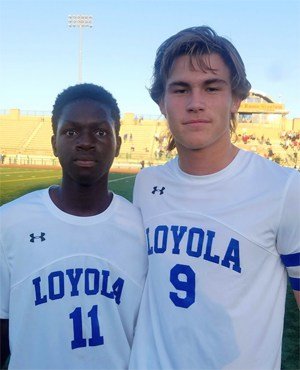 No. 4 Loyola Blakefield got a hard earned, 2-0, MIAA A Conference soccer victory at No. 5 Calvert Hall on Monday afternoon to clinch the second seed in the Black Division and a home game in the quarterfinal round of the league playoffs, which commence on October 29.

Loyola Senior Chase Llewellyn curved a perfect direct kick from the 18 around the Calvert Hall wall into the back post with 27:09 left in regulation to break a scoreless tie, and junior Kwaku Marfo-Sarbeng added an insurance goal with three and a half minutes to go in the game to secure the win.

Freshman Jordy Eckman (8 saves) notched the shutout, his third of the season.

Eckman gave the credit to the Dons defenders.

“Our back line keeps me in every game,” said Eckman. “It’s great to get this win, which gives us a home game in the playoffs.”

Llewellyn, who will attend Georgetown University next fall for lacrosse, has been the leader of the Loyola offense all year.

“We got a foul at the top of the box, and when their wall lined up on the left side their goalie started creeping to that side, and the back post was open,” said Llewellyn. “So, I hit it there. This was a hard fought game throughout. Calvert Hall always fights hard.”

Marfo-Sarbeng gave the credit for his goal to Julian Schmugge.

“Schmugge made a great run, (Ryan) Kelly headed to him, and no one was marking me,” said Marfo-Sarbeng. “I made a hard sprint down the middle of the field with no one on me, and I finished it.

“Jordy kept making big saves and he had a lot of help from Kelly, James Urgarte, Dom Parravano and my brother Kojo (Marfo-Sarbeng) on defense.”

“We just didn’t make any plays today, and at this time of the year it’s all about making plays,” said Zinkand. “We need to clean up a few things heading into the playoffs.” 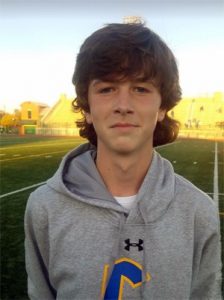 Loyola will close its regular season on Friday at Boys’ Latin and then will host the third seed from the Red Division on Tuesday, Oct. 29. Currently, Gilman (5-7) holds a six point on Archbishop Spalding (3-8) in the chase for the third seed in the Red Division. Spalding visits Gilman on Wednesday and the host Greyhounds will go to the post-season with a win or a tie in their regular season finale. Should the Cavaliers win, however, and then upset second-place Mount St. Joseph on Friday, the Cavs would own the tie-breaker and advance as the Red Division’s third seed.

Calvert Hall (7-6-1, 6-5-1) has 19 points and can clinch the third and final playoff spot in the Black Division with a win or tie in its regular season finale against John Carroll, on Wednesday. Should the Cardinals fall in that match, they will have to await the outcome of John Carroll’s final match, Friday at home against No. 1 Archbishop Curley. A win over Calvert Hall and Curley would vault the Patriots (5-6) into the playoffs as the third seed in the Black Division.

Mount St. Joseph (7-3-1) will be the second seed in the Red Division and will host either Calvert Hall or John Carroll in the quarterfinal round on Oct. 29.

The MIAA A Conference Championship game will be played at Essex Community College on Sunday, Nov. 3rd (5:30 p.m.).