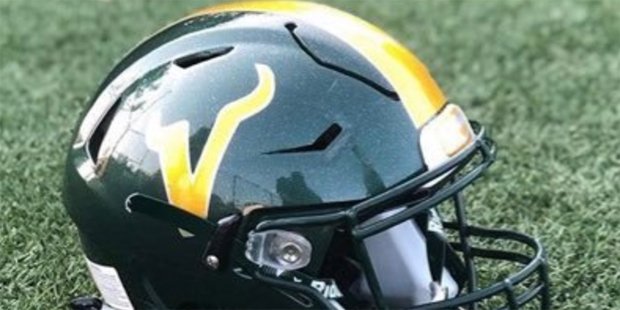 The Annapolis Area Christian football team opened its 2021 season on the road, Thursday, on a gorgeous afternoon in Purcellville, Virginia, as the Eagles lined up against the Loudoun Valley Vikings.
The weather may have been the best thing about this afternoon for AACS, as poor field position and mistakes contributed to a 38-6 drubbing by Loudoun Valley.
Things went south early as a punt from the AACS end zone led to a long return in Eagle territory which gave Loudoun Valley a first down at the Annapolis Area 12, midway through the first quarter. After an encroachment call against AACS, Blake Moore rushed for a 6-yard touchdown on first down and the Vikings took a 7-0 lead.
The Eagles went three and out on their next possession and, after a long run by Moore was nullified by a holding call, Loudoun Valley senior quarterback Logan Small delivered a deep ball to Julian Randolph who caught it in stride and rolled into the end zone for a 51-yard touchdown reception, and a 14-0 lead.
AACS started its next possession on its own 32, but penalties and lost yardage pushed the Eagles back inside their five before punting again from their own end zone. The return once again provided the host Vikings with outstanding field possession at the AACS 24, with 1:38 left in the opening quarter.
The Eagles defense provided a bright spot as they pushed Loudoun Valley back to the 40 and forced a punt. AACS, however, remained stuck in poor field possession as the ensuing kick pinned them at their own 10, early in the second quarter. Another quick punt was once again returned to the Eagle 24 by Loudoun Valley and it eventually came away with a 17-yard field goal by Henry McClellan.
First half disaster continued to reign down on the Eagles as they fumbled the ball back to the Vikings, with 7:02 left in the second quarter. Four plays later, Moore scored on a two-yard run for his second touchdown of the afternoon.
Eagle junior quarterback Xavier Essex provided a spark for his squad when he hit Carius McClain for a first down in Loudoun Valley territory and then completed a long pass down to the Viking 12. Unfortunately, a penalty and a couple of big losses, one which knocked Essex from the game, pushed the Eagles back to their 29. They then turned the ball over downs after an errant snap that cost them another four yards on fourth down.
Things improved for the Eagles in the third quarter.
On its first possession of the third quarter, AACS produced its biggest offensive play of the day when backup quarterback Trevor Gray scrambled out of trouble, on a fourth down play at his own 32, and completed a 48-yard pass to junior Joshua Hardy at the Loudon Valley 20. Grey then connected with Warren Burris down to the Viking five and then on a 5-yard TD toss to Hardy to put the Eagles on the board.
Loudoun Valley responded early in the fourth quarter as it completed a long drive with Moore’s third touchdown of the day, a 3-yard run, as the Vikings took a 31-6 lead. The Vikings capped their big day with a 14-yard touchdown run by Isiah Stokes, later in the quarter.
LOUDON VALLEY 38, ANNAPOLIS AREA CHRISTIAN 6
AACS 0 0 6 0 — 6
LOUD 14 10 0 14 — 38
1STQ
LOUD – Blake Moore 6 run (Henry McClellan kick)
LOUD – Julian Randolph 51 pass from Logan Small (McClellan kick)
2NDQ
LOUD – McClellan 17 FG
LOUD – Moore 2 run (McClellan kick)
3RDQ
AACS – Joshua Hardy 5 pass from Trevor Gray (pass failed)
4THQ
LOUD – Moore 3 run (McClellan kick)
LOUD – Isiah Stokes 14 run (McClellan kick)