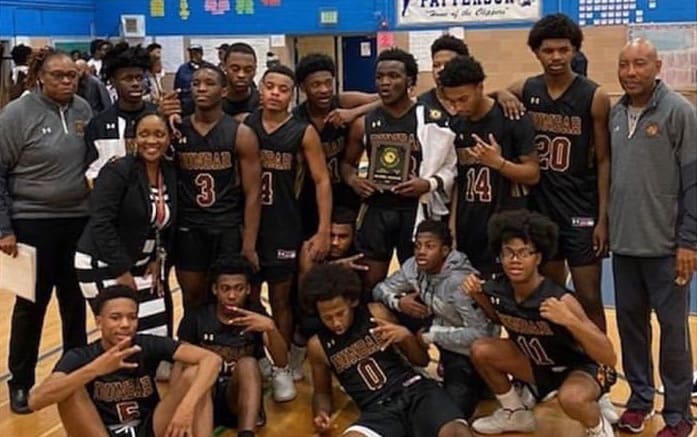 It hasn’t been the best of the seasons for Dunbar High boys basketball. Despite recent off the court controversies, the Poets have found their way to another championship.

Bert’s 3-pointer with a minute left in regulation, broke a 58-58 tie for the Poets, who held on for their 20th region title and a spot in the state 2A Elite Eight. The East Baltimore school will travel to Wicomico Saturday afternoon for a spot in next week’s state Final Four at the University of Maryland.

Less than a month ago, the school parted ways with alum and former Terp star Keith Booth, who was hired as Poets coach last May. Booth’s sudden departure and speculation of internal dysfunction at the Orleans Street school has engulfed the iconic basketball program.

The Poet players have turn the negative vibes into positives.

“They have been a team since all the drama began, and it’s about them,” said Dunbar interim coach and athletic director Dana Johnson. “I’m just overwhelmed that they have truly stuck together and never fell down.”

“It was just a lot of chatter, like even throughout our own school that ‘Dunbar ain’t the same no more’ so we kept that in our ear,” Bert said.

Bert scored 14 points in the second half, culminating with a dagger from the right wing as the shot clock expired. Patterson made two free throws to trail, 61-60, and had one final shot at victory.

With 1.7 seconds left, Dawon Williams launched a full-court pass into the hands of John Thomas, whose 3-pointer bounced off the back of the rim, ending Patterson’s reign as 2A state champs.

Dunbar is still in play for a 17th state title, thanks to Bert, who helped his team rallied from an early nine-point deficit on the road.

“We prepared all season for this game,” said Bert, a sophomore. “It’s been a lot of coaching changes, staff changes throughout the year. We prepared all year for this, so I just knew I was going to go out with a fighting chance.”

The Poets had only two field goals as Patterson established an early 15-6 advantage. Dunbar quickly got back into the game with an 8-0 scoring run to trail, 15-14, a few minutes into the second quarter.

Charles scored seven points in the quarter for the Poets, who trailed, 29-25, at halftime. Alex Ferrer had 12 points to pace Patterson in the opening half.

The Poets continued to chip away during the third, beginning with 3-pointers by Bert and Keon Newsome.  A clutch dagger by Bert as the third-quarter buzzer sounded pulled Dunbar even at 44.

Charles’ putback lay-in gave Dunbar its first lead of the night. From there both squads swapped baskets throughout the fourth as the crowd roared louder and louder.

Finally, Bert gave the Poet faithful the biggest roar as his 3-pointer went through the cylinder for the lead late in regulation.

“He’s definitely a special player. That’s all I can say,” Johnson said of Bert. “He took this team on his back for a like a three or four-minute stretch. If it wasn’t for him taking a stand and saying ‘this is going to be mine,’ I don’t know what the outcome would’ve been.”

Ferrer finished with a game-high 26 for Patterson (14-11), which made 2 of 5 free throws in the final seconds, leaving it with Thomas’ desperation shot at the end. After winning a third state title with a senior-laden squad last season, the Clippers endured ups-and-downs with a young roster.

“It kind of went like we expected. We beat the teams that we were supposed to beat,” said Patterson coach Harry Martin. “We worked with the guys we got and we look forward to building these guys during the offseason.”

The Poets are a win away from College Park – something few imagined a month ago.