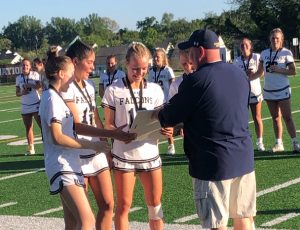 When Severna Park High girls lacrosse defeated Broadneck a few weeks ago, the Falcons knew the win wouldn’t matter if they didn’t win the rematch Monday in the Anne Arundel County championship.

Paced by a balanced offensive attack and strong performance on faceoffs, the Robinson Road school built up an 11-7 fourth quarter lead before fending off a late rally to win its first Anne Arundel championship since 2017. The Falcons bested Broadneck, 12-8, at Roberts Stadium April 28.

In the rematch Monday, Severna Park surged to a 5-1 lead behind five straight draw control victories. The Falcons led 7-3 at halftime.

Emma Marsh, Maddy Goger, Alyssa Gore-Chung, Theresa Bragg, and Sophia Miller each reached the back of the net for Severna Park.

Lexi Dupcak, who led all scorers with four goals for Broadneck, trimmed the Falcons’ lead to two with 42 seconds remaining, but the Falcons secured the draw and worked the clock down to secure the win. Julia Sokolowski added a pair of goals for the Bruins (12-3).

“It was a little too close,” Falcons coach Kaitlyn Hines said. “(Winning faceoffs) I mean, it’s huge obviously. You’ve got the ball; you have the opportunity to score, which is big. I think . . . with it close in the second half and them creeping back in, that last draw with about 40 seconds left was huge for us to really solidify and hold that win. Draws are key to the game.”

Severna Park, which completed a perfect run through Anne Arundel, will begin pursuit of a 14th state championship Friday. The Falcons host Crofton or Arundel in the Class 3A East Region II semifinals.

Broadneck, which won the 4A state crown last spring, begins its title defense Friday at home against Annapolis in the East Region II semifinals.