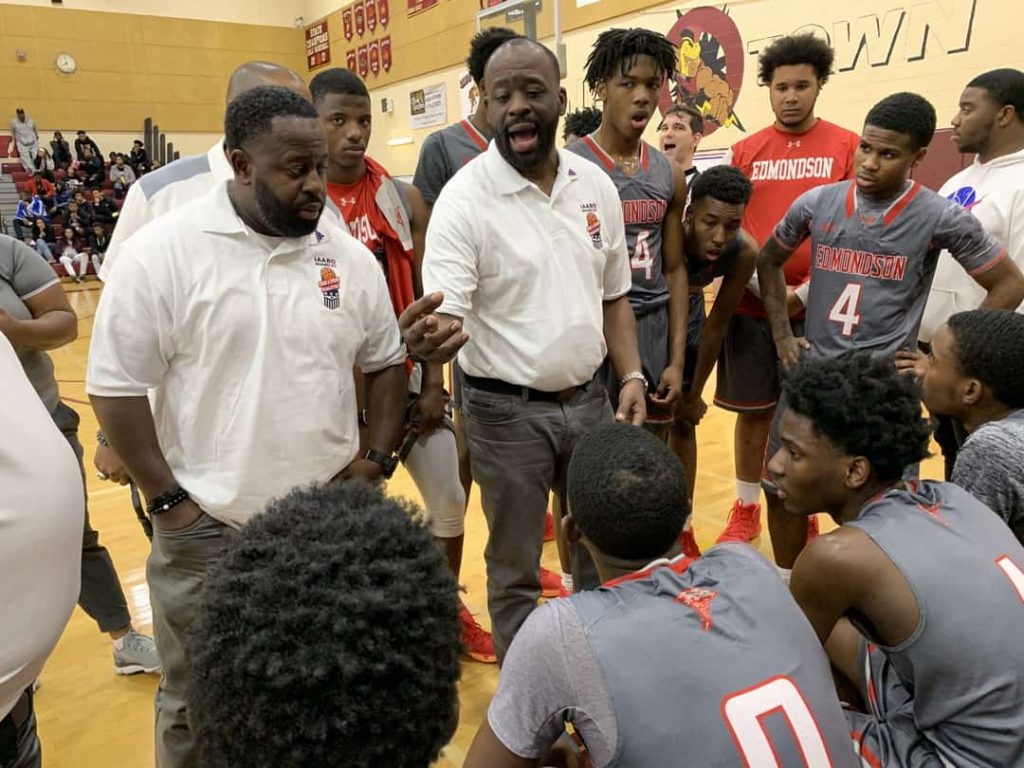 Edmondson coach Darnell Dantzler (center) talks to his team during a December contest. The No. 7 Red Storm are in the Class 1A state semifinals after their quarterfinal match at Crisfield was stopped in the third quarter Saturday, with Edmondson leading by 20 points. The game will not be resumed after Crisfield declined to travel to Baltimore to continue the match Monday afternoon.

March Madness had a different – and unfortunate – meaning Saturday in the state public boys basketball Elite Eight round.

The Class 1A state quarterfinal match between No. 7 Edmondson High and Somerset County’s Crisfield on the Eastern Shore was stopped in the third quarter after an on-court altercation.

The game – with Edmondson leading 49-29 with 3 minutes, 23 seconds left in the third – was to be resumed Monday afternoon at Edmondson with no spectators allowed.

Early Sunday evening it was announced that Crisfield would not travel to Baltimore City, and Edmondson was awarded the victory. The West Baltimore will take on Southern of Garrett County in a 1A state semifinal Friday at 5 p.m. at the University of Maryland.

Dunbar, which abruptly parted ways with first-year coach and former Maryland star Keith Booth before the end of the regular season, finished the season 11-13. The Poets won their 20th region championship, ending Patterson’s reign as 2A state champs in the North Region I final Thursday.

It will be just third time (2000 and 2009) Dunbar will not play in a state Final Four at the University of Maryland. Elkton’s bid for a first trip to College Park since 2004 ended in Frederick County with a 71-60 loss to Oakdale.

Oakdale (20-6) pulled away in the second half to advance its third straight Final Four. The Bears, who got 19 points from Alex Hawkins, will play New Town, Friday evening at 9 at Xfinity Center.

Marques Battle finished with a game-high 26 points for Elkton (14-11), which won its first region title (2A East Region I) since 2004. The Cecil County school hasn’t been to a state final since 1950.

Arundel fell to Richard Montgomery, 77-55, in a 4A quarterfinal in Montgomery County. Samuel Snag scored 19 points for the Rockets, who will play Henry A. Wise in Thursday evening’s state 4A Final Four.

It was heartache again for No. 18 Havre de Grace Saturday in Harford County. The Warriors lost to Prince George’s County’s Fairmont Heights in a 1A quarterfinal.

It’s the second straight year Havre de Grace lost at home with the chance to advance to the University of Maryland. Last year, the Warriors lost to Crisfield in the 1A East Region final.

On the girls side, National Academy Foundation’s postseason run ended in Western Maryland with a 72-28 loss to Southern of Garrett County.

It was no problem Saturday for New Town boys and reigning state champs Lake Clifton and Poly. The sixth-ranked Titans defeated Liberty, 70-50, in a 2A state quarterfinal contest in Owings Mills.

Leading 31-27 at halftime, the Baltimore County champ Titans open the third quarter with an 11-2 run en route to their state Final Four since 2016. New Town will play Oakdale, Friday night at 9 at Xfinity Center.

The defending state champs overwhelmed Catoctin, scoring the first 11 points en route to a 50-15 halftime lead. The second half was played with a running clock.

Next for Lake Clifton is a rematch with Prince George’s County’s Fairmont Heights, Friday afternoon at 3 at the University of Maryland. The Lakers defeated Fairmont Heights in last year’s state 1A semifinal round.

No. 3 Poly moved a step closer to a historic four-peat in 3A with an 80-43 victory over Frederick. Justin Lewis finished with 27 points, and senior guard Brandon Murray added 16.

The Engineers (24-2), ranked 22nd nationally by ESPN, was never threatened, building a 43-16 halftime advantage. Poly will play 16th-ranked Northeast in a 3A state semifinal Thursday afternoon at 3 at the University of Maryland.

It will be the final ride for Lewis, who will play for Marquette next season, along with Murray, Ian Wallace, Rahim Ali, Jahsiah Lamothe, Dominik Allison, Tyron Bethea and Montrell Jackson. The Engineers have won 10 straight since suffering its only area loss to top-ranked St. Frances Academy.

Though an overwhelming favorite, Poly won’t be complacent heading to College Park next week.

“Our guys, with the history that’s on the line, with the fact we have  seniors with so much time and love committed to our program, it’s not hard to draw that energy,” said Engineers coach Sam Brand, whose team has won 18 straight state postseason matches. “We’re going to bring it every night.”