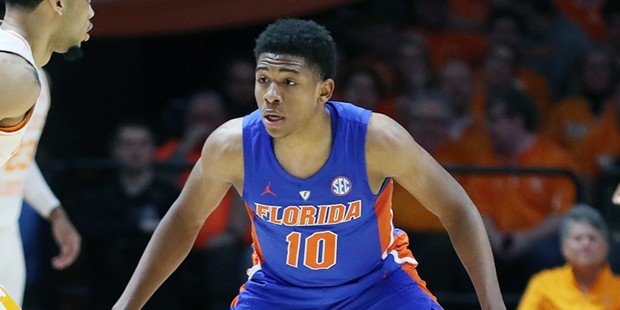 The 2020-2021 college basketball season is by no means a certainty in the age of Covid-19, but with many professional sports preparing for a re-start there is some optimism for college hoop season, which saw its post-season shutdown last spring just as the pandemic was taking hold in the United States.

When college basketball does resume, it should see a point guard who continues to emerge at the University of Florida – McDonogh graduate Noah Locke.

Locke has averaged 10 points per game over his first two seasons in Gainesville and is developing into an elite shooter. As a freshman, he set the school record with 81 made three-points and added 79 more as a sophomore. He likely would have broken his own record had the season not been cut short.

Locke is a difficult shooter to defend because of his 6-foot-8 wingspan and his ability to create off the dribble or convert in a catch-and-shoot situation.

As a sophomore he improved his scoring average from 9.4 to 10.6 and shot .481 from three-point range in SEC play, tied for the highest in conference play of any player with 50+ makes since 1996. He had a season-high six treys against Vanderbilt and made three or more in 10 SEC games. His 15 consecutive games with multiple threes is the best streak in Florida history.

Other standout games included his first double-double (16 points and 10 rebounds) against Long Beach State, 18 points in a 21-point comeback win against Alabama and season-best 21 points in a road victory over Texas A&M.

As a freshman starter he had a streak of nine straight double-figure scoring games, which was the longest such streak by a Florida freshman since NBA star Bradley Beal in 2010-2011. He had six games with five-plus three-pointers and explored for a career best 27 points, including seven three-pointers, in a win over Texas A&M.

At McDonogh, he graduated as the school’s all-time leading scorer with 2,350 points.