Boys and girls basketball double-header at Goucher College could be the start of an annual showcase for neighboring schools (VIDEO HERE!!)

Towson’s Daija Fitchett puts up a shot over Loch Raven’s Nadja Franklin during the second half of Friday’s Battle of the Beltway at Goucher College. Fitchett finished with 11 points as the Generals held off the Raiders, 35-30.

Loch Raven High athletic director Mike McEwan and his Towson counterpart, Justin Nash, are hoping the first Battle of the Beltway turns into something big.

If the inaugural doubleheader featuring the boys and girls basketball teams from the AD’s neighboring Baltimore County public schools squaring off against each other on the court at Goucher College is any indication, it could happen.

After all, McEwan said that about 600 tickets were sold for the games that took on a special meaning by being staged at a neutral site on the Gophers’ floor, which is halfway between the schools.

He came up with the idea over the summer after noting that the only meeting this season between the rivals would be close to the holidays, lending a festive flair to the showdown.

Moreover, McEwan knew that because Goucher men’s basketball coach Tom Rose’s daughter, Julie, plays for the Raiders, he had a chance to secure the gym at a time when some alums would be home from college.

When Rose brought up the plan to Nash, both agreed it was worth a try.

“I was really excited when Mike called with the idea about playing at Goucher,” Nash said. “There was no hesitation from me….I immediately said yes. I knew the kids would be all for it. We played field hockey and soccer at Goucher before, and our kids had a great time playing in front of a large crowd. Goucher is a hidden gem and we are thankful for the opportunity. We look forward to making this a tradition with our two programs.”

The players and coaches were also buying in to competing in the special event.

“My girls compete against them in soccer, basketball and lacrosse, so the game is a very big deal,” Towson girls coach Rebecca Cahall said. “It’s a very cool thing.”

Loch Raven girls coach Jerome Ragsdale said that “the kids loved it. They were very excited and a little nervous” about playing in front of a big crowd.”

Unfortunately for the Raiders, it was an especially frustrating night for them because the Generals swept both games.

The Towson girls (2-1) jumped out to a 10-2 lead early after senior guard Kayla Sullivan converted four of six free throw attempts after she was fouled from beyond the arc on successive plays.

Senior guard Audra Lucas followed with a jumper and a layup before senior guard Daija Fitchett scored from the paint on an assist from Sullivan,

However, Towson gradually pulled away to post a 23-15 halftime lead before opening the third quarter on a 5-0 run on two buckets and a free throw by Fitchett.

The Generals’ biggest lead was 15 points, although Loch Raven fought back from there to make a game of it.

The Raiders (3-4) were within six points of tying the game until Towson junior guard Erin Steinberg buried a clutch three-pointer with just under four minutes remaining in regulation to give her team just enough breathing room to hold on down the stretch, even though a three-pointer by Loch Raven junior point guard Mikayla Kemp cut the lead back to six points.

“Once we got under four minutes (remaining), I told the girls to just slow it down,” Towson coach Rebecca Cahall said. “We just needed to let the clock run.”

Ragsdale said that Towson played a nice floor game “and handled our pressure really well. They were the better team tonight.”

Sullivan said that Towson was ready to go after having two weeks to prepare after not having played a game since Dec. 5.

“It’s a big matchup,” she added about the rivalry. “We played them in summer league, and it was a high-intensity game. We were ready to play a game and we gave our all on the court.”

The boys game was lopsided from the get-go, as Towson built a 27-11 lead midway through the opening period and kept exerting pressure.

“We had no idea what to expect,” said senior forward Ben Tribbe, whose throw-down in the third quarter was his first ever in a game. “We hadn’t seen any tape on them. We got a huge boost from the crowd tonight.”

Towson’s Connor Brown puts up a successful runner during the boys’ portion of the first Battle of the Beltway with Loch Raven. The Generals routed the Raiders for their second victory of the season.

Junior forward Derrick Shoats also had several dunks for the Generals, who improved to 2-2 on the season while the Raiders fell to 1-6.

BATTLE OF THE BELTWAY 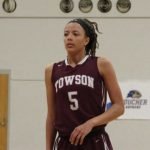