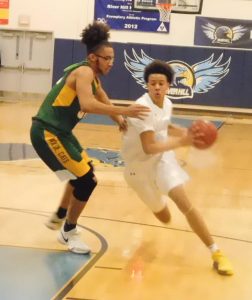 While the old axiom about defense winning championships has been proven true time and time again, there’s also something to be said for sprinkling in some good offensive play to nail down a big victory.

River Hill High did just that early in its Class 2A South Region Section I boys basketball semifinal Monday night against Howard County rival Wilde Lake. The Hawks bolted to a 13-0 advantage after the opening tip and used their defense and deliberate tempo to hold off the Wildecats, 47-43, in Clarksville.

“We punched them in the mouth early,” said River Hill sophomore guard Nick Marshall, a Mount St. Joseph transfer who led all scorers with 14 points. “My dunk really got everybody riled up.”
The Hawks faithful, however, had to endure some tense moments late. With 43 seconds left in regulation, Wilde Lake senior guard Trea Keys followed a brilliant defensive maneuver at the other end of the court and converted a pair of free throws to shave the Hawks’ lead to 43-40.

A steal by Emmanuel Wright quickly followed by a close shot that would not fall helped River Hill (16-7 overall) keep the lead. The Hawks drained four of their final free throws to offset a Taha Ali three with 1.9 seconds left.

In addition to Marshall’s flush, the Hawks nailed three 3-pointers during the early 13-0 tone-setting explosion with Elijah Feeney accounting for a pair of bombs and junior wing Jackson Graves knocking down the other one.

Wilde Lake  was reeling until Wright banked in a long jumper with 16 seconds remaining in the first quarter to end the drought and begin a 10-0 run built on a jumper by Keys, layups by Kwaku Boampong and Keys and a stick-back by Ali. The Wildecats (15-8) were within striking distance while still trailing, 13-10, only to watch the Hawks put up eight unanswered point to close the first half on top, 21-10.

A lefty hook and a jumper by 6-foot-4 senior OJ Okojie started the sequence that also included Graves’ three and a free throw by Josh O’Brien. The Hawks maintained a fairly comfortable advantage into the fourth quarter before Wilde Lake roared back to make it a game late.

It started with a Keys triple followed in short order by a similar shot by Wright, slicing the deficit to 32-26. Later in the period, Ali got in the long-range act as well before Boampong’s put-back made it, 36-33, with just under four minutes remaining in regulation.

The Wildecats missed a layup attempt that would’ve put them down, 43-42, in the final 30 seconds. The real culprit from Wilde Lake’s perspective was the early Hawks’ scoring spree.

“It was a huge hole,” Wilde Lake coach Deon Wingfield said. “And we couldn’t get out of it. But I liked our fight. We never gave up.”

“They were playing with urgency, and we weren’t,” said River Hill coach Matt Graves. “Thanks goodness they missed that chippie at the end.”

The Wildecats were without senior shooting guard Marc Marshall, who averaged 18 points per game this season. Marshall suffered a season ending finger injury about two weeks ago.

“Being down a man, I think that’s why we were a little stagnant to start the game,” Winfield said.

“We kind of fed off each other,” he said. “And we got the sixth man — our home crowd — involved.”

Graves, who guided River Hill to the 3A state title in 2007, said his team’s strong defensive showing was a key.

“We tell our guys all the time that you can have bad shooting days, but you can’t have bad defensive days,” he said.

Speaking of shooting, he said that the Hawks “hit shots at the right time.” They will need another spirited effort Wednesday against Oakland Mills in the second final.

The Scorpions split with River Hill during the regular season. Oakland Mills (18-5) got 19 points from Daeshawn Eaton and Frederick Eiland added 18 in a 77-60 victory over Marriotts Ridge (14-9).

“There are no games that you feel really comfortable playing against a Howard County team this year,” Graves said. “Every game is a dogfight.”