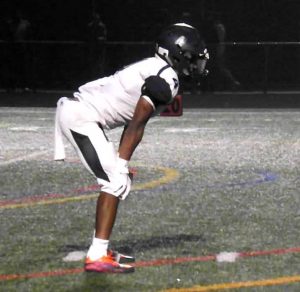 Devin Dawkins was busy for Howard football Friday night. The senior running back rushed for 125 yards as the 10th-ranked Lions defeated Long Reach in Columbia.

Howard High football coach Ross Hannon said his team was not ready for the big lights the first two weeks of the regular season. The Lions are ready now.

Playing at neighborhood rival Long Reach, the 10th-ranked Lions dominated on both ends for a 22-12 decisions in Howard County action.

The Lions used a heavy dose of senior standout running back Devin Dawkins to improve to 5-1 overall and in HoCo play. The Ellicott City school remains one game behind eighth-ranked Glenelg, which handed Howard its only loss.

Dawkins, the reigning HoCo Offensive Player of the Year, carried the ball 25 times 125 yards and a touchdown Friday. Last week against River Hill, he only carried the ball five times before tweaking his ankle.

“We needed this win over a 3A school since playoffs are coming, everyone knew how big this game and everyone stepped up and play well tonight,” Dawkins said.

“The guys keep getting better every week, things are slowing down for us, we are running the ball well and we are developing some really good things in the passing game,” Hannon said.

Long Reach couldn’t get anything going offensively, only garnering 85 yards.

Long Reach (3-2, 3-2 Howard) forced and recovered a fumble at midfield on Howard’s first possession after crossing into Lighting territory. The Columbia school wasn’t able to take advantage and gave the ball back to Howard.

Dawkins finished off an eight-play, 66-yard drive with an one-yard walk into the end zone. Long Reach’s Luis Gooden got the ensuing kickoff and bolted his way past the entire Lions special teams unit en route to a 95-yard  touchdown.

“You have to play all three phases of the game, and we let and a very good athlete beat us on that kickoff return,” Hannon said. “But I am happy that they guys were able to respond well after that play.”

The Lions got a little creative in the late in the second quarter as senior quarterback Jerry O’Neal (8 for 12, 114 yards, touchdown) pitched the ball in the backfield to Gabe Williams, who threw a strike to Aidan O’Connor in the middle of the end zone for a six-yard touchdown.

After stopping Long Reach to start the second half, Howard marched 86 yards in 15 plays capped with a beautiful Williams catch from O’Neill. Williams absorbed two hits, spun and out of both collisions, and raced down the left sideline to the end zone from 32 yards out to put the defending Howard co-champs up three scores.

“He [Williams] caught me off guard on that one,” Dawkins said about the Williams catch. “A lot of people underestimate him, so I glad people could get a chance to see what he can do.”

With the aid of a couple of penalties, Long Reach got its only offensive score as backup quarterback Jose Ribalta threw a five-yard pass to Jason Smith with less than two minutes remaining in regulation.

“We had our opportunities and we did not capitalized,” Long Reach coach Jamie Willis said. “We need to make the plays we are supposed to make. We have to be better.”