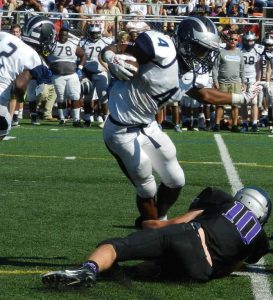 Howard running back Devin Dawkins (4) tries to avoid Long Reach’s John Shupe during the first half of Saturday’s Howard County football contest. Dawkins scored a touchdown as the No. 6 Lions won, 20-6, in Columbia.

From the pregame entrance to postgame handshakes, Saturday’s Howard County football match between Howard High and Long Reach was intense. The rivals are separated by less than three miles.

In a front of a huge homecoming audience in Columbia, the No. 6 Lions again claimed bragging rights with a 20-6 decision over the 12th-ranked Lightning. Junior running back Devin Dawkins rushed for 105 yards and a touchdown for Howard (6-0 overall, 6-0 Howard).

The two-time reigning HoCo champs used two special team plays to win for the 39th time in 40 league decisions. The Lions won for the seventh straight time in the rivalry match that started in 1996.

“This is what makes high school football so special and unique, you’re separated by a half-mile, you’re in the same rec leagues, the parents and the kids know each other,” said Howard coach Ross Hannon. “It’s an emotional game, a great crowd, it was a physical game. The scoreboard might say 20-6, but it was a pretty even game.”

“We knew coming in it was going to be a lot of talk so the coaches wanted us to keep our heads and keep executing,” said Dawkins. “That’s what we did.”

The Lions managed 168 yards Saturday, but special teams and defense did the rest. Anthony Reid fell on the ball in the end zone for a Howard score after a botched Long Reach punt attempt for the game’s first score.

Howard had command with a 14-0 first quarter lead as senior quarterback Robby Porter’s 4-yard keeper capped a seven-play, 29-yard drive. After not getting past its 41-yard line in the first half, Long Reach drove to Howard’s 34 to start the second half, but Lion defensive back DJ Howard got a deflected pass for an interception.

The Lightning got to within 14-6 on Tyler Moore’s 2-yard jump pass to Tre’Von Morgan on 4th-and-goal. Long Reach went three-and-out on its next drive, and Agbai broke through the line to get a hand on Ansley Jean’s punt.

The Lightning offense was unable to respond, finishing with 121 yards Saturday. After starting 3-0, Long Reach (3-2, 3-2 Howard) has been outscored, 62-12, in its two last decisions.

“We gave up one touchdown on defense. They got a special team touchdown and a block on the 10-yard line,” said Lightning coach Jamie Willis, whose team lost, 14-7, at Howard last fall. “We got to get better on offense. We got to figure it out.”