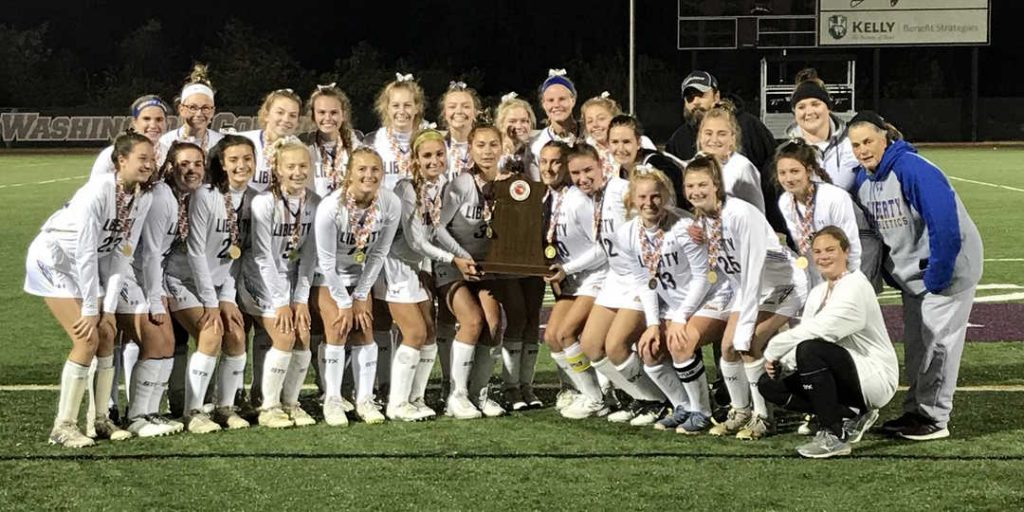 Fortunately for coach Brenda Strohmer, she has until August to devise a new, bigger goal for her Liberty High field hockey team.

The 2019 Lions set the bar pretty high this fall, winning the state Class 1A championship Saturday night to finish 18-0 and likely seal the final No. 1 spot in the Varsity Sports Network Top 20.

Although Strohmer’s teams also won state titles in Class 1A in 2016 and in Class 2A last season, this is the first time they’ve finished undefeated. Riley Pardoe scored early and Caitlynn Szarko scored the late game winner as the Lions nipped Washington, 2-1, at Washington College in Chestertown.

“It’s a good cherry on the top,” said midfielder Christine Goetz, one of nine Lions seniors.

This fall, Lions rolled into the state final by outscoring their two previous playoff opponents by a combined score of 13-1, but Washington, from Somerset County, gave the Carroll County champions all they could handle.

The teams were tied going into the final 14 minutes until Szarko scored on a reverse chip from the left side that sailed over Washington goalie Hannah LaRue’s shoulder and into the far side of the cage with 13:26 left in the game.dddddddd

The sophomore said she had not scored on that shot this fall.

“I saw an opening and I’d been working on that all season,” Szarko said. “I haven’t been able to do it and I was like, ‘Why not? State game.’ I would regret it if I don’t do it, so I just went for it.”

The Jaguars (10-4-1) had several chances to tie the game, especially on two penalty corners after time expired, but the Lions kept them from getting a shot. In the first half, the Lions also held off a Washington penalty corner after time ran out.

Washington, aiming for its first title since 2000, showed off a style that mirrored Liberty’s aggressive short passing game and they pressured the Lions in a back-and-forth contest.

Pardoe scored the first goal deflecting a pass from Szarko past LaRue with 16:19 left in the first half.

The lead lasted about 25 minutes until sophomore McKenna Horner drilled a shot from about five yards out on the right past Lions goalie MiKayla Bull into the far low corner of the cage to tie it for the Jaquars.

Although the Lions have scored a lot of goals this season, they’ve also won half a dozen one-goal games, including three in overtime. Goetz said beating No. 5 McDonogh School, 1-0, in overtime on Oct. 1 was a major milestone and helped them handle the pressure that comes with a tie game.

“That helped us being undefeated, because if we know if we ever got down in a game, we know how each other plays and we could work up to score again,” said Goetz of the win over the Eagles which came on the heels of McDonogh’s win over then-No. 1 Garrison Forest School, the IAAM A Conference champion now ranked No. 2 behind the Lions.

“I want to keep that expectation,” said Strohmer, in her eighth season as head coach. “Just like I always praise the rec teams, the club teams — the girls are playing more and that helps. We just have to pull them together and [teach] minor Xs and Os and that gives us more time to focus on getting here.”

With a perfect season completed, there’s still that one nagging question though.

“It’s like what can I give them for a goal?” Strohmer said, adding that a three-peat would probably be a good one.