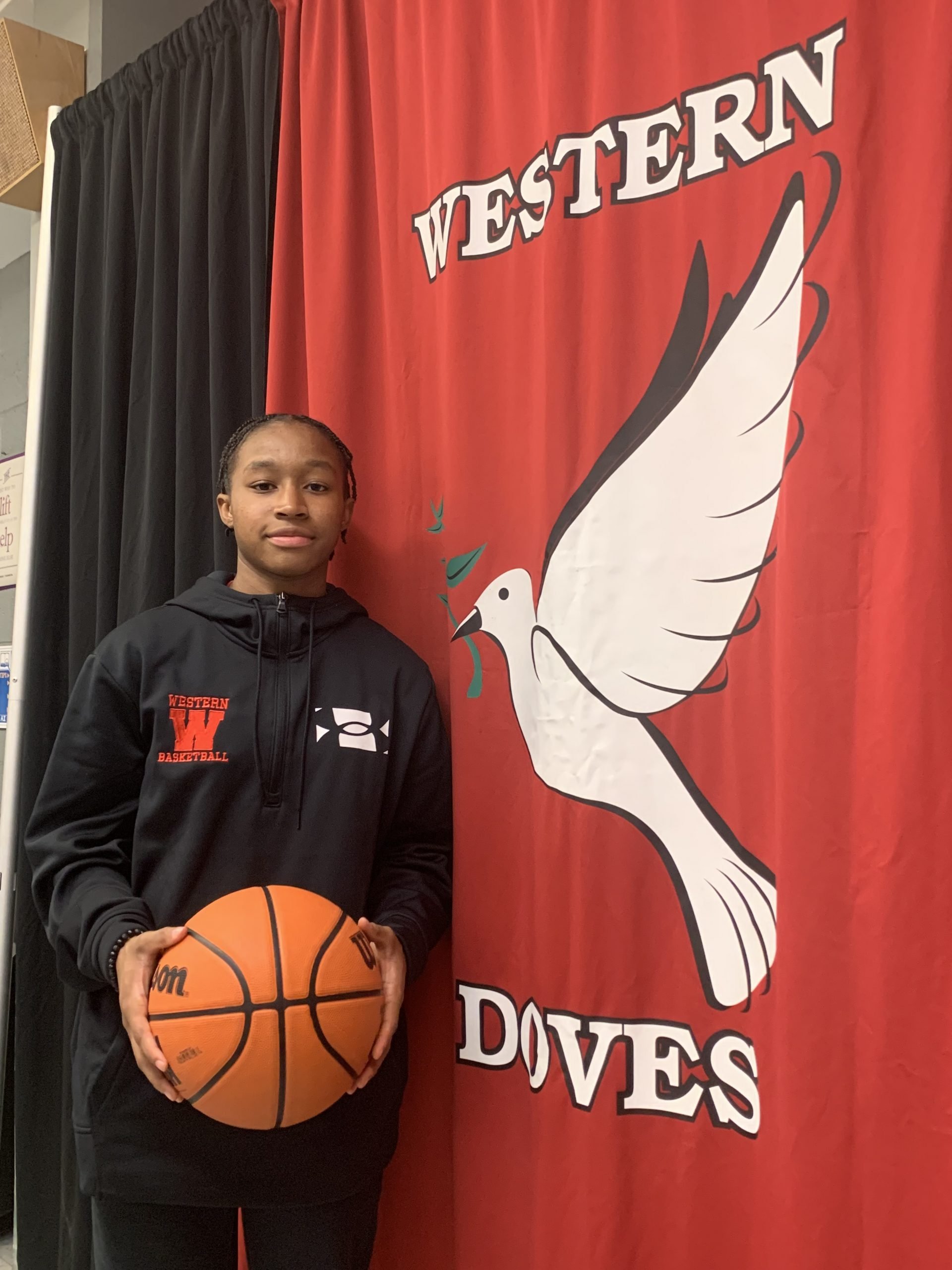 PLAYER OF THE YEAR

When Ny’Ceara Pryor started playing AAU basketball at 9, she was the smallest player on the floor and she reminded her coach, AJ Scott, of former St. Frances guard Shatyra Hawkes, the fast, tenacious All-Metro guard known as “Lil’ Mama”, so he recycled that nickname for Pryor.
As a senior at Western, nothing about Lil’ Mama’s game was “lil’.”
The 5-foot-3 point guard scored 40 points in the Class 4A state championship game to lead the No. 3 Doves to their first state title in 27 years. She’s only the sixth girl in state tournament history to score 40 or more points and only the third to score that many in a state final.
With her name etched among the greats who have played basketball in the state tournament and in Western’s storied program, Pryor is Varsity Sports Network’s 2021-22 Girls Basketball Player of the Year.
With just seven players on the roster, the Doves needed Pryor to score big and she did. She averaged 30.3 points this winter and her 40 points in the state final were just nine points shy of the record. She still can’t quite find the words to describe earning a spot among the state tournament’s all-time scoring leaders.
“I didn’t know that I had 40 points until the end of the game when my teammate looked up (at the scoreboard) and was like, ‘Oh my gosh, you got 40 points,’ and I look up and I said, “Forty points. Oh my gosh.’ I didn’t know about that… To me, I feel like I earned that spot on that all-time leaders board, but I still don’t have nothing to say about the 40 points, because I just wanted to win the game.“
Her performance in the 81-68 victory over Montgomery County’s Clarksburg was even more impressive because Pryor played the entire second half with four fouls. She scored 25 points in the second half and went 9-for-10 from the free-throw line in the final 1:05. She also led the Doves with 11 rebounds and five assists and had two steals.
For the season, Pryor averaged six assists, five steals and five rebounds as the Baltimore City champion Doves (20-2) finished with 14 straight wins and defeated two previously unbeaten opponents in the state tournament — then-No. 5 and Anne Arundel County champion Glen Burnie, 61-46, in the semifinal, and Clarksburg, the Montgomery County champion, in the final.
Clarksburg coach Sissy Natoli used a box-and-one on Pryor at times, but even that couldn’t stop her.
“She was a heck of a ball player,” Natoli said. “She handled the ball well, she slashed to the basket nicely and she was a finisher… She kept on moving all over the court. Her talent was fabulous in terms of ball possession, floor vision. She made some amazing plays.”
The Coyotes wanted Pryor to get that fifth foul, but as the second half wore on, they seemed more afraid of getting fouled themselves and didn’t stand up to her drives. She continued to weave her way around the Coyotes’ 6-footers to get to the basket or to the line.
Pryor said the Doves watched a lot of film of the Coyotes and saw the gaps in their defense. She knew that with her speed, she could use her height to her advantage.
That wasn’t always the case. 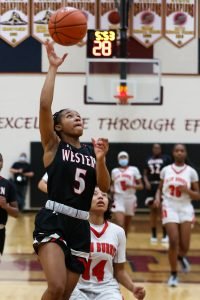 Ny’Ceara Pryor capped her varsity career with a 40-point performance in the Class 4A state final against previously undefeated Clarksburg at the University of Maryland. She averaged 30.3 points as Western won its first state championship in 27 years. (photo – Sports Majors)She started playing basketball in the first grade with the in-house Youth Sports Program in Baltimore, but it was not love at first sight. It took her a while to develop the big game that would transcend her 5-3 size.

After her first game, she told her father, Nathaniel Pryor Jr., who had played at Dunbar, that she didn’t think she wanted to play anymore.
“I was horrible at it, and he was just like, ‘You can do all the things through Christ that strengthens you,’ so I just went in there and I played every game, knowing I could do everything through Christ that strengthens me.”
As the fastest girl on the court, Pryor could easily get to the hoop, but it took her a while to get comfortable with contact. When she did, she was almost unstoppable.
“That’s why I always used to miss layups,” Pryor said, “but now I’m not intimidated at all. Now I just go in there and I take what the defense gives me no matter how tall they are, how short they are. I just go in there and do what I’ve got to do…I just think my height is an advantage to me, because I know how to use it.”
She wanted to play for Western because she wanted to play with her sister, Ty’Keara Burden, who was a senior during her freshman season, and because she wanted to play for coach Tasha Townsend, a former Doves player.
“I wanted to play under coach Tasha, because she’s a Black woman in this coaching environment that’s dominated by men, so I admired that and that’s why I wanted to come to Western to be part of this history,” Pryor said.
Al Schell, recruiting analyst for prepgirlshoops.com and a long-time area coach, said he has always been struck by Pryor’s fearlessness and her presence on the court.
“I always liked her poise. Even when she came into my gym in fourth grade, there was something different about her,” Schell said.
“In the fourth grade, she’s dominating everything and her size was intimidating and it still is. There are bigger players, but a lot of times, the guards in the area would challenge her and they would do their best to stop her and then it just became obvious that, ‘We’re not going to stop her.’ And a lot of times like Clarksburg late in that game, it was like they were getting out of her way, like they had foul trouble. The kids, a lot of times, were intimidated by her size and the speed, because you don’t want to get shown up or you don’t know exactly what she’s going to do. She had poise and she used her physical stature to her advantage.”
Throughout this season, Pryor scored big in the big games. She scored a career-high 41 points in an early-season 72-70 loss to Archbishop Spalding and 28 in a 56-48 loss to No. 2 St. Frances. She scored 35 in the Doves’ 75-51 win over No. 5 Poly, the Class 3A state champion, in the Baltimore City title game.
Rated the No. 3 senior in Maryland by prepgirlshoops.com, she finished her three-year high school career with 1,249 points, 484 assists, 369 rebounds. The Doves reached the final four all three years she played.
Her junior season was canceled by the COVID-19 pandemic.
Pryor, also a sprinter on the Doves track team, doesn’t just rely on driving to the hoop for her points. In the past few years, she’s developed excellent range on her jump shot as well. In the state title game, she was 2-for-3 on 3-point shots.
Townsend said Pryor has an exceptional work ethic and that learning to be patient and understanding more about opposing defenses has helped her develop all aspects of her game.
“She wants to get better. She wants to be in the gym. Basketball is in her heart….” Townsend said. “There’s never a time when she doesn’t want to get better, so every year she’s gotten better… We got a shooting machine two years ago, so now she’s confident in her shot. She was already comfortable going to the basket, so just imagine once we got that outside game going, that’s all we needed, so she completed her game through the duration of every year. She worked hard every year to add to her game. She should be confident.”
Next year, Pryor will play for Sacred Heart University where she plans to study to become a teacher.