Lights out down South 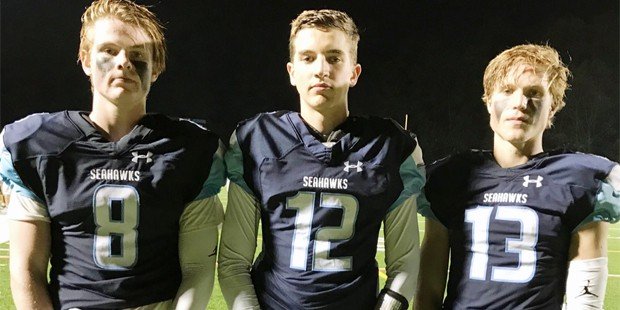 It was “Showtime” down south like old times Friday night at Joe Papetti Field. It was Senior Night at South River High in Edgewater, and the Seahawks football seniors, with help from a slew of others put on a show.

Quarterback David Foust and two of his talented pass receivers in Sean Leonard and Jamison Gaskins, all seniors,  were in the starring roles as the 9th-ranked Seahawks humbled Old Mill, 47-9 to clinch the Anne Arundel County championship and can clinch the top seed in the Class 4A East Region playoffs with a victory at North County (3-5) on Friday.

Junior running back Delvin Johnson did not score, but his 172 yards contributed heavily to the team’s success as his consistent ground gainers help set up several scores and eased the pressure on the Foust passing game.

With Foust throwing for 207 yards and 4 TDs, three in a 28-point second period explosion, Leonard grabbing two of the scoring passes and recording rare offensive and defensive takeaways on back-to-back plays and recovering a fumble in the end zone while Gaskins also gathered in a pair of Foust scoring aerials, the Seahawks became the first team in school history to go 8-0 since the 1985 team.

It’s ironic that team which finished 9-2 with a playoff loss was coached by the legendary Joe Papetti, who started the football program in 1978 and was posthumously inducted into the Anne Arundel County Sports Hall of Fame this past Wednesday night.

Papetti had also started the Glen Burnie program in 1964 before moving to South River and led the Seahawks to four of their nine playoff appearances during the 80’s and finished with 154 career wins, fourth in county history. Papetti died in July of 2010 after setting the standard in Edgewater and his name is on the Stadium field at the school as previously mentioned.

“At 8-0 you can’t ask much more from the kids up to this point, but there are still bigger goals ahead for us in the playoffs,” the Hawks’ 6th-year coach Ed Dolch whose team upset then 10-0 county champion Broadneck last season in the playoffs before losing to finish 7-5 overall. “We can enjoy this one for a night and regroup tomorrow (Sat.) and shift our focus to North County.”

Old Mill (6-2) had two short leads in the first half that were short-lived in 3-0 after the first period on a 42-yard field goal by Jackson Burleson and later by 9-7 in the second quarter on a one-yard plunge by quarterback Myles Fulton. A 35-yard jaunt by Caron Tull, who led the Patriots in rushing with 71 yards, set up the Fulton score. The Pats controlled the football in the first 12 minutes as South River ran only six plays and consumed eight minutes on the opening drive culminated by the Burleson 3-pointer.

“That was definitely not the game plan, it was kind of our worst nightmare,” Dolch said. “We wanted to play our pace which is more up-tempo. They want to keep it on the ground, grind you up and eat up the clock and keep your offense off the field. Our game plan was to get a fast start and put them behind and put them out of things they feel comfortable with. We started executing our game plan in the second quarter and things took off from there.”

Sure did take off.

A perfectly thrown bomb by Foust to Leonard covered 51 yards to the Old Mill one-yard line to start the second period and Sean Adams crashed in from there with Kirby’s first of five extra-point kicks true for a 7-3 South River lead. The party was on despite an ensuing 7-play, 60-yard drive by the Pats to retake the lead on Fulton’s score by 9-7 (missed extra-point). It would be Old Mill’s final score of the night. It was ALL South River after that.

Foust, who has yet to choose a college and is considering a walk-on opportunity at the University of Maryland, would masterfully direct drives of 71, 76 and 68 yards to lead the Seahawks to a commanding 28-9 lead at the break. The 6-foot-4 Foust would complete 10 of 15 passes for 207 yards, 4 TDs and no interceptions. Leonard caught 4 passes for 147 yards and two touchdowns.

“I trust my receivers and if I put it up there they’re going to get it,” said Foust whose 25 TD passes are believed to be a school record. “They’re making me look great.”

Foust said he and his receivers, all of whom he credited in addition to Leonard and Gaskins, practice putting the ball up with his receivers going up in the air to bring the pigskin down.

“The No. 1 seed and 8-0 and all that is amazing, but it really doesn’t mean anything,” said Foust. “It just determines who we are going to play and I don’t want us to get big heads and get ahead of ourselves. We have North County next week and we have to start preparing for them and look ahead after that. We can’t slack this week and have to work harder than ever.”

That attitude is prevailing among the Seahawk players who look to make this an unforgettable campaign moving forward.

Leonard represents the tenacity of this current South River team. In the 28-point second quarter eruption, Leonard literally took away a Foust pass from two defenders in the end zone for a 22-yard touchdown pass to give the home team the lead for good at 14-9. On the first Old Mill play from scrimmage after the kickoff, Leonard intercepted a pass and the Hawks marched 76 yards in eight plays to a Gaskins 8-yard touchdown reception.

Then in the third period with just 14 seconds remaining, Leonard recovered a fumbled punt in the end zone for six more points and a 34-9 lead. Give him a take-away on both sides of the ball which doesn’t happen very often in high school football.

When we (notice the WE not I) got that fumble recovery for the touchdown, we knew there was nothing they could do to stop us and we had the game in our hands,” said Leonard, who was also a key member of the outstanding South River baseball team last spring latched onto a 45-yard touchdown pass from Foust in the final period.

After last week’s win (48-41) over Broadneck, we had to focus on our tackling and we did and came out tonight tackling much better and our defense had a lot to do with this win.”

Gaskins, who had the 2 TD receptions and is headed to Towson to play lacrosse, echoed Leonard’s remarks and added that “it was real emotional for us on seniors night in such a big game and we used our emotions to come out and play our best game and it really showed as we came together on both sides of the ball.”