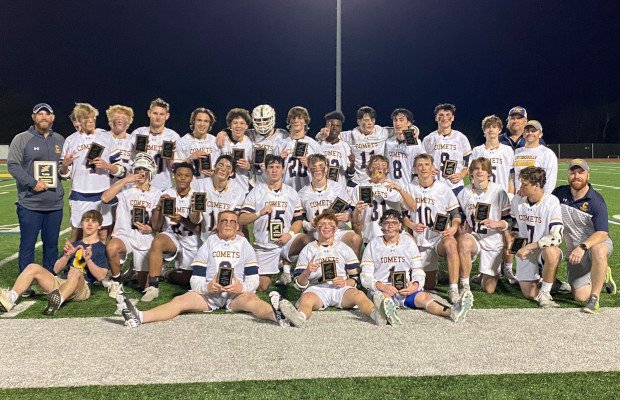 Byron Newman was a little quiet after he scored No. 11 Catonsville’s first three goals against 13th-ranked Hereford in the Baltimore County championship game Monday night.

The senior midfielder, though, made a lot of noise with 13 seconds left in regulation when he bullied his way to within five yards of the goal and whipped a shot into the net with two defenders draped over him to lift the Comets to the title while preserving their unbeaten season.

As he was being sandwiched by the defenders, Newman moved his top hand to the upper part of his stick “for better protection” before netting the game-winner. 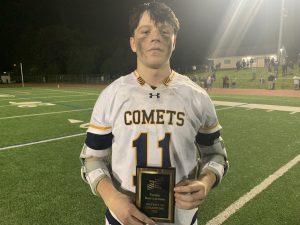 Byron Newman was clutch for Catonsville boys lacrosse Monday. He scored four goals, including the game-winner with 13 seconds left in regulation, giving the undefeated and No. 11 Comets a 8-7 victory over Hereford in the Baltimore County title game.

“It was the biggest goal of my career,” he added.

Catonsville coach KR Schultz said that Newman’s work ethic separates him from many of his peers.

“He’s just so dedicated to his craft,” Schultz said. “He lives and breathes lacrosse.”

Hereford (10-3) inched ahead in the final period on a rocket by senior midfielder Logan Sinsebox off a nice pass from Gibbons with 4:20 to go, only to yield the equalizer less than a minute later when Catonsville sophomore long-stick William Roberson spotted senior attackman Jay Rualo all alone on the wing for a sidewinder he whistled into the net.

“He’s an elite shooter and has a high lacrosse IQ,” Schultz said about the Calvert Hall transfer. “It was his time to can a shot — and he sure did.”

That set the stage for Newman’s heroics, which came on an unscripted play.

“He took it upon himself,” Schultz said.

The Bulls finished the first quarter on a 3-0 run fueled by Gibbons, senior midfielder James Traynor and junior attackman Baylor Davis — in his first game back after suffering a serious injury against Perry Hall — to take a 3-2 advantage.

Newman and Bolster put the Comets back on top before Hereford senior midfielder Collin Lee’s rocket sizzled inside the far post to deadlock the score at 4-4 with less than a minute left in the opening half.

Newman said that Catonsville is upbeat heading into the state playoffs that begin May 13.

“We’re more motivated than ever,” he said. “With (close) games like these, we know that we can’t take our foot off the gas.”

Hereford made a couple of adjustments to cool off Newman after his hot start, which helped the Bulls nearly pull off the upset.

“We came out and then got our feet under us,” Hereford coach Kyle Leppert said. “We got back to sliding (to Newman) when we wanted to slide,” rather than going too early and leaving a gap in the defense.

“We couldn’t be timid with our chances,” Leppert said.

The coach added that he liked his team’s energy as it prepares for postseason play.

“In year’s past, we’ve had byes,” he said. “But a long layoff can make a team sedentary. It gives us things to work on.”