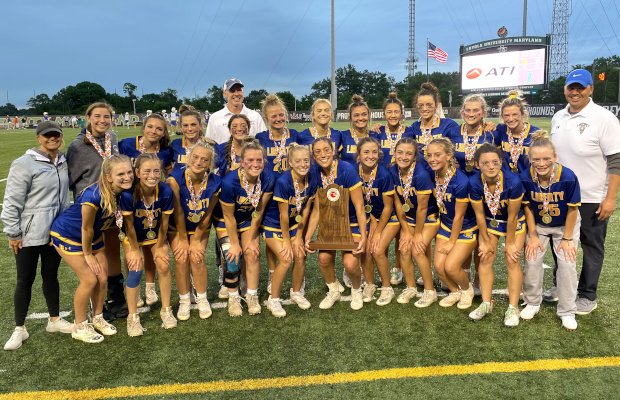 A year ago, Liberty’s Val Thompson breathed a sigh of relief when the Lions slipped past Fallston by a goal to win the Class 1A state girls lacrosse championship. This year, the senior attacker and her teammates had a little more breathing room.

Thompson kept the ball in her stick for the final seconds to seal a 9-4 victory over the No. 16 Cougars for the repeat Tuesday night at Loyola University’s Ridley Athletic Complex.

“At the end, I saw the ball beside me and I was just like, ‘There is no one else getting in the way.’ I just really wanted that last handle on the ball and I think it was great to finish off strong. Last year, we were sweating it and I think that’s a great improvement,” said the Towson University-bound Thompson, who scored twice in the title game and led the Lions with 74 goals this season.

Although the Cougars (13-3) had a brief 2-1 lead, the Lions (12-7) rebounded with consecutive goals from Jenna Evans, Thompson, Riley Matthiesen and Emily Spampinato for a 5-2 lead with 9:09 left in the first half.

Evans, Thompson and Matthiesen also dominated the draws to give the Lions a huge advantage in possession especially early on. The Lions won the first six draws of the game and nine of 10 in the first half.

Evans, a junior midfielder, took the draw but not the credit.

“The main thing is that I trust my people on the circle a lot,” Evans said. “If I push it out, I can trust them to get the ground ball, so if I try to push it somewhere specific, I can trust Riley and Val on the circle to get it.”

During Liberty’s four-goal run, the Cougars had possession only briefly. Their only shot during that stretch sailed high.

“I think the big difference would have been the draw controls,” Fallston coach Maddie Palko said. “Liberty did an excellent job of maintaining control over the draws and they were able to capitalize off of that.”

The Cougars, who won the last of their two state championships in 2012, rallied to pull within 6-5 at the half when Mia Salvatierra fed Ava Lambros for back-to-back goals.

The Lions, however, would shut them out in the second half on a strong defensive effort led by Julia Lucas, Izzy Lucas, Mariah Williams, Sydnie Bolger and goalie Emily Pond, who made three of her seven saves in the half, including a terrific point-blank stop with about 11 minutes left in the game.

Matthiesen plays attack, but she couldn’t help but heap praise on her defensive teammates.

“Just watching them play their hearts out and everyone clicking together, our freshman goalie Emily Pond stepping up big time tonight,” she said. “Our defenders were making interceptions, they were blocking the ball, they were doing everything right, they were getting ground balls and I think this was our defense’s best game of the season. They played so good. They clicked. They held us together.”

To start the second half, Evans scored an extra-man free-position goal to give the Lions a 6-4 lead. Spampinato, who led the Lions with four goals, added two more free-position goals for an 8-4 lead with 6:02 left before finishing off the scoring with 41 seconds to go.

“We knew Fallston was going to come out ready to fight tonight,” said Liberty coach Thomas Brandel. “They didn’t want to lose twice in a row. We knew we had to match their energy level and the girls met the challenge, so I couldn’t be prouder.”

The Lions played a tough schedule that included two losses — by a total of three goals — to No. 4 and Carroll County champion Century, which will play for the Class 2A title Wednesday. Thompson said that competition toughened them for the title run.

“We have such a tough in-county schedule that we were like, ‘Okay, we need to fix these couple things against these really good teams and use that to our advantage in the postseason.’ Just playing against those great teams really gives us an advantage in the post-season against other 1A schools, I think,” said Thompson, one of only two Liberty seniors along with defender Abby Ozgar.

The Cougars, who have 13 seniors on the roster, lost only to No. 8 and Class 3A finalist Severna Park and to Harford County rival and No. 14 C. Milton Wright coming into the state title game.

Lambros, a sophomore, led them with three goals against Liberty while Salvatierra, a senior, had a goal and two assists.

Palko said she’s been impressed with the strides her team has made since the beginning of the season.

“The thing that impressed me the most? The fight that they had, what they’ve been able to overcome,” Palko said. “Mental toughness has been one of the big things that we’ve been working toward this year. There were times when we’ve been down in the past and there was, like, a sadness and we’ve been working on overcoming and pushing through. I think this game exemplified that drive, what they’ve been able to accomplish mentally, to not give up… I’m really proud of the growth that they’ve had in their mental toughness.”

Pictured above: Liberty won its second straight Class 1A state girls lacrosse championship Tuesday night with a 9-4 victory over Fallston. The Lions controlled most of the draws to help them build an early three-goal lead and the defense shut out the No. 16 Cougars in the second half.