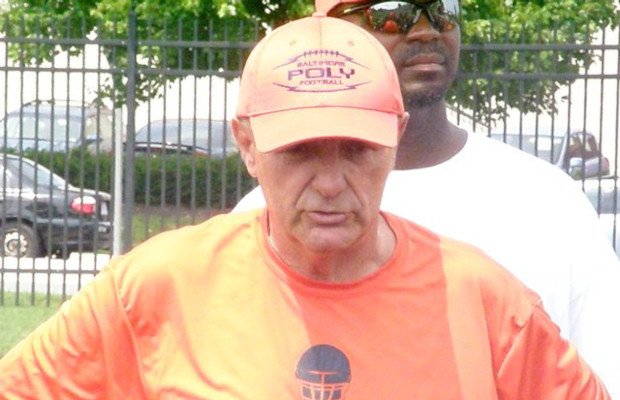 T. Roger Wrenn, a legendary football and baseball coach in Baltimore City at both Patterson High School and Baltimore Polytechnic Institute, who retired in 2011, passed away Monday at the age of 76 after a two year battle with cancer. Varsity Sports Network joins the Baltimore high school sports community, especially those at Patterson and Poly, in mourning this loss.

Wrenn spent the bulk of his career at Patterson, from 1974-2005 before moving to Poly for his final six seasons. During that time he posted a career record of 284-113-2 on the football field and won eight Baltimore City championships and three Maryland Scholastic Association (MSA) titles.

He also spent 29 years as the head coach of the Patterson baseball team where he posted an incredible record of 431-69-2. That was good for the second most wins in Maryland high school baseball history at the time of his retirement.

A 1965 graduate of Prince George’s County’s High Point High School where he played football under two Hall of Fame head coaches — John Voight and Jim Crawford. He played his college football at Frostburg State University and served as the Bobcats team captain in 1967 and 1968.

His first year out of college he began his coaching career as an assistant coach at Fort Hill High School. He also served as an assistant at Howard High and eventually Baltimore City College, before being the named the head coach at Patterson in 1974.

Current Fallston head coach Keith Robison, who began his coaching career under Wrenn at Patterson, before stints as head coach at Overlea and Perry Hall, said Wrenn was tough on young coaches for a reason.

“We are all saddened by the loss of our coach, our mentor and the single greatest influence on our careers as teachers and coaches,” said Robinson. “I say we, because Roger’s coaching tree is vast, and it includes those who once played for him and those who were fortunate enough to teach and coach alongside him.

“To say that Roger Wrenn was “old school” would be an understatement. The very fist day I met him in 1996 as a young and new teacher/coach, there was no doubting his intensity, his sense of purpose and his ability to command a room. Like all the great coaches you read about, Roger had a presence. He prepared all of his assistant coaches to one day become head coaches and run their own programs, and many of us used the lessons we learned from his at both Patterson and Poly, when we went off on our own. It wasn’t until I became a head coach at Overlea in 2002 that I realized just how well prepared I was just from being around Roger so much. To this day, I still ask myself when faced with a challenging situation or decision…”What would Roger do?”

Current Patterson coach Larry Mitchell, who was a student of Wrenn’s at Patterson, spoke of Wrenn’s ability to teach by his example alone.

“Sometimes when you reach a certain status or age in you life, you wonder where would you be or who would you be if your path in life was different,” said Mitchell. “That statement weighs real heavy when it comes to me. I met Coach Wrenn in 1989 as a freshman coming in at Patterson High School and my definition of a great coach is someone you can watch and learn something from just by watching. All the wisdom, all the lessons I learned from this man, on top of all the sit-downs and long conversations, I don’t know where, or have a clue where my path in life would be if it were different. Thanks for planting that seed in me so I can plant the seed in the young women and young men that I have the opportunity to coach and to mentor.”

Derek Maki, who worked with Wrenn on the faculty at Patterson for more than 20 years, before moving on to become an athletic director with several Baltimore County schools, said Wrenn had a gift for molding young coaches.

“He is a man who stands by his principals,” said Maki. “He was a significant role model and teacher for other coaches, as well as an authority figure for his students and athletes. He was a coach who really loved his school. He was loyal to the Blue and White of the Clipper Nation.”

Cedric Berry, a former player of Wrenn’s at Patterson explained just how influential Coach Wrenn was to his players.

“Growing up as a foster child and not knowing who my dad originally was, going to Patterson, Coach Wrenn became my dad,” said Berry. “Those life lessons and what Coach Wrenn taught me, I was able to teach guys I coached throughout the years. He has been a blessing to me and my family.”

One of Wrenn’s own sons, Russell, a long-time coach in Georgia who returned to Baltimore six years ago to become the Athletic Director at Gilman School, knows better than anyone where Berry is coming from.

“As for me, being around “beautiful Patterson High School” (as he always answered the phone) was really just how I grew up. His football and baseball teams and the myriad of coaches that all went on to successfully run their own programs across the state and country were my heroes and friends. He was always pretty blunt with me and my brother Alex that he would miss a lot of our growing up because he knew we were supported and loved and would be OK, but he had a ton of kids in East Baltimore without that luxury, and he was going to spend as much time as was needed to make sure those kids got love, direction, discipline, and a chance.

“Watching him prepare each summer for the next football season (he started the first team meeting each year telling the boys that ‘I have been preparing to coach this team my entire life,’) taught me that kids value organization and accountability. He said in a 1975 or 176 Baltimore Sun article that kids haven’t changed – they want someone to hold them to a high standard and doing so means that you believe in them. I’ve never forgotten that. He was a strict disciplinarian for sure, but he knew that, even if kids objected to that in the moment, deep down they craved it and took pride in the success that the discipline fostered.”

Russell Wrenn was destined to be in athletic leadership because it was practically all he knew.

“Coaching and teaching were really all I knew growing up. My mom was the librarian at Dundalk High School for years and years – and coaches were who I was around always. I can’t count the number of City-County all-star football games and Crown baseball games I was the ball boy for. In 2015, I coached Team Georgia in the Sunbelt Classic. I was fortunate enough to play for Team Maryland in 1996, but I told everyone in Oklahoma that I remembered the Sunbelt when it was in Florida, as I was the bat boy for the first Maryland team that ever went, back in the late 80’s. Having access to all the great football and baseball coaches around the state through dad’s involvement in the different coaching professional organizations really opened up the world of this profession for me.

Obviously, Gilman is a bit removed from 100 Kane Street in East Baltimore, but dad always said that each school (and each kid) has challenges, they are just different challenges sometimes. I’ve never forgotten that. You never really know what any kid or family is dealing with until you invest in them individually.”