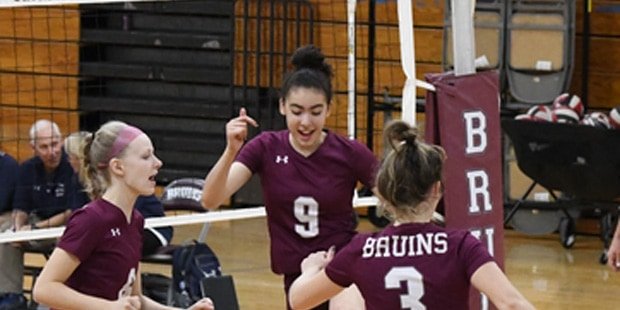 Bruin setter, who will play in college at Lehigh, places team success above individual glory

At the first practice of the 2018 volleyball season, Broadneck coach Tracey Regalbuto set seven piles of papers on a table, each sheet listing the expectations for one position on the court. Regalbuto then asked each player to select the paper for the starting position she wanted.

“Makena was the only person who grabbed all seven papers and said, ‘I want to know what it takes to start at all positions.’ In that moment, I looked at my assistant coach and I said, ‘Yeah, she’s going to be team captain this year. I don’t care that she’s a sophomore,’” Regalbuto said. 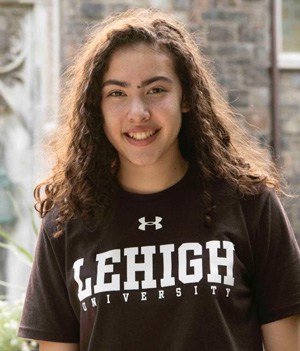 McKena Smith still hopes to return to the court with her Broadneck teammates some time this spring, but if that is not possible she is preparing for her college volleyball career, which will get underway next fall at Lehigh University.

As a sophomore, Smith emerged as one of the top setters in the Baltimore area. By her junior year, she was one of the best setters in the history of Baltimore high school volleyball. Had COVID-19 not canceled her senior season this fall, she would have been a Player of the Year candidate.

In her sophomore and junior years, she dished out 1,258 assists and also had 162 kills and 59 blocks as the Bruins went 30-7. Next fall, she’ll play for Lehigh.

When Smith arrived at Broadneck, she had been a setter for only a couple of years. When she was 12, playing club with 14 year olds at the Bay Area Volleyball Academy, she decided that she wanted to switch from middle/right side hitter to setter.

“I guess it’s because you get to do everything,” Smith said. “You get to do defense, you get to block, and then you also have another level of leadership on the court. You’re commanding the offense and you get way more touches on the ball which I guess that’s being selfish, but (she laughs) I just always like being involved and helping my teammates and commanding the court.”

The club coach Smith first approached was Regalbuto, who encouraged her to make the switch. Smith gives her coach credit “for making me everything I am today.”

But Regalbuto saw Smith’s potential even then.

“She’s extremely fast and I feel like what sets her apart from most setters now is her ability to get to most balls with her hands,” Regalbuto said. “When she was 12, she played on my club team and just her energy on the court and her positivity. She was always so encouraging and that’s just a good quality to have as a person who is in the middle of the play. They don’t get to start a play, they don’t get to end a play and you have to have a good temperament to be able to handle that emotionally. She was always such a good teammate that that was a good role for her and her athleticism and speed helped her excel in that position.”

Emma Quandt, who played with her for three years at Broadneck, said Smith not only led her teammates, she listened to them and trusted them.

“What makes her such a good leader is she takes feedback from everyone on the team. She’s not just saying,’Ok, you guys have to listen to me.’ It’s really a collective thing as a team. She includes everyone. She makes sure everyone is heard. She’s not going to get mad when you make a mistake. She’s someone you can trust and that builds a very strong team dynamic which is something we had my senior year,” said Quandt, now a freshman playing at Ashland University in Ohio.

That year, 2019, the 6-foot Smith led the Bruins to the Anne Arundel County championship and to the Class 4A state final as a junior.

In the state final, she dished out 26 assists and had a couple of kills as the No. 2 Bruins fell in a five-set match to county rival and No. 1 Arundel.

A few weeks earlier, Smith contributed 38 assists as the Bruins upset Arundel in the county championship. She also had 12 digs including a critical save in the third set. The teams split the first two sets and the third was tied at 23 when Smith’s pancake prevented an Arundel point and sparked the Bruins to a 25-23 win. They went on to finish off the match with a 25-22 fourth-set win, dealing the Wildcats their only loss of the season.

“No matter where she is on the court,” Arundel coach Ashley Yuscavage said, “she’s able to be effective not only as a setter but also as strong defender, a consistent server, a really good blocker and an offensive threat herself, so if she’s going to touch the ball, she’s going to do something good with it. She’s good at all elements of the game and that makes her more versatile as a setter.”

While COVID-19 held the Bruins to just a handful of fall practices, Smith worked out every day and had a few clinics with her club team, Metro Volleyball Club of D.C. She also read books and listened to podcasts about leadership. To Smith, honing leadership skills is just as important as sharpening her skills as a setter.

“Setters aren’t just the people who have the best hands. I feel like they’re the people who can motivate their team and command the most out of their teammates at all times,” Smith, 17, said. “It’s easy to do setter training and get good hands, but not everyone is capable of expecting more out of your teammates and really driving it out of them. I feel like the biggest thing about being a setter is more of a mindset and mentality.”

She’s doing everything she can to be even better whether she plays next for the Bruins in a short spring season or for Lehigh next fall.

“At first [missing the season because of COVID] was tough, but at the end of the day I’m looking forward to college volleyball. I was really looking forward to my senior year and hopefully going back to states. I really miss going to practices with my teammates, but I’m just keeping a positive mindset and being optimistic, keeping my fingers crossed that we’ll have a season, but if we don’t, I have gotten a lot better and grown as a person this year. I’m just looking forward to getting back into the game that I love.”