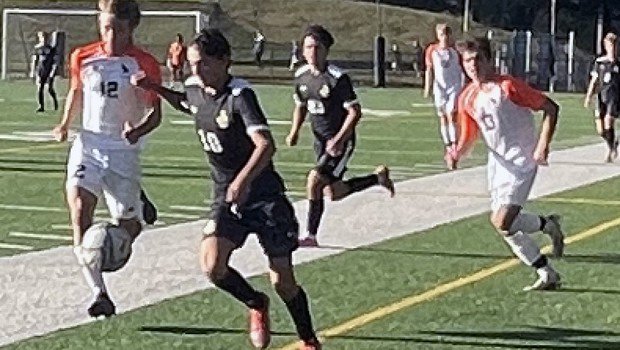 No. 1 McDonogh scores three times in the final 20 minutes to turn back a stubborn John Carroll squad

With a long regular season heading towards a conclusion and everybody fighting for a better playoff seed, the top soccer teams in the MIAA A Conference are being forced to dig a little deeper to pick up critical points in the standings.

(From left) Seth Malek, Jacob Murrell and Ethan Glaser each scored a goal in McDonogh’s 3-0 win at John Carroll.

That was certainly the case on Wednesday in Bel Air as No. 1 McDonogh visited No. 6 John Carroll. The visiting Eagles hold a narrow lead on No. 2 Calvert Hall in the chase for the top seed for the playoffs and they wanted to keep it that way. John Carroll wanted to solidify its hold on third place and gain some momentum and heading into the post-season.

When the final horn sounded on McDonogh’s 3-0 victory, both clubs may have achieved their objectives.

Although the final score may suggest another one-sided affair for the Eagles, the game was scoreless with 20 minutes to go and John Carroll created enough quality opportunities to leave with confidence they could get a better result should the two teams meet again.

The Eagles, on the other hand, showed they have the poise to persevere even when they are not playing at their best.

McDonogh finally broke on top with 18:45 to play on a set piece. On a corner from the right side, sophomore Kobe Keomany hit a long ball to the far side of box. Junior Bryant Mayer headed it back toward the center of the goal where junior Ethan Glaser headed past John Carroll freshman goalkeeper Amir Smith.

The Patriots countered with a couple of near misses, in the next minute, but the equalizer did not come.

McDonogh made it 2-0 with just under nine minutes left when senior Jacob Murrell and junior Seth Malek each got behind the defense and battled Smith for a 50-50 ball. In the tussle, Smith fell to the turf and Malek was left all alone with an open goal. He took two dribbles and rolled a shot inside the left post.

Murrell, the league’s leading scorer, got the final Eagle goal, with 4:30 left. Aiden Ellis fed him the ball on the left side and Murrell crushed a shot off the right post which caromed off the left post before bounding across the goal line.

“We’re on the road; they’re well coached, we knew it was going to be a struggle today,” said Quaranta. “They were very well organized, making it difficult for us and minimizing our space. You have to grind, you have to find a way to score, then you can settle in a little bit and open up that lead. That’s how you have to win games in our league against good teams.”

And, Quaranta definitely categorizes John Carroll as a top team.

“John Carroll has proven this year that they are one of the best teams in the league. They are sitting in third place, a deserved third place and they can beat anybody in our entire conference.”

As for John Carroll coach Jim Fendryk, he believes his young team is making the strides necessary to be considered among the MIAA’s elite.

“When we assess how we perform in games, one of the biggest markers I look through are chances created,” said Fendryk. “Right around the time they scored, we looked at ourselves and said a fair result would be a 2-2 tie. We both created a good number of opportunities. If we take one of those early ones, particularly the two good ones we had in the first five minutes of the game, it could have changed the tide a little bit.”

Fendryk said his team came in with a game plan to control space and look to score on counter attacks. It worked most of the afternoon and the Patriots had the high-powered Eagles visibly frustrated early in the second half. However, as Fendryk pointed out, if you crack even once, McDonogh is always ready to pounce.

“You just can’t switch off on a good team like this,” Fendryk explained. “The moment you switch off, they are going to punish you for it and that’s exactly what happened on the corner.”

With the victory, McDonogh (17-2 overall) improved to 15-2 in the A Conference where they maintained their two point lead over Calvert Hall, which won at St. Paul’s on Monday, 5-1.

The top two seeds get first round byes and the third and fourth seeds will host quarterfinal games.

Pictured above: McDonogh’s Bryant Mayer (left) pursues John Carroll’s Joshua Petty as he works the ball up the sideline.