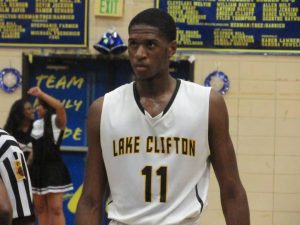 Armon Harried was clutch for Lake Clifton Wednesday. The senior guard scored the winning basket with 5.6 seconds left in regulation, lifting the eighth-ranked Lakers to a 62-60 victory over Dunbar in a Class 1A North Region boys basketball semifinal in Baltimore City.

Armon Harried knows the next game he plays for Lake Clifton High boys basketball could be his last. He wants to go out on top.

Harried’s basket with 5.6 seconds remaining in regulation lifted the No. 8 Lakers to a 62-60 victory over Dunbar in the Class 1A North Region Section I final in east Baltimore.

The Lakers (21-4 overall) will host Randallstown in the region final Friday. Randallstown claimed the Section II crown with a victory at Pikesville Wednesday.

Lake Clifton, which won the 2A state title last year, is a step closer to returning to the Xfinity Center, thanks to Harried, who got an inbound pass, drove left and hit a bank shot layup through traffic to put the Lakers up for good.

Dunbar had one final chance as Malik McCormick hurriedly dribbled the ball up the middle of the floor. He heaved a floater from the 3-point line that bounced off the backboard and rattled off the front of the rim as time expired, ending the Poets’ reign as 1A state champs.

The Lakers beat the Poets, 69-56, back in December. Lake Clifton coach Herman “Tree” Harried cautioned his team that the rematch Wednesday would be much tougher.

Dunbar guards Desean Jones, Deron Hunt and McCormick were able to penetrate Lake Clifton’s defense early to find Jalen Scott for easy buckets inside. Scott provided a crucial post presence for the Poets in the first half, finishing the game with 12 points and a game-high 10 rebounds.

The Lakers rallied back from an early 15-9 deficit, trailing only 29-28 at halftime. The game was tight throughout the second half.

With game tied at 60, Lake Clifton called timeout with 10 seconds left in regulation. Armon Harried, a three-year starter for his father, helped keep Lake Clifton’s bid alive to become the first team to a win state championship in all four classifications.

“He’s tough. He’s gonna play hard, but if you come to practice you’ll see how hard he works in practice,” said Coach Harried said of his youngest son. “All the stuff you see him doing on the court – it’s work done prior to that, and he prepares himself for these games. All the other guys do as well.”

Michael Gray contributed with 15 points, four rebounds and two assists, while Keith Johnson added 12 points and eight boards for the Lakers. McCormick  scored a team-high 13 points and had two rebounds for Dunbar (16-9), and Deron Hunt and Sammy Davis each scored 10 and combined for six rebounds.

“I felt as though my guys played their heart out, they left everything out there and we came up short,” Dunbar coach Diego Jones said. “A lot of plays, we had opportunities to make and unfortunately we wasn’t able to. Free throws down the stretch, we missed layup opportunities, we didn’t execute…We made plays more so that hurt us, and helped them [Lake Clifton].”