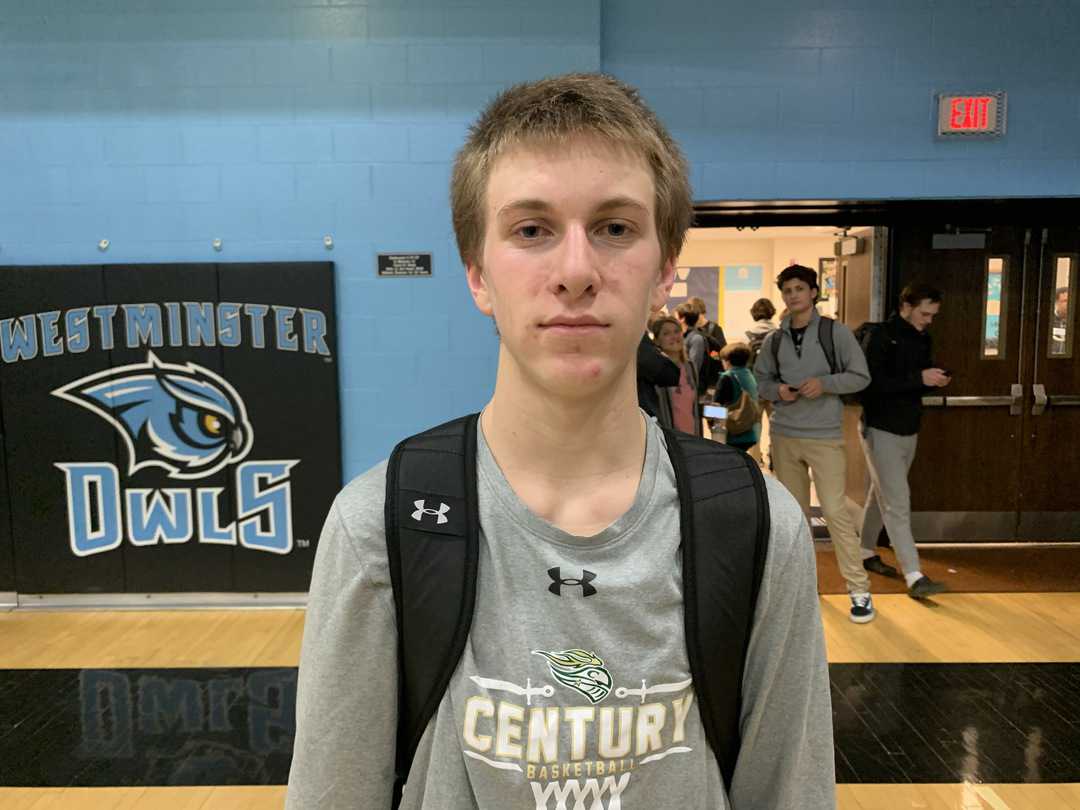 Noah Riley had a sizzling hand for Century boys basketball Tuesday evening. The junior guard scored 23 points, including five 3-pointers as the Knights defeated Westminster to create a first-place tie in the Carroll County Athletic League.

It was clear to anybody watching the battle for supremacy in Carroll County boys basketball Tuesday night that Noah Riley was the star of Century’s 64-52 triumph over Westminster.

After all, the junior guard poured in a game-high 23 points and led the Knights’ shooting barrage (11 for 25, 44-percent) from behind the arc to key the victory.

Even so, Century coach George Wunder was quick to mention the hard work that might have gone unnoticed by Spencer Copley, a 6-foot-2 senior forward who helped to hold Westminster forward Nico Graham to just six points.

“Nico plays hard and Spencer did not back down,” the coach said. “Our players recognize what Spencer means to the team. He’s our unsung hero.”

With Graham slowed down and in foul trouble early, the Owls were lacking a reliable option inside like the one who scored 15 points in a 66-60 win over Manchester Valley last week.

And with the way the Knights were pumping in 3’s, Westminster (13-4, 8-1 league) needed every point it could muster.

The convincing win avenged a 52-46 setback to the Owls early last month in Sykesville and put the teams in a dead heat atop the Carroll County Athletic League standings.

“We have zero excuses,” Westminster coach Brett Kanther said. “We weren’t winning that game no matter what foul trouble we were in. When they shoot 3’s that deep, it makes it tough. We couldn’t stay in from of them.”

The rivals, who would share the county title if they both win their remaining games, traded leads throughout the first quarter and deep into the second period.

After the Owls went ahead, 23-19, on senior guard Tyler Buberl’s nice turnaround jumper, Century (13-3, 9-1) went on a 10-2 tear to take a 29-25 advantage with all of its  points coming from senior guard Justin Wunder on four free throws and two 3-pointers.

“That really gave us a spark,” Riley said.

The Knights would never trail again, although Westminster managed to get within 43-41 late in the third quarter before Riley buried a clutch 3 to ignite a 21-4 spree that lasted almost the entire final period.

He would add his fourth and fifth 3’s in the sequence and junior guard Colby Owings also hit one as Century’s lead blossomed to 64-45 before the Owls could stop the bleeding.

“We’re a good shooting team,” Riley said. “As long as we were making them, we were going to keep shooting.”

George Wunder said that the Knights have several scoring sources.

“Whether it’s Justin, Colby or Noah, we have a multitude of guys who can shoot 3’s,” he said. “And we have guys who are willing to make the xtra pass (to an open teammate).”

And, when they broke the press-and-trap defense that Kanther employed to try to get back in the game in the second half, the Knights found more open looks at the basket.

“It’s a little bit of Russian roulette when you try that,” Kanther said. “They make you pay if they beat it.”

And beat it they did, although the Owls did manage to get a couple of turnovers late in the contest.

There just weren’t enough of them to turn things around.