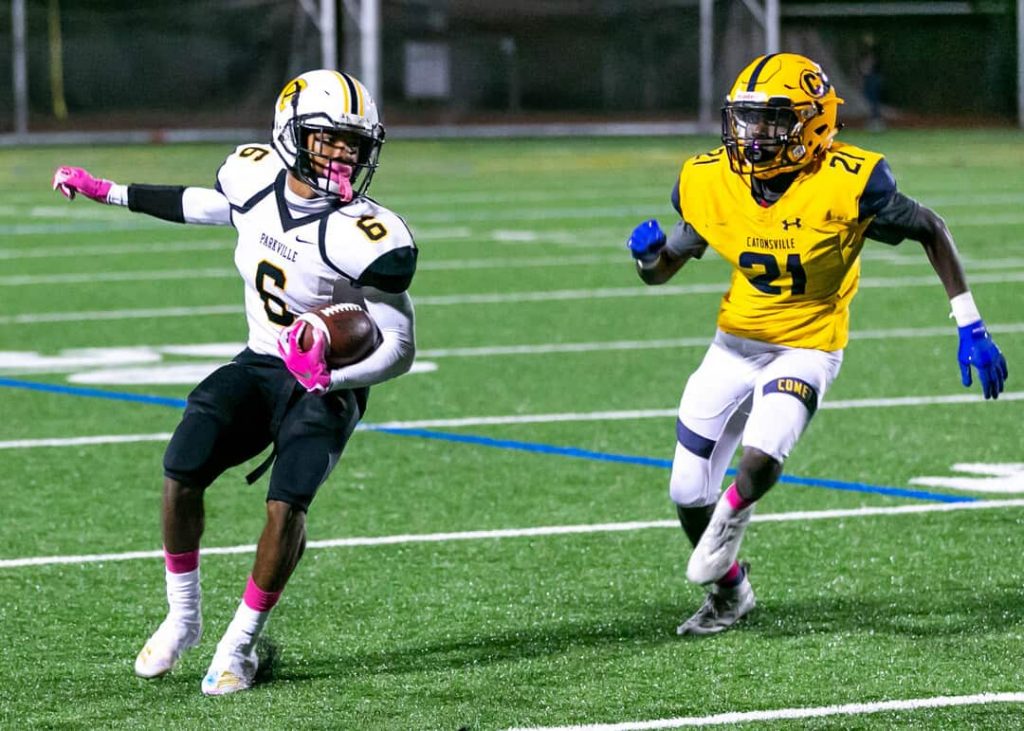 Parkville’s Da’Vaughn Curbeam (6) heads upfield after making a catch as Catonsville’s Josh Williams pursues during Friday evening’s Baltimore County football contest. Curbeam had a touchdown catch as the Knights ran their mark to 5-0 with a 34-14 road decision over the previously undefeated Comets. (photo – Sports Majors)

Parkville High football coach Justin Payne gets concern with road games because he feels his team plays flat. That wasn’t a problem Friday.

The Knights led wire-to-wire, prevailing 34-14 over Catonsville in a Baltimore County 4A Division matchup of undefeated squads.

Parkville amassed 371 yards and four touchdowns on the ground and the defense forced three turnovers to remain unbeaten at 5-0. The Knights (2-0 in 4A) have the inside the track to the Baltimore County 4A crown.

“We just had to buckle down and get ourselves together. Sometimes, we come out flat when we play away.” Payne said. “This is a team that really likes each other and they have brought in.”

Senior quarterback Kevin Smith rushed for 101 yards and two touchdowns and threw for another. Arriq Redd added 116 yards and 2 touchdowns and Da’Vaughn Curbeam had 88 yards on the ground and a touchdown reception.

Payne had high praise for Smith.

Parkville scored first when White capped off a 5-play, 37-yard drive with a 3-yard scamper in second quarter. The next two Catonsville drives stalled on a fumble that was recovered by Parkville’s Noah Hambrick and a turnover on downs which the Knights took over at their own 38.

Five plays later, Smith connected with Curbeam in the middle of the end zone for a 11-yard touchdown reception, extending the Knight lead to 14-0 with 21.6 seconds left in the first half. The Comets (4-1, 1-1) responded out of halftime, taking their first possession 62 yards in 12 plays as Anthony Fliggins plowed into the end zone on a 1-yard touchdown, cutting the Knights’ lead in half.

“After halftime I told the guys we had to stay disciplined, we knew that Catonsville was going to come back and fight and we had to be ready,” Smith said.

Parkville answered with an 8-play, 80-yard drive that started in the third quarter and ended at the start of fourth, with Smith scoring from a yard. Catonsville went 3-and-out on the ensuing drive, and Redd bullied his way into the end zone from 10 yards, giving Parkville a 27-7 lead.

Comet quarterback Jacob Diluca connected with Ricky Sears for a 35-yard touchdown, pulling the hosts to 27-14, but Redd finished off a short drive for the Knights with a 9-yard touchdown run to put the game away.

“Going against the triple option is tough, it’s tough at every level and especially against a team that runs it well and they’ve been running it well for along time,”Catonsville coach Jaren Maybin said. “I think Parkville is a solid team and we’ve got a lot of learning and getting better to do, but I’m proud of the product that we put on the field tonight.”