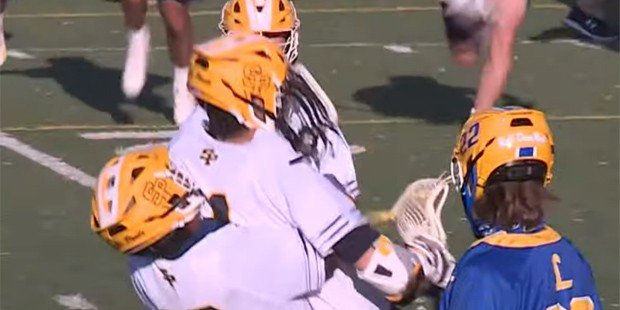 Crusaders knock off Loyola with an overtime goal

St. Paul’s got off the deck more than once on Tuesday.

The Crusaders battled back from an early 4-0 hole with an 8-2 run and reversed some late momentum by visiting Loyola with an overtime goal from junior Braeden Klausner, to knock off the Dons, 9-8, in a thrilling MIAA A Conference lacrosse showdown in Brooklandville.

Daniel Davis won the draw for St. Paul’s to start overtime, but a turnover gave the Dons a crack at the victory. St. Paul’s goalkeeper Max Watkinson kept the Crusies alive by stopping a low-blast by Loyola’s Henry Tolker who was wide open on the right side of the cage. Once St. Paul’s regained possession, however, the Crusaders worked deliberately for the winning score. Facing a double team, Noah Chizmar scooped the ball to Klausner, who slid into some open space on the left side and bounced in the game winner.

The Crusaders had an 8-6 lead as the fourth quarter moved under four minutes, but Matt Rice made a big run after a nifty scoop on the defensive end for Loyola, finding Mason Cook for a score with 3:11 remaining to bring the Dons within one. Charlie Koras then ripped a shot into the net, with 1:44 remaining to even things at eight. Loyola nearly won the contest in regulation, but Watkinson bailed out the Crusaders with a brilliant stop.

Loyola staked itself to a 1-0 leader after one quarter on an EMO tally by Matt Burnan, and stretched that lead to 4-0 with five minutes to play in the first half. Brunan scored again to start the second quarter and AJ Larkin initiated a fast-break before delivering and assist to Kevin Tucker with 9:25 left in the opening half. Moments later, the Dons completed their 4-0 start with an unassisted score by Hayden Celio.

St. Paul’s, however, finally got on the board with a Chizmar score, starting a 4-0 St. Paul’s run to send the game to halftime tied at four. Chizmar also scored the Crusaders second goal, on a dish from Grady O’Day, while Kabe Clark netted an extra-man tally and Davis, who spearheaded the Crusaders rally from the X, won a face-off and scored on a fast-break for the tying goal.

The clubs exchanged scores to start the third quarter, with Cook giving Loyola a 5-4 advantage and Michael Smyth evening it up for the Crusaders. From there, St. Paul’s took its first lead of the day on an extra-man tally by O’Day, assisted by Chizmar. Klausner followed with his first score of the day and St. Paul’s led, 7-5, after three quarters.

An extra-man goal by Loyola’s Hayden Miller pulled the Dons back within one at the start of the fourth quarter, but an unassisted score by Smyth re-established the Crusaders’ two-goal advantage.

Both teams now sit at 2-2, both overall and in the conference

Pictured above: St. Paul’s Braeden Klausner (#4) is mobbed by his teammates after his overtime goal gave the Crusaders a thrilling 9-8 win over Loyola.