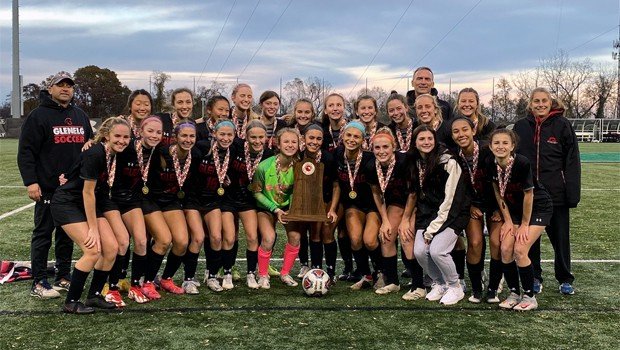 Stephanie Lathrop has scored goals in bunches this season for Glenelg High.

The prolific sophomore midfielder/forward’s 28th and final tally — and eighth game-winner — of the 2021 campaign may be the most meaningful of what has already been a standout career for the No. 14 Gladiators.

Her final strike came in a 1-1 stalemate with Hereford in the Class 2A state title game with 17:05 remaining in regulation after Lathrop swiped ball from the Bulls’ backline, put two touches on the ball and hit a lefty shot that sizzled under the near post and into the corner.

“I took my space and hit it with my left foot,” said Lathrop, who smashed the previous program record for goals in a season (16) and has produced a whopping 36 career goals. “It was a feeling that you just can’t describe.”

“Stephanie works hard,” he said. “And it shows on the field.”

Hereford senior net-minder Kayla Nieberlein had no chance to make the save, and was in a similar predicament when senior midfielder/forward Brianna Werner nailed a 25-yard free kick to give the Gladiators (15-2 overall) a 1-0 lead in the 24th minute.

The Bulls (13-5) drew even when junior midfielder Lauren Omer sliced in a penalty kick with 7:27 left in the first half after a penalty in the box. It was her 10th goal of the season.

Leading scorer, junior striker Shari Atkins, and the rest of the Bulls were bottled up by Glenelg’s defense.

“All of us play defense as a team,” Wener said. “By the second half we found out how to get around them with short passes. We had to turn our nerves into a good thing.”

Nieberlein said that she may have come out too early off her line on Werner’s drive and was wary of Lathrop’s penchant for finding the net.

“I told the backline to watch out for (Lathrop),” Nieberlein said.

Werner said that she was aiming for the corner.

“But I also wanted to put it, if it didn’t go in, where we would still make a play on it,” Werner said about scoring her eighth goal of the season.

The 6-foot Nieberlein, who played junior varsity soccer as a freshman and then focused on basketball only as a sophomore and junior, wasn’t going to play this season either until Hereford coach Brad Duvall recruited her before the first game of the season after an injury thinned the goalie ranks.

“I said. ‘Kayla we need you,’” Duvall said, noting she would back up fellow senior Tessa Janney.

Eventually, Nieberlein took over as a starter as the Bulls (13-5) racked up six straight wins before facing the Howard County champs.

The Gladiators, though, were a tough bunch to handle, and Duvall knew what the Bulls were up against in Lathrop and Werner.

While earning the program’s seventh state soccer banner and first since 2008, Glenelg became the first school in history to win field hockey, volleyball and soccer crowns in the same season.

The field hockey team also beat Hereford in a final and the Gladiators’ volleyball squad dismissed the Bulls in the semifinal round.