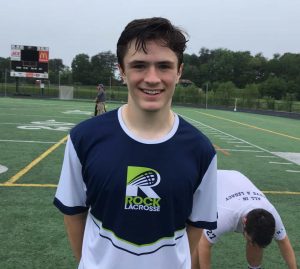 Colin Kelley was solid in goal for Marriotts Ridge Saturday, stopping 12 shots in the Mustangs’ 2A state semifinal victory over Kent Island at Northeast. The Howard County school will play No. 8 Hereford for the state title Tuesday at Stevenson University.

Marriotts Ridge High junior goalie Colin Kelley was good enough to make 12 saves in an 11-5 triumph over Kent Island on Saturday — and wise enough to credit his defense for helping him to keep the Buccaneers under wraps for most of the Class 2A boys’ lacrosse state semifinal at rainy Northeast in Pasadena.

Kent Island fared about as well as almost any other foe facing Kelley and the imposing backline this season, considering that No. 14 Mustangs have allowed only an average of five goals per game this spring.
The plan they implemented against Kent Island was simple and direct.
“We were shutting off No. 21 (Kent Island senior midfielder Brandon Galloway) and trying to get the offense going through some other people,” Kelley said. “And that worked out really well for us. Some of our poles stepped up and really got on their hands. I had the easy job of just stopping the ball.”
Kelley added that senior midfielder Luke Ingersoll and junior running mate Matt Hendershot did an “awesome” of being part of the group that held Galloway to a pair of goals.
“He’s a great player — all props to him,” Kelley said about Galloway.
Junior longstick Ricky Fedorchak also shadowed Galloway while sophomore Andrew Page drew another Buccaneer sniper, Ricky Tubman. Lefty attackman Sean Mooney was another Kent Island shooter the No. 14 Mustangs (17-2 overall) kept the clamps on throughout the contest.
By and large, the pressure brought by the backline was successful in either spoiling promising scoring chances or forcing bad shots.
And, when all else failed, Kelley, a Mercer University commit, was there to wall off the goal.
“He’s everything you would want in a goalie,” Marriotts Ridge coach Tony Incontrera said about his netminder. “He’s excellent.”
The Mustangs’ offense was a terrific complement to the defense, producing a 5-0 run that bridged the second and third quarters on goals by two goals each by senior attackman Logan Frank and senior midfielder Brett Gladstone and one by freshman attackman Charlie Reynolds to widen a 3-2 advantage to 8-2 in the first minute of the second half.
Kent Island offered some brief resistance when Tubman and Galloway countered with goals late in the third period before Reynolds restored a five-goal cushion early in the final period.
Mooney brought the Buccaneers a little closer until goals by Reynolds and Frank sealed the deal with under four minutes remaining in regulation.
“We just didn’t adjust very well to their defense,” Kent Island coach Bobby Woolley said. “We’re used to the big stage in lacrosse and football, but we froze a little bit. We didn’t respond well, and everybody on the team would say we faced a good goalie.”
It didn’t help the Buccaneers any that Marriotts Ridge sophomore faceoff specialist Andrew Luciano had a banner day at the faceoff X by helping his team win 13 of the game’s 19 draws.
The Mustangs will need to keep up their fine play in order to top No. 8 Hereford, their opponent in the Class 3A title game next week.
After all, the Bulls own nine state championships and will be seeking their first crown since 2013 while Marriotts Ridge is hoping to claim its first state banner.
“Hereford is a great team, with a great program and a great history,” Incontrera said.
CLASS 2A BOYS STATE LACROSSE SEMIFINAL
AT NORTHEAST
No. 14 MARRIOTTS RIDGE 11, KENT ISLAND 5
KI    1  1  2  1 — 5
MR  2  5  1  2 — 11
Goals: KI-Brandon Galloway 2, Harrison Smith, Sean Mooney, Ricky Tubman; MR-Charlie Reynolds 3, Logan Frank 4, Brett Gladstone 2, Peter Geier, Ellis Gloyd.
Assists: KI—Sean Mooney, Cole Kratovil, Brendan Chambliss; MR-Troy Hettinger 3, Ellis Gloyd 2, Brett Gladstone 2, Peter Geier, Luke Ingersoll.
Saves: KI-Stu Sykes 8; MR-Colin Kelley 12.