Keith Robinson is returning to sidelines 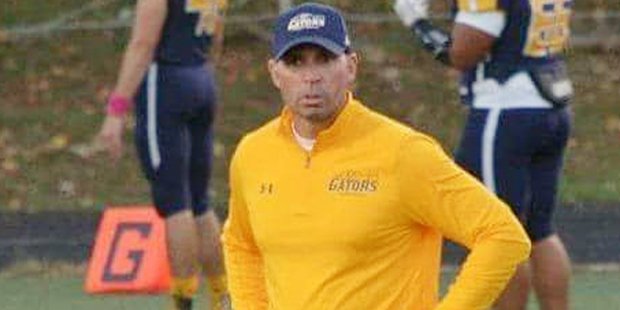 When Keith Robinson stepped down as football coach at Perry Hall High School following the 2018 season, he was a little burned out and longing to spend more time with his family. He always knew, however, that he would return to the sidelines one day.

That day has arrived as Robinson accepted an offer to be the new head coach at Fallston High School in Harford County this week.

Robinson, a product of the very successful coaching tree of Roger Wrenn, the legendary Baltimore City coach who roamed the sidelines at both Patterson and Poly for a span of nearly four decades, was a coach for 17 years in Baltimore County, starting with six at Overlea and then 11 very successful campaigns at Perry Hall, posting a career record of 121-58. In addition, his teams have never suffered a losing season.

Robinson expected to stay off the sidelines for at least four years, to watch his son’s high school football career at Fallston. During his time away there was an opportunity for many things that the demands of being a head football coach did not allow. There were family vacations in August, many days playing golf, and frequent trips to the gym. The family even got a new puppy, but, ultimately, the allure of coaching remained strong and he decided to speed up the timetable for his return.

“My initial thought was that I would enjoy being a dad in the stands and just watch for four years, knowing that I would have opportunities to return to the sidelines after my son graduated from high school,” said Robinson. “Well, after one or two games in the stands I realized that there was no way I could just sit and watch for four years. I guess instinct just took over; I knew then, that while the flame had extinguished temporarily, the pilot light was still lit.”

That flame grew warmer when Jimmy Grant, who has coached at Fallston for more than 20 years and has served as the Cougars head coach since 2016, offered an invitation to Robinson to join his staff in 2019. Initially, Robinson resisted the urge to jump back in, but after the season agreed to become the Cougars JV coach for the 2020 season. Unfortunately, due to COVID-19, that season never took place and the Upper Chesapeake Bay Athletic Conference of which Fallston is a member, did not elect to have a spring football season.

In February, Grant decided to step aside as the Cougars’ head coach, opening the door for Robinson to replace him.

“Coach Grant stepped down in February and I knew immediately that I couldn’t let the opportunity to coach in my own community slip by,” said Robinson who’s a Fallston resident. “Fortunately for me and for the program, Coach Grant, who has been coaching and teaching at Fallston for well over 20 years, will remain on staff and make my transition much easier. He’s an FHS alum and he cares deeply about the success of the program and the student athletes there.”

In many ways, Robinson will have his cake and eat it to, as he will get an even closer view of the remainder of his son Mickey’s high school football career as his head coach. Mickey Robinson will be a junior in the fall, while his daughter Courtney, who is a freshman on the Cougars’ girls JV lacrosse team this spring, will also see a lot of dad around campus.

“I certainly look forward to coaching him and many of his teammates who I’ve know since they were little kids,” stated Robinson. “They are going to get to know a very different version of me that they have yet to experience.”

With regard to his expectations, Robinson believes he can bring the Cougars success on the gridiron.

“I know we can win at Fallston. I am very confident that the athletes and their families will buy into the process that we will lay out before them and the expectations that we will set. I will rely on the same formula for success that we used at Perry Hall and Overlea… Preparation and hard work in the off-season, and attention to little things that we can control in our day to day lives. If we do that collectively, the big things will come.

“While I realize that many of the kids that grow up in Fallston end up attending private schools for high school, it’s really nothing new for me. We dealt with that same dynamic at Perry Hall. The best recruiting tool for kids and parents is success – winning and helping young men with college potential to play at the next level.”

One thing is for sure, Fallston football fans will be entertained. Robinson employs an uptempo offense that rarely huddles, looking to snap the ball as quickly as possible and subdue the opponent with an offensive onslaught.

“If it ain’t broke, don’t fix it,” answered Robinson when asked if he would run the same offense in the UCBAC. “We averaged over 35 points a game over my final nine seasons (we went exclusively up tempo, no huddle in 2010) at Perry Hall and we played an exciting style of football. I think that style attracts players, it’s exciting for the fans and I look forward to silencing the critics who think we won’t be able to run that style here.”