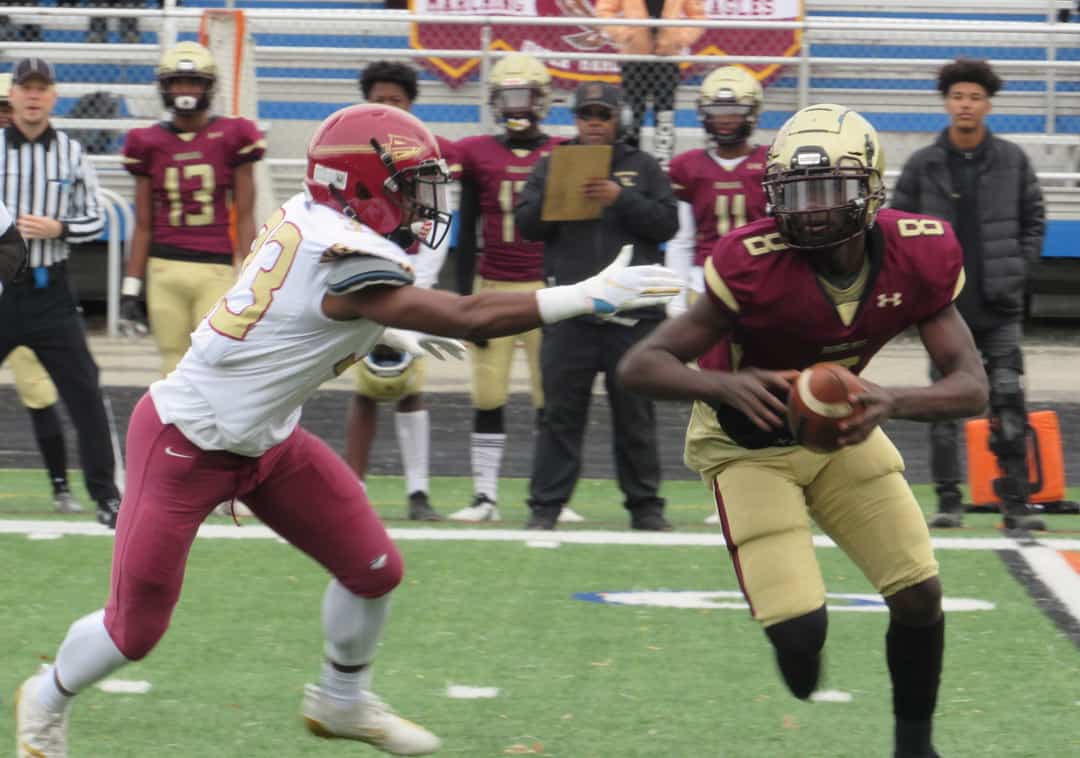 Douglass-Prince George’s quarterback Devon Harding (right) tries to escape from New Town’s Nykholas Hutchinson during the first half of Saturday’s Class 2A state football quarterfinal contest at Henry A. Wise in Upper Marlboro. The Titans kept the Eagles out of the end zone before getting a field goal to end Douglass’ perfect season and advance to next weekend’s state semifinals.

New Town High’s Samuel Okezie-imo admitted he lost faith at the end of regulation of Saturday’s Class 2A state football quarterfinal with Prince George’s County’s Douglass. Running onto the field to set up for a potential game-winning field goal, Okezie-imo and his Titan teammates frustratingly went back to the sidelines after officials ruled time had ran out.

During regulation, Okezie-imo watched his Titan defensive mates make out like Houdini. He wasn’t sure if the so-called “Football Gods,” would be as kind to the Titans in overtime.

Okezie-imo got another opportunity, and New Town is headed back to the 2A state Final Four. His 19-yard field goal lifted the Titans to a 3-0 victory over the previously undefeated Eagles at Henry A. Wise in Upper Marlboro.

New Town (9-3 overall) will return to Southern Prince George’s County, this time Oxon Hill for a state semifinal matchup against Potomac Thanksgiving weekend. Last season, the Titans lost to Glenelg in the state semifinal round.

The Owings Mills school is again on the cusp of a trip to Navy-Marine Corps Memorial Stadium for the state championship, thanks to Okezie-imo, who was lifted by his teammates after keeping New Town’s season alive.

“Before the game, my coach told me to breathe and take it easy,” said Okezie-imo, a senior. “This is you doing your job…doing what you do best. I did my job.”

It was easy compared to what he went through during Friday’s practice.

Okezie-imo appeared to have a chip shot with New Town at the Eagles’ 2 after quarterback Brian Williams spiked the ball with two seconds left. But the game officials ruled Williams’ knee was on the ground when he received the snap, which ran off the remaining seconds.

It was a frustrating end to New Town’s best offensive series Saturday that started at Douglass’ 1, thanks to a Herculean effort from its defense. The Titans denied Douglass (11-1) on four drives inside their 6-yard line, the last ending with a fumble recovery from junior linemen Tyler Booker at the 1 with 2 minutes, 38 seconds remaining in regulation.

“I tell my guys all the time we have to act like our backs are against knives,” said New Town senior linebacker Gerrell Johnson, who had a fumble recovery.

“We have a lot of new players in the program and they’ve helped us out a lot,” said Titans senior strong safety Darius Broach. “We’re maintaining the standard of being the best defense in the state.”

Broach surged through an opening to bring down Douglass quarterback Devin Harding on 4th-and-goal from the Titans’ 1 with 7:32 left in the game. New Town stripped Harding on the Eagles’ next possession, and Johnson, an UMASS commit, recovered.

The Titans defense was against the wall after Malik Pettaway intercepted Williams and returned the ball to New Town’s 8 with 3:17 to play. The Eagles reached the 1 before a false start penalty left them with 3rd-and-goal from the 6. Harding mishandled the snap and Booker came up with the ball.

“We’re not the biggest guys but those 11 kids are very physical,” said Savage, whose team has allowed one touchdown in the last 17 quarters. “They’re detail-oriented and believe in each other. Everybody does their job and take care of the man next to them.”

Thanks to three Williams completions, the latter a 36-yarder to Tayon Kane, with a personal foul on Douglass added on, New Town was at the Eagles’ 5 with 21 seconds left in regulation. Zavion Woodard was stopped short of the goal line, and with no timeouts, Williams spiked the ball with two seconds.

After words of encouragement from teammate Christopher Maddox, Okezie-imo, with kicking stand in hand, was ready. Then, the head referee’s right hand went up and down in the air, signaling time had expired.

It was quickly restored as New Town’s defense continued bashing Douglass, the No. 1 overall seed in 2A, to start overtime. Tim Welsh and Raiheem Olalekan combine to sack Harding, and the Eagles were 25 yards away from the end zone (possession started at 10) when the drive ended.

Woodard started New Town’s overtime possession with a two-yard run. He was stopped for no gain on 2nd down, but another personal foul penalty on Douglass, placed the ball at the Eagles’ 4. Williams got a yard on 3rd down, and Okezie-imo was up.

About a minute later, he was up on his teammates’ shoulders in the middle of a wild celebration. It’s the fifth 3-0 match in state public postseason history.

“We ran through game scenarios from different angles of the field to get me right,” said Okezie-imo about Friday’s preparation.

The Titans are back where they hoped to be at the beginning of the season. Last year, New Town was handled by Glenelg, 35-0, in the state semifinals. 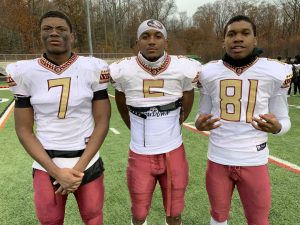 Gerrell Johnson (left) and Darius Broach was part of an epic defensive effort by New Town Saturday, and Samuel Okezie-imo put the Titans over the hump with a 19-yard field goal in overtime, sending the Baltimore County school back to Prince George’s County for a state 2A semifinal showdown with Potomac Thanksgiving Friday evening.

“Around this time last year we lost and the juniors who are seniors now I kept telling them to remember the feeling,” said Savage in his second season. “You don’t want to have that feeling again.”

“A lot of people doubted us and didn’t think we were going to be here,” said Johnson. “We’re all we got and all we need.”

AT HENRY A. WISE