Outlook: For the third straight year, the Eagles and Vikings will battle for the league title. St. John’s claimed the crown last season with a 12-6 victory after AACS won, 20-14, in 2015.

The Eagles swept the Vikings, 9-8, and 33-22, during the regular season. In the last match, Annapolis Area Christian scored the final 19 points to wiped out a 22-14 deficit. Quarterback Ryan Idelman threw two fourth quarter scoring passes for Annapolis Area.

Annapolis Area will try to slow down Derek Newton, who rushed for 184 yards in the last meeting, including a 98-yard touchdown run. Quarterback Sully Dowling rushed for 111 yards.

The Eagles, in their fourth straight title game in as many seasons under coach Mike Lynn, will try to become the first back-to-back C champ since St. Frances Academy (2011 and 2012). St. John’s seeks its fifth league title since 2007.

St. Mary’s hope to get another a big game from Donald Day as the Saints take on Severn School in the MIAA B title match. The Saints are seeking their first title since 2008.

Outlook: The Admirals and Saints will write a new chapter to their rivalry. St. Mary’s is riding momentum after routing Severn, 35-7, in their annual regular season meeting last Saturday.

Donald Day rushed for 174 yards and a touchdown, and the Saints’ defense The Saints’ defense turned four Severn turnovers into 21 points. They held Admirals to less than 200 yards of offense and had eight tackles for losses.

The Saints, in their first B final since 2008, have been led offensively by Day, quarterback Kyle Hill and a senior-laden front. Linebacker Timber Berzins, who’s committed to the Naval Academy, headlines a defensive unit that’s allowed 47 points in its last five decisions.

After a 8-0 start, Severn has dropped two straight. Quarterback Craig Stevens, a transfer from Glen Burnie, has been solid in guiding the Admirals’ spread offense with Dylan Gergar, Jacob Perreten and Owen Cauley, Joel Mandish and Owen Cauley.

Under first-year coach Duane Tyler, Severn is in its first title game since 2012. The Admirals last won the B title in 2003 (tri-champ with Archbishop Curley and St. Paul’s School). 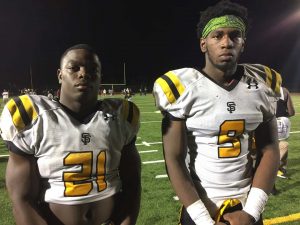 Joachim Bangda and Eyabi Anoma have led St. Frances to perfect 10-0 mark this season. The No. 1 Panthers begin defense of the MIAA A crown Sunday against McDonogh School in a semifinal at CCBC-Essex.

Outlook: In what some thought would be the MIAA A final weeks ago, the Panthers and Eagles meet in the first semifinal. The first meeting last month was a battle for No. 1 with St. Frances winning, 28-0, at Patterson Park.

Terrell Smith picked off four passes including a backbreaking 30-yard pick six early in the second half, putting the Panthers up 21-0. Junior Joachim Bangda rushed for two scores.

The east Baltimore school, ranked 13th in latest USA Today Super 25, has been dominant this season, outscoring opponents, 400-44. Junior dual threat quarterback Jal0n Jones leads the offense with a powerful trio of running backs in Bangda, Osman Savage and Nyjil Carr, and West Virginia commit Randy Fields on the outside.

Senior end and Under Armour All-American Eyabi Anoma spearheads a defense that posted six shutouts during the regular season. The Panthers became the first team to shutout McDonogh since 2012.

The Eagles struggled down the stretch, losing three of their final five games. Injuries have played part with key players Dejuan Ellis, Jabriel Johnson and BJ Farrare. Farrare, who suffered a foot injury in the second half of the first meeting with St. Frances, could be back for Sunday’s rematch.

McDonogh’s hopes of pulling the upset may come down to its ability to hold up against St. Frances’ depth. Penn State commit PJ Mustipher (6-foot-5, 300 pounds) is the area’s best two-way linemen. 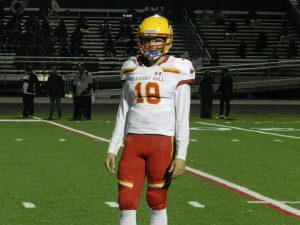 Outlook: The Greyhounds look to continue their resurgence. After winning just one league match last fall (2-9 overall), the Roland Park school won two of its last three decisions, including a 24-21 victory over McDonogh last Saturday evening in Owings Mills.

Gilman used a Piper Bond 34-yard touchdown pass to Zachary Dixon off a reverse and Khari Jones’ 75-yard punt return to stake it to a 17-0 first half advantage. Brandon Madison added a key three-yard touchdown in the third quarter.

Bond, Madison and defensive end/tight end Thomas Booker have sparked Gilman’s turnaround. The Greyhounds, in fifth-place going into last weekend, jumped to the No. 2 seed (won tiebreaker for most points scored in league’s matches).

Calvert Hall made a late run into the four-team playoff, beating McDonogh in its last league match Oct. 27. Trailing 21-7, the Cardinals got three long touchdown passes from quarterback Mike Campbell, two to Xavier Gravette and one to Cole Herbert, and Jordan McLaughlin rushed for two scores.

In one of several topsy turvy MIAA A regular season matches, Gilman defeated Calvert Hall, 35-28, Oct. 6 in Roland Park as Spanky Dixon’s one-yard touchdown run with 35 seconds remaining in regulation was the difference. The winning score was set up by a Greyhound blocked punt.

Madison rushed for 118 yards and scored three touchdowns for Gilman, which led 28-14 at halftime. Sophomore running back Sean Tucker had 121 yards for The Hall, and Campbell finished 15-of-29 for 194 yards and a touchdown.

The Cardinals and Greyhounds met in the first two MIAA A championship games, both won by Gilman (34-32 in 2011; 35-7 in 2012). If Calvert Hall wins Sunday, it will play in the final next Sunday at Johns Hopkins University’s Homewood Field.

The Cardinals would have three full days before their Turkey Bowl match with Loyola Blakefield Thanksgiving morning.