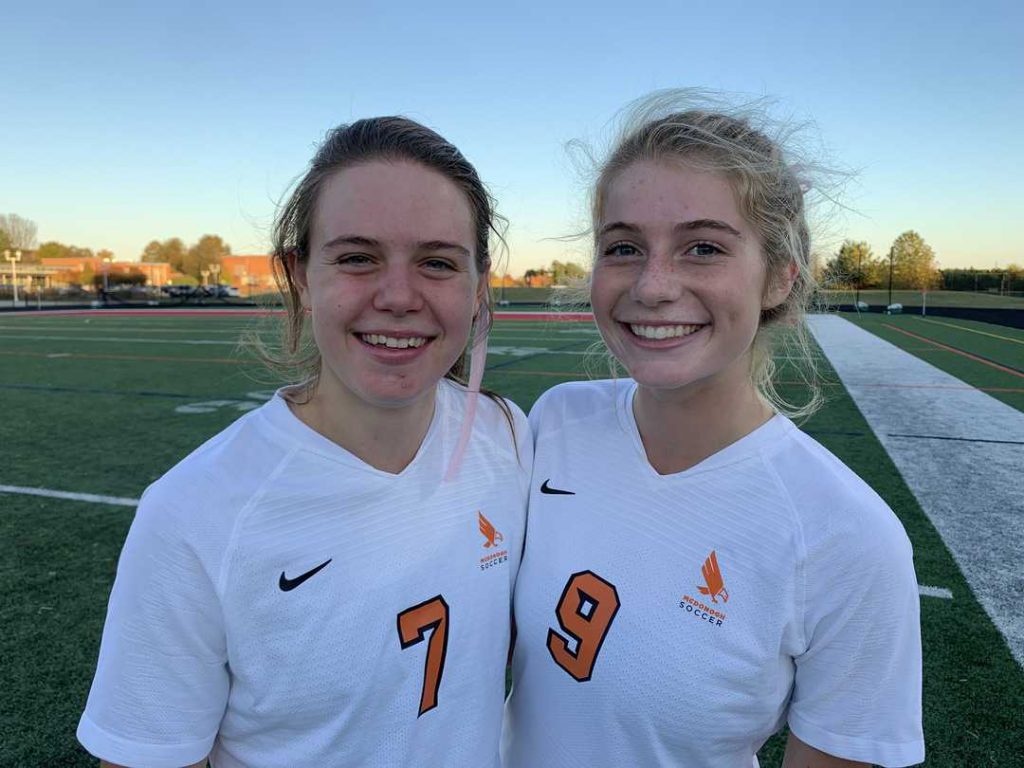 Heady plays from Baylee DeSmit (left) and Kemper Robinson helped McDonogh School knock off No. 1 Archbishop Spalding in the IAAM A Conference regular season finale in Severn. The win gives the defending league champ Eagles the No. 1 seed for next week’s postseason tournament.

The final game of the IAAM A Conference soccer regular season Thursday featured a glimpse of the past 11 years.

Second-ranked McDonogh School and No. 1 Archbishop Spalding have combined to win every tournament championship since 2008 and they squared off at Spalding to battle for the top-seed in next week’s tournament.

In another tight contest, McDonogh striker Baylee DeSmit took advantage of a rare miscue by Spalding’s defense to score the only goal of the game in the 66th minute.

“I think that’s just what soccer is. You need to come up in big moments and I’m just happy I did today,” said DeSmit, who scored 3 goals in the Eagles 5-0 win over the Cavaliers in last year’s championship game.

No. 2 McDonogh, Spalding and No. 3 Mercy all finished 5-1 in the conference, but the Eagles needed just that one goal against the previously undefeated Cavaliers to earn the No. 1 seed. It was so close that the Eagles didn’t come out on top until after the 6th tie breaker — point differential against conference opponents. The 7th tie breaker is a coin flip.

In September, the Eagles rose to No. 1 in the nation, topping USA Today’s Super 25 and TopDrawerSoccer.com rankings. A few days later, on Sept. 26, they lost to Mercy. The Magic crashed the McDonogh-Spalding stranglehold with a 1-0 win at McDonogh. Spalding had already beaten Mercy, 3-2.

The Eagles, currently 10th nationally by TopDrawerSoccer.com and 18th by USA Today, hadn’t lost to a team other than Spalding in two years and defender Kemper Robinson said the loss motivated her team like nothing else.

“Mercy, that was a big hit for us and I think after that, for these last couple weeks, we’ve really been on top of our game and we’ve been working so hard in training,” Robinson said. “I think, today, the first half was kind of a little rattled for us, because we were just a little bit off our game, but it was really awesome to be able to pull it out and I’m really glad we’re back in where we belong.”

For most of the game, both teams played smothering defense and neither team had many scoring opportunities.

McDonogh coach Harry Canellakis said the first half was “terrible,” but his team regrouped at the break and possessed the ball better in the second half.

“It wasn’t a normal performance from us. We’re usually a lot more fluid on the ball,” Canellakis said, “and I think it was playing against a good team, away from home, against our rival in the last conference game. You could see we were just edgy, but I was super happy with the way we played in the second half. It was smart… I thought we showed our experience at the end of the game as well. I liked the way we managed the game.”

DeSmit set up her goal by pressing the Cavaliers’ defense into their one critical mistake. The junior got the ball behind goalie Emma Murray, sending it toward the left post where she raced to tap it into the net for the Eagles’ eighth straight win.

The play started in the midfield.

“It was a great win on the header from Allison Peay in the midfield,” DeSmit said, “and I saw miscommunication between the two center backs and that luckily it popped for me that I could pass it by the goalie and hit it left footed into the goal.”

Cavaliers stellar center back Jessica Wallace agreed that there was a momentary mix up between her and the other center back Meghan Bernetti.

Just before the goal, the Eagles defense escaped a close call as Robinson cleared Sophie Thibeault’s slow dribbler off the goal line.

Thibeault took a pass from Ashley Tutas and got it past Eagles goalie Maddie Lowney, but Robinson thwarted the Cavaliers best scoring opportunity of the game. In addition to Robinson, defenders Cecily Pokigo and Alayna Lynchard played key roles in the shutout.

Now, coach Ashly Kennedy’s Cavaliers will try to avenge the loss in the tournament where they wouldn’t meet the Eagles until the title game.

McDonogh, which has won seven of the past 11 A Conference titles, has an opening-round bye and will host the Notre Dame Prep-St. Paul’s School winner in the semifinals Thursday.

The Cavaliers, 5th and 9th respectively in the latest USA Today Super 25 and TopDrawerSoccer.com rankings, open against Roland Park Country School Tuesday. If they advance, they will host the Mercy-John Carroll School winner Thursday.

The title game is scheduled for Nov. 2 at CCBC-Essex.

Wallace and her teammates, who are aiming for their first title since 2016, know the route to the title runs through McDonogh.

“They’re our biggest rivalry,” Wallace said. “They’re always our toughest challenge of the season, but I think we played our hearts out in this game. We’ll see them in the playoffs. We feel great about that, because we feel we were unlucky and when we see them again, we’ll push harder.”