St. Frances’ Angel Reese puts up a shot against Pallotti’s Jasmine Valentine during Tuesday’s evening early season battle for the area’s No. 1 spot in girls basketball. Reese scored 24 points as the top-ranked Panthers, playing their second game, topped No. 2 Pallotti in IAAM A Conference action in Laurel.

The No. 1 St. Frances Academy girls basketball players got off to the quick start they wanted Tuesday night at No. 2 St. Vincent Pallotti, which had already played four time as many games as they had.

Senior wing Angel Reese rebounded Pallotti’s first three missed shots and fed Khalia Turner for a 20-footer that turned into a four-point play. That sparked a seven-point opening run and St. Frances fought off a couple of Pallotti surges on the way to a 70-59 victory in the biggest showdown of the early IAAM A Conference season.

The Panthers from East Baltimore were quick to put the early win in perspective.

“This is a big win for us,” Reese said. “It’s the second game of the season. It was  a pretty hyped game of course. We have Riverdale (Baptist) Thursday, so we’re just taking one game at a time. Back to practice tomorrow.”

St. Frances (2-0 overall, 1-0 IAAM A) and host Pallotti (3-2, 1-1 IAAM A) both looked a bit rusty on offense and the fouls quickly mounted. However, St. Frances’ 7-0 start was enough to keep Pallotti from ever gaining a lead.

Pallotti tied the game at 27 in the second quarter, but St. Frances, ranked No. 18 nationally in USA Today’s Super 25, responded with 10 straight points and never again let the margin close within five.

St. Frances kept Pallotti off balance with a 2-2-1 press and dominant rebounding especially early. Pallotti didn’t get a single rebound in the first four minutes.

“We wanted to have a good start,” Shelton said. “Whenever you’re on the road, we always talk about defense first and I always mention just rebounding the ball, defend, you’ve got to bring your own energy, so that was important for us today. [Pallotti] is a good basketball team. It’s not the team from last year… I expected this.”

Reese, rated the No. 2 overall senior in the country by HoopGurlz, went on to score 24 points — 20 in the first half — and grab nine rebounds to lead the four-time defending A Conference champions.

“She’s a problem, always has been for four years,” Pallotti coach Joe Mathews said, “so when you can handle the ball and you’re 6-3. She’s a fun opponent, but she’s always going to be a challenge for anybody to play.”

Although Reese struggled with cramping and foul trouble in the second half and sat out about five minutes, her teammates wouldn’t let Pallotti catch up.

St. Frances led by 12 at the half, but Pallotti cut it to 46-41 with 4:24 to go in the third quarter. With Reese on the bench, Pallotti’s Jasmine Valentine hit two free throws and Jania Hall added a runner to pull within five.

Khalia Turner hit a three-pointer to bring the momentum back to St. Frances. Things then got a little chippy and Pallotti got a technical for something said after a heated argument broke out on the court. St. Frances guard Aniya Gourdine, who finished with 15 points, hit both free throws and five seconds later, added two more for a 53-41 lead with 3:38 to go in the quarter.

Pallotti, which added a handful of transfers this winter, including stellar point guard Eniya Russell, to a team that finished 7-7 in the conference last season. Tuesday, they proved they’re capable of giving St. Frances a run for the titler.

Although they’ve played five games, the Laurel Panthers are still working to develop their chemistry on both sides of the court.

“It’s early in the season and we’re still trying to figure each other out, especially in situations where pressure comes to us,” Matthews said, “so we made some mental mistakes that we’ve got to clean up and defensively, we made some mistakes. We’ve just got to get better from it.”

In the second quarter, Pallotti overcame what had been a nine-point deficit. They gradually whittled the lead down until a 6-0 spurt tied the game at 27. Russell, who finished with 19 points, sparked the run. The 6-foot senior point guard, who is rated No. 43 by HoopGurlz and has signed with South Carolina, was fouled on both of those baskets but missed both free throws.

Dakieran Turner answered with two free throws for St. Frances and Reese finished off a three-point play. Russell then went to the bench and a Pallotti turnover led to Daimoni Dorsey’s three-pointer. Reese then turned a steal into a layup and St. Frances ran its lead to 37-27. 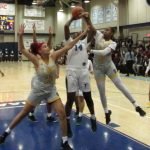