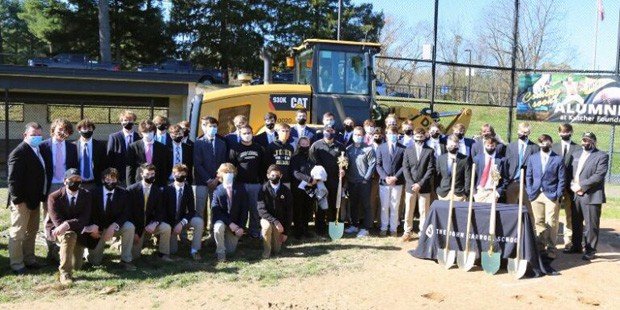 John Carroll School held a ground-breaking ceremony on Nov. 4 for a new baseball facility which include an artificial turf surface, dugouts, fencing and a removable mound to allow the facility to be used for softball. In addition, the plans include “equipping the facility with sports analytics and broadcasting equipment.”

Described as a collegiate-caliber baseball facility, the project will also include a state-of-the-art Innovation Center which will focus on STEAM, data science and media studies.

The new facility to be known as Alumni Field at Kutcher Foundation Stadium was made possibly by large grant from Kutcher Foundation, a Harford County based charitable organization which has a number of sports initiatives. The amount of the grant was undisclosed but John Carroll officials stated that it was the largest grant in the school’s history.

John and Sue Weller Kutcher, a member of the class of 1985 at John Carroll, run the foundation. Two of their sons, Steven ’17 and Tim ’15, are John Carroll graduates and their third son, Joe ’22, is a current student. All five were on hand for the groundbreaking.

“The Kutchers and the Kutcher Foundation have given John Carroll and its students an opportunity of a lifetime,” said John Carroll President Steve DiBiagio. “We are beyond grateful for their generosity, their kindness, and their strong faith in the future of our young people.”

Pictured above: Members of the John Carroll baseball team at the Nov. 4th ground-breaking for the school’s new state-of-the-art baseball facility.